Sometimes life throws you a curveball.  And sometimes that curveball goes around and around in a big circle at 175 mph.  We actually got a couple of them, named Irma and María, and as bad as Irma was for many places (including our new home state of Florida), María was the one that forced us to change our plans.  She carved her way along the southern coast of Vieques and then plowed straight through the mainland of Puerto Rico. 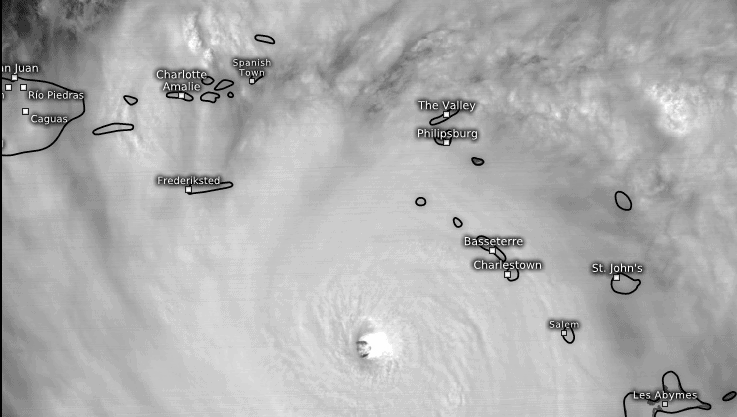 Maria's approach from the SE. PR is in upper left, Vieques is the long skinny unlabeled island near it

Both of those landfalls by María were problematic for us. The first one obviously for the direct damage it caused to power, internet, water, and the buildings on Vieques (esp. wooden structures).  Our rental house is concrete, but we still have not seen pictures or a damage report. But if a big enough tree falls on your house and opens up the roof to 2 feet of rain, then lots of bad things can happen no matter what the wall structure is.  But really at this point we're expecting the house to be OK, with some cleanup and repair work. We would love to be there, to help with the hard work ahead around the island, but we have been told repeatedly "don't come".  We just can't help at this point - maybe later.  Some better news though: to date, we know of no lives lost on Vieques, gracias a Dios! 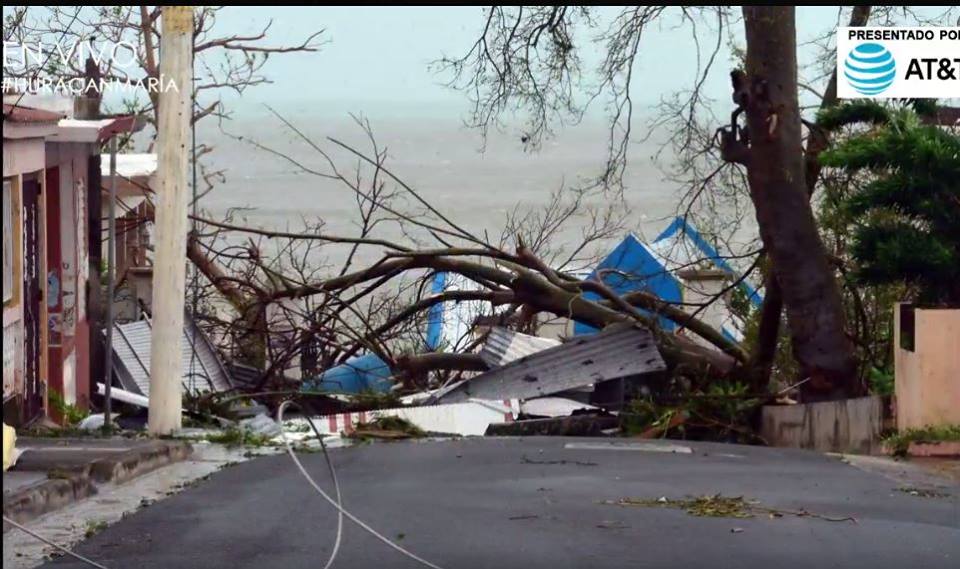 Vieques - can't get to the beach this way!

The damage done on the mainland (yes, the small-islanders call it the mainland) was much worse, with intense structure damage, power outages, communications wiped out, and massive flooding. It was the most powerful storm to hit PR since the 1930's.  Accurate numbers are hard to get, but the death toll is over 20 people so far, and it will climb. Now there's even a risk of a huge dam failure which could make things much worse for our fellow Americans in Puerto Rico. Thousands of people may be displaced because of that, or gamble their own lives. Desperation is setting in for many, and it may get much worse before it gets better.  And without the mainland to help, little Vieques will have to fend for itself for a while. 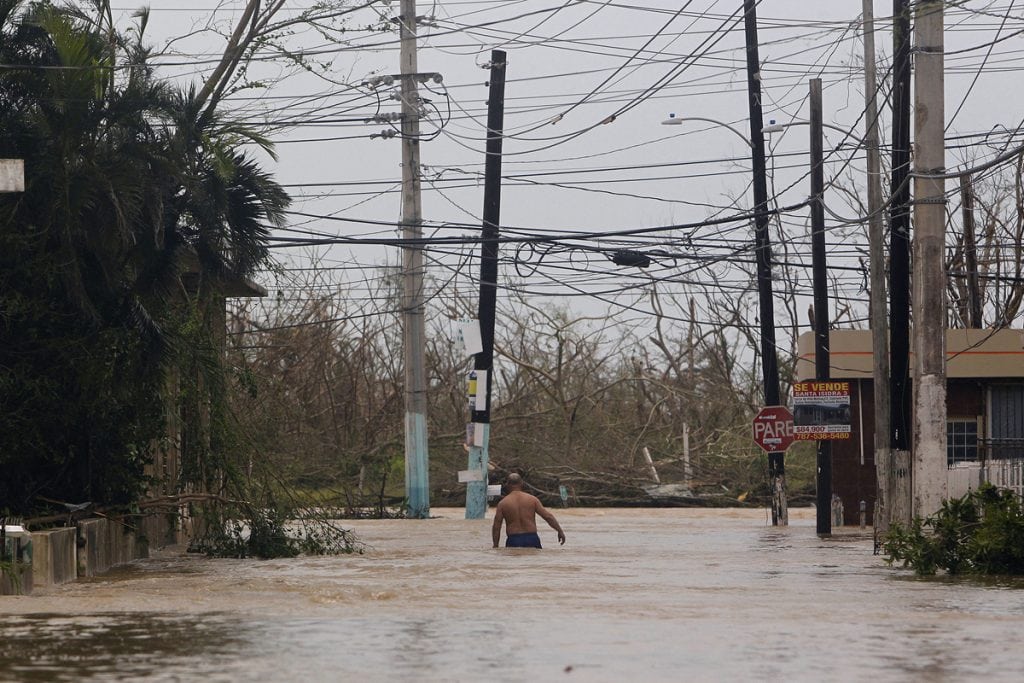 In mainland PR, flooding made things much worse

So with that backdrop, our inconveniences pale in comparison and I'll try to respect that. But after years of planning, research, emails, learning Spanish, befriending people, donating to worthy causes, etc. on Vieques, we're going somewhere else for a while.  If we were to go to Vieques now, we would instantly be adding to the victim count, with no water, food, electricity, etc.  We know they will recover, we know Vieques will be better than ever, but we have to let them do their work before we show up and make things worse.  Just restoring water and power would be a nice start for all.

For us, this is no problem - we have all sorts of options, right?  We sold all our stuff, all we have to do is pick another destination in the Caribbean (we got Caribbean souls we can barely control) and go there, right?  OK, so let's try: 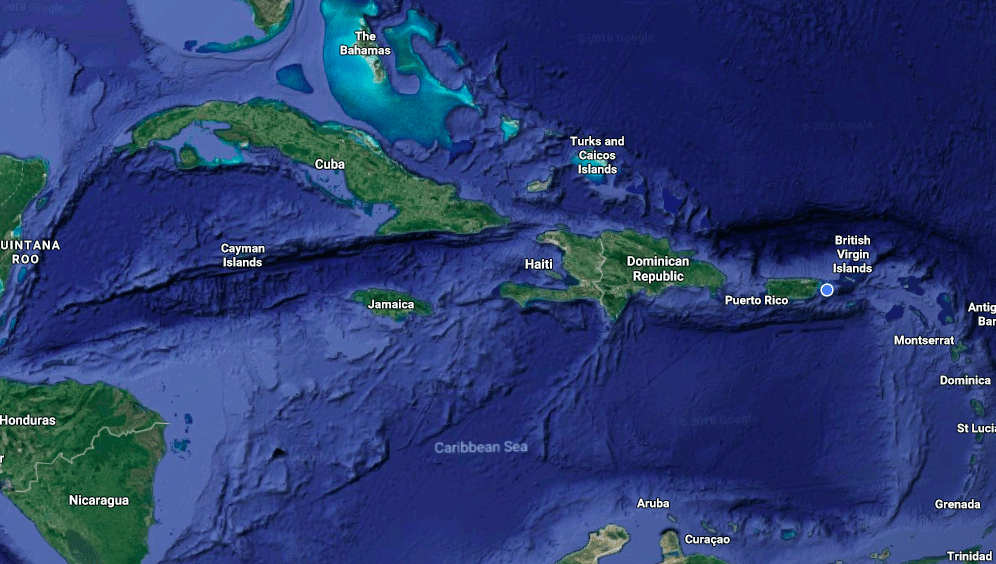 This has been a tough year for the northern Caribbean, and hurricane season isn't over, not by a long shot. Until we see the word December on the calendar, we can't stop ourselves from checking the latest forecast.  There are other places to the south BTW, that are doing fine, but we haven't researched every island down there and we don't want to just hop a plane to somewhere, only to find all sorts of things we didn't know about.  If you fail to plan, you plan to fail!

So the options were looking pretty thin, what to do, what to do?  We went back to some of our original discussions in the hot tub and began circling back to Grenada, Panama, and Roatan & Utila in Honduras. They are mostly out of the main hurricane zone.  Grenada continues to be a bit problematic with the dogs - we can get them there but there is also some confusion about the whole process. We still want to go there, but maybe a bit later. We're saving Panama also, and Roatan might be too popular for us (too many people?!).

So we have settled on Utila, Honduras (at the far left of the map above), an island even smaller than our own little friend Vieques.  I think it's about 8 miles by 2 miles, depending on the tide tables. They are very modern though, with actual food, water, electricity, and wifi, plus I heard there are around 20 cars on the island, so that's pretty sweet. And I'm pretty sure they have rum.

Utila (Oo-tee-lah), with a population of 4000 people, is one of those islands you get to from another island (Roatan) or from the mainland, but only in a small plane or boat.  No cruise ships, no international flights, it's pretty quiet except for the bubbles from the snorkelers and divers that come to swim the Mesoamerican Reef, the 2nd largest barrier reef in the world. The island is only a few miles from Belize, and we may even take a boat over there to see Placencia, a well-thought-of beach community there. There are some nice beaches on Utila too - not like Vieques with 40 of them - but we're going to enjoy every bit of what Utila has to offer, I can assure you of that!

We are getting typhoid shots and will probably take anti-malaria drugs; also we're up to date on tetanus, influenza, Hep A, that sort of thing. It's not exactly the good ole U.S. of A., but that's kind of the point isn't it?

The dogs had to get international health certificates to show they aren't walking, barking carriers of disease. The photo is them at the vet's office waiting for their clean bill of health. 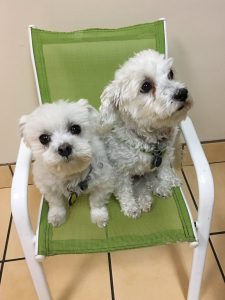 The Vet said we passed the test! We're going to Utila!

A note about crime: yes, we know Honduras has a very high crime rate. But the places we are going do not, and we will avoid those which do (basically the big cities - it's mostly all about the drug trade) in the same way we will avoid the worst parts of Detroit, St. Louis, etc. We will use reasonable caution believe me, but we're not going to live our lives in fear.

So, anybody have any last minute travel changes, esp. international travel, to tell us about? Anybody gone so far as to see the inside of a foreign jail?  (we're not considering anything sketchy but you never know what life will bring!)  Leave your comments below!

Posted in Travel and tagged Dogs, Weather
← Still! Too Much StuffBig Planes, small planes, and tuk-tuks! →