Before we completely leave my home town behind, let's talk about the heat and humidity for a minute. A lot of people (especially those in Colorado) think that Florida is so hot you can't live it in, or if you do, you can never go outside.  I'm here to say that's not true!  It's been running in the high 80's / low 90's every day while we've been here this summer, averaging about 70% humidity (except when it jumps to 100% and the sky turns into water). We're not freaked out about the heat at all, Deb definitely isn't - she absolutely loves it!  And I like it much more than the cold but my thought is that if it wasn't for the heat then cooling off wouldn't feel so good.  And there are myriad ways to cool off.

We do and will have AC anywhere we are going to live, but not always covering every square foot. Mom's house had central air, and also a pool which is the best for cooling down quickly. We have a place on the west coast of Florida set up next and it also has central air, but no pool. In either place, a walk or a bike ride to the beach is always a winner for the ocean breezes and the water. The place where we are planning to stay in Vieques, PR has air in the bedrooms only. It's on a hill and we're told it gets good breezes so we think that will work out well. I also discovered that tank-tops with their extra air flow are cooler than t-shirts, so I bought one tank-top and made a couple more out of t-shirts and some handy scissor-work. There are other creative ways to stay cool, but that's a start.

BTW, while tank-top shopping I did find a pirate flag for my island girl - arrrh!  That doesn't cool me off though! 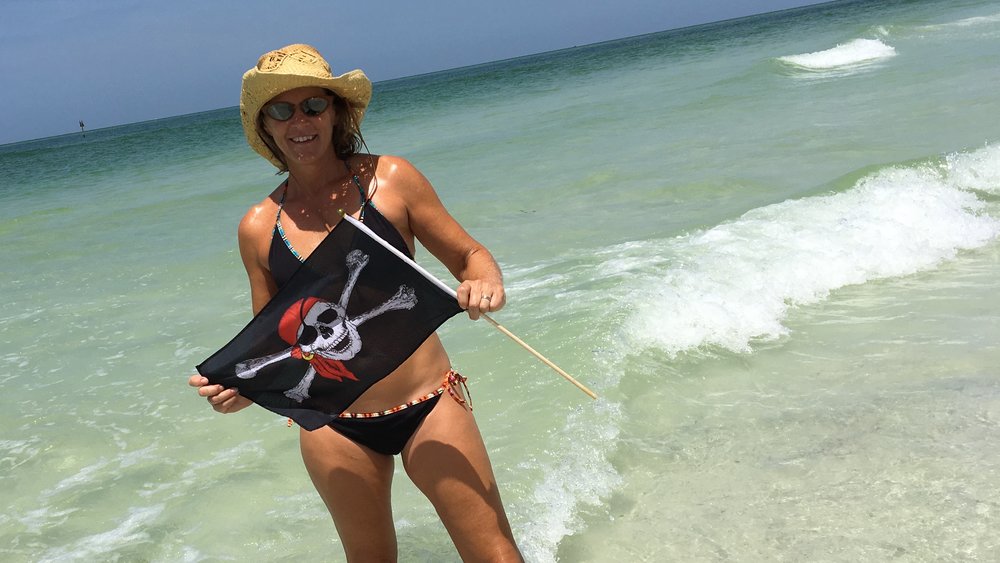 Traded it in for a whole 'nuther world, a pirate flag and an island girl!

Back to the heat/humidity, we have a habit of spending significant time outside here and as long as you're sitting, reading, listening to music, surfing the net, etc. it's fine. For me, it's a way of acclimating myself for the islands.  But as soon as you do anything in the heat of the day the sweat just starts to pour off of you.

I think this would look good on me

Because of this, I need a sweatband for my head to keep it from running in my eyes, what do you think of this choice?  I actually don't mind sweating at all, it feels like I've done something, even when I haven't! 🙂 All the rain doesn't hurt either for cutting the heat.

Along with the heat come the mosquitoes, probably my least favorite part of the tropics. They simply love my um, aroma I guess, and always invite their friends over for my boeuf du jour, my carne del dia. So I'm a big fan of DEET, window screens, and sea breezes, in no particular order. But those do nothing for the phantom bites I always seem to get just after I see a mosquito, then lose track of it. 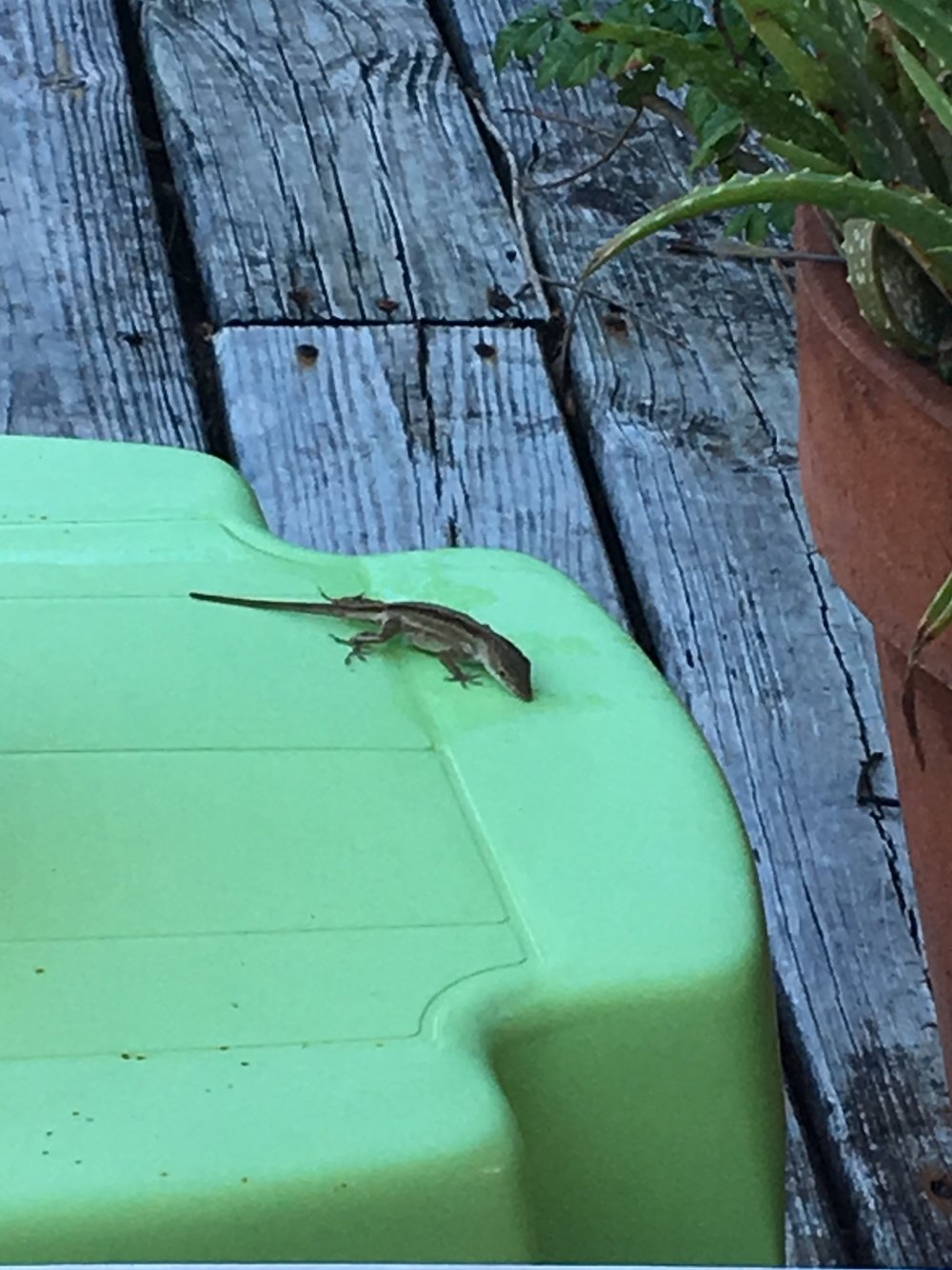 Drinking a few drops of water that were left behind

At Mom's house we sat outside a lot, and it's fun to watch the anoles, I'm sure she has hundreds of them. They are small lizards which eat several types of bugs, but not mosquitoes as far as I know. Too bad, but I do like them. As mentioned before, we also sat outside most nights in the dark, star gazing and chatting. One night we saw the cat walk down the fence-line, next to the pool. Except we were pretty sure we had put the cat in the house earlier. I pulled out a light and went around the corner to see the face of an opossum staring back at me! I don't know much about them except that they have teeth and claws, so I just backed away...

The more interesting wildlife around here is in the ocean. We saw what the surf-fishermen brought in on the beach, including small sharks, whiting, pompano. And we saw plenty of bottlenose dolphins out in the water, along with a favorite, the pelicans. In fact, one morning we got up early to see the sun rise over the Atlantic.  There was a school of some sort of baitfish about 100 yards offshore, we could see the water churning around them, and the dolphins and the pelicans were simply feasting out there. It was great to watch! 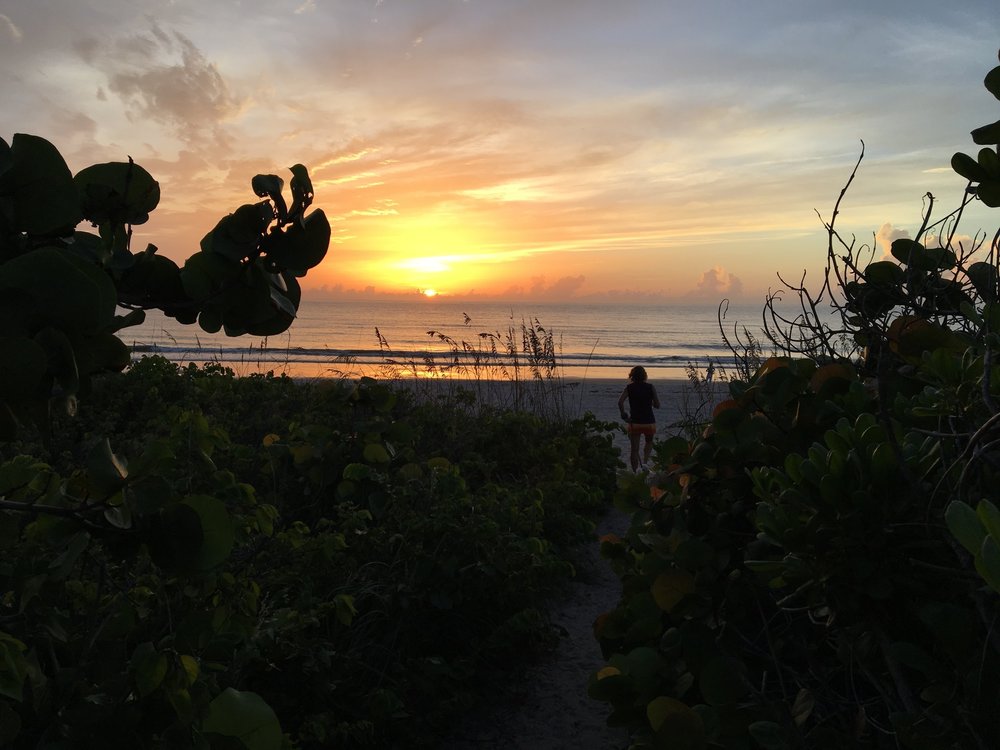 Sunrise is a rare sight for us, and most people!

The absolute best though, are the sea turtles. We mostly get loggerheads around here (with a few greens and even fewer leatherbacks) and it's a real kick in the summer and fall. The mommas come up at night to dig their nests in the sand and lay their eggs (over 100 at a time!). A couple of weeks back we walked a beach with turtle tracks in the sand from the high tide line up to the dunes, every 20 feet or so, and they went on for miles. A few nights before, we saw one laying at night just down the beach from my Mom's house. A couple of months later, the babies will hatch and dig their way out of the sand; again it is common at night. It's certainly the safest for them – as a kid I remember seeing sea birds chowing down on them while they tried to dash to the sea at midday.

During this trip, one momma got a little behind schedule. We were fortunate to catch her slow trip back to the water at one in the afternoon! It was almost comical how bad her timing was, crawling through the scorching sand in the heat of the day, but to her credit she did her job and made it back to the water.  In these videos I was halfway between cheering for her and scolding her, LOL!

Finally, I will say I have been a little surprised at the beauty and charm of the Space Coast, after having seen many other places in my life.  It was a pretty special place to grow up, even though I may not have realized it then!  That's it for now, as usual I made a short story long. It's a character flaw that I'm working on. See you next time, probably on another beach.