Puerto Rico is filled with fun-loving people, and they have some great traditions that are focused simply around having fun. The Christmas holiday celebrations are probably the best known - they go on for weeks, well into January. During this season they have a tradition where they “surprise” a friend in the middle of the night with music and singing at the front door. This is called a parranda, and the surprised friends are supposed to have an “impromptu” party for the revelers. It’s an amazing and hilarious twist on Christmas caroling, and to us, it sounds like a lot more fun. Now when they wake us up in the middle of the night we might have a different answer!

It's only August as we write this, but we felt like kids on Christmas morning a couple of weeks ago. We were honored to be invited to join in on another great Puerto Rican tradition - one they call Chinchorreo. We were invited on a weekend trip with our neighbors’ family, and we jumped at the chance. This finally gave us a chance to go over to Puerto Rico mainland. Well, we always had the chance, we just never made it happen. It seems we needed someone to take us by the hand and lead us around, and that’s what we got with our friends Ricardo & Sandra. They told us this was a family trip and that we were family now - we felt pretty special!

With their help, we actually rode the ferry to the mainland and back, and it wasn't a total disaster! It actually wasn't a disaster at all, but for a while there it tried to be. We'll probably discuss ferry riding in a future post as we expect to be doing more of it in the coming months. From the ferry terminal, it was off to meet some of the family members we were going to be spending the next day with, and then we went off to dinner. Our friends saw several Viequense acquaintances over there, proving that lots of people come over on the ferry everyday. It was all lots of fun, but nothing compared to the next day.

We met the bus on a Saturday morning with about 40 other people, in a mall parking lot in Carolina. This is near San Juan in the northeast part of the island. I’m not sure if every last soul besides us was family, but we were definitely the outliers, with our limited Spanish skills. But these are Puerto Ricans, friendly as always, and they pulled us in to their fun. Though 90% of the conversations were in Spanish, only half of which Deb could understand (and I even less), several of them spoke English to us when needed. We all loaded up our coolers full of beer and other drinks and headed out. 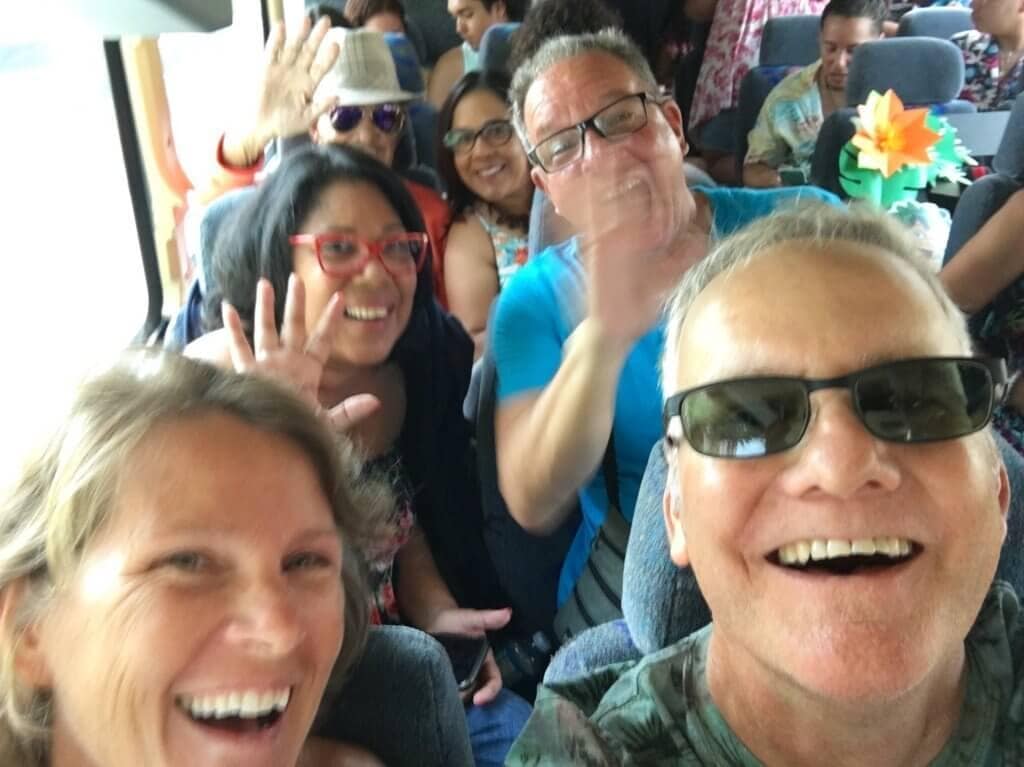 This trip was in honor of our next door neighbor, the patriarch of the family, whom we call Papi. With party music playing, it seemed like only a few minutes before we were heading south up into the mountains which span the entire center of Puerto Rico. Everything was nice and green, which wasn’t a surprise since we were in the proximity of the El Yunque Rain Forest. The rain forest receives about 120 inches of rain per year (10 feet!). While that was going on, the drinks were already flowing, with one friendly guy named Frankie walking around pouring shots of caña, which I think is the same as pitorro, but I’m not sure. I am sure that it was a highly alcoholic drink with fruit and spices added. This was before 10 a.m. BTW, so we took it slowly. We took extra precautions when were told they didn’t just want to see us drunk, they wanted to see us “Puerto Rican drunk”! 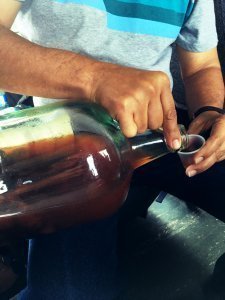 How to get "Puerto Rican drunk"

A Chinchorreo in the most basic sense is a group of people cruising around and having some drinks and food and having fun. In this incarnation, it is a 10-hour scenic booze cruise with lots of stops for pictures, strolling around, eating, and more drinking. Deb and I were all in on this trip, but we also didn’t want to be sleeping on the bus by noon, so we tried to pace ourselves. I hope we didn't disappoint them too much!

The first stop was a highway underpass where a huge Puerto Rican flag is painted - it's a great example of the pride they have for PR, the flags are everywhere. Some people got pictures taken there, and we moved on toward the coast. 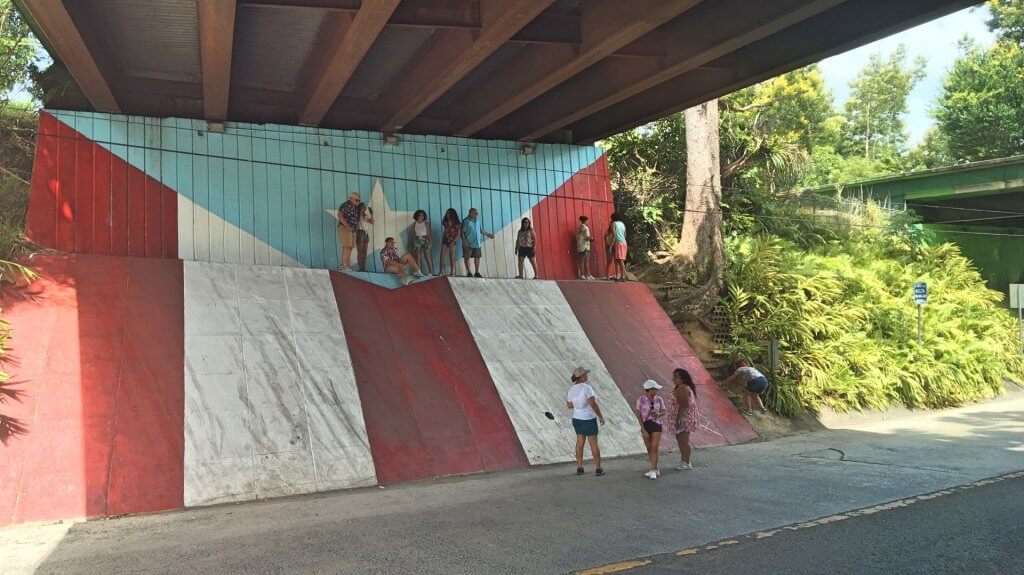 As mentioned, the scenery on the "wet side" was green and mountainous, and surprising to me because instead of pines and aspen trees there were palm trees and bamboo! As we neared the peak of the ridge, in a town called Caguas, it started to dry out. It looked a lot like the Colorado mountains we are so familiar with, and as we went down the dry side it looked like something out of New Mexico or Arizona. It was desert dry, with some hills, falling away into flat plains. But it doesn't stay that way for long, because before long you are approaching the south shore of Puerto Rico, the Caribbean Sea, at a town called Salinas. 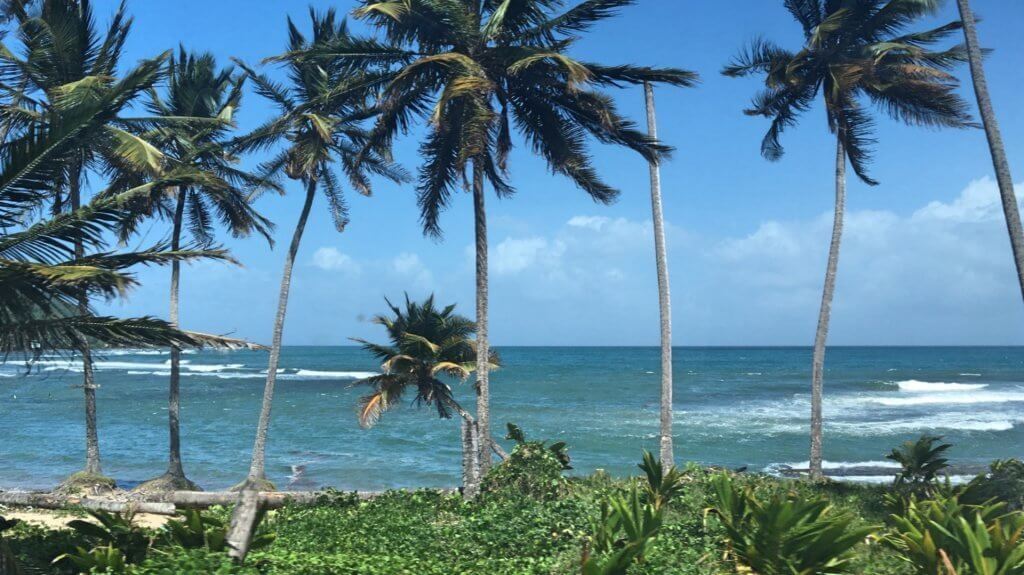 In this area, we made several short stops for food to grab, drinks, and to stretch our legs. We ate some pastelillos and Deb got a whole chilled coconut, with a straw out the top. At one stop, there was a line for the women's restroom. Music was playing as is always the case, so all the women just started dancing while they waited in line - classic Puerto Rico! 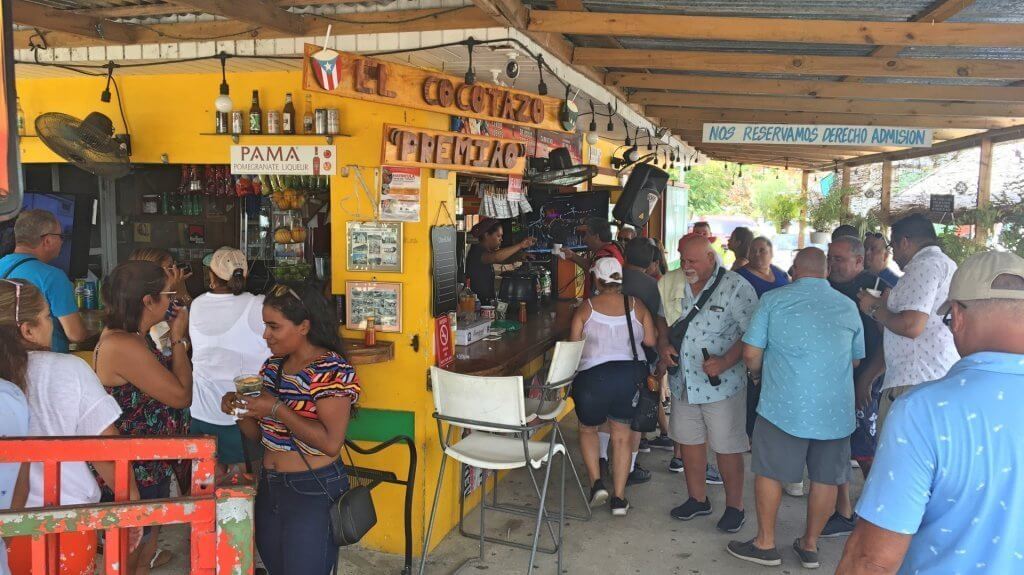 The dancing wasn't just going on in restroom lines though, oh no no! On the bus, it got crazier and more fun with every round of beers and caña. Every time the song "Calma" came on, by Pedro Capó, Deb was required to get up and lead the singing and dancing! And the younger people in the back of the bus brought these great tambourines and other instruments to lead the whole group in song. They had a bunch of folk songs in the repertoire, many of which were taught to them by Papi. And then there was the song El Chinchorreo, which was not just fitting, but required listening! "Este fin de semana, nos vamos de Chinchorreo!" (This weekend, we're going to Chinchorreo!)

At one point, we made a longer stop at a waterfront restaurant for lunch and of course, more drinks. We were making our way toward the east along the coast and then following it northward as we went. One stop was at a ruin of a building that has been painted up by some true artists. It has a tree growing up out of the middle, and a wide swing is set in the large front opening, for the perfect photo op. Other Chinchorreo buses would drive by and honk and wave, everyone sharing in the fun. It was then that I realized our air conditioned coach was a luxury accommodation, compared to the open air recycled school buses of the other trips. But they seemed to be having just as much fun as we were! 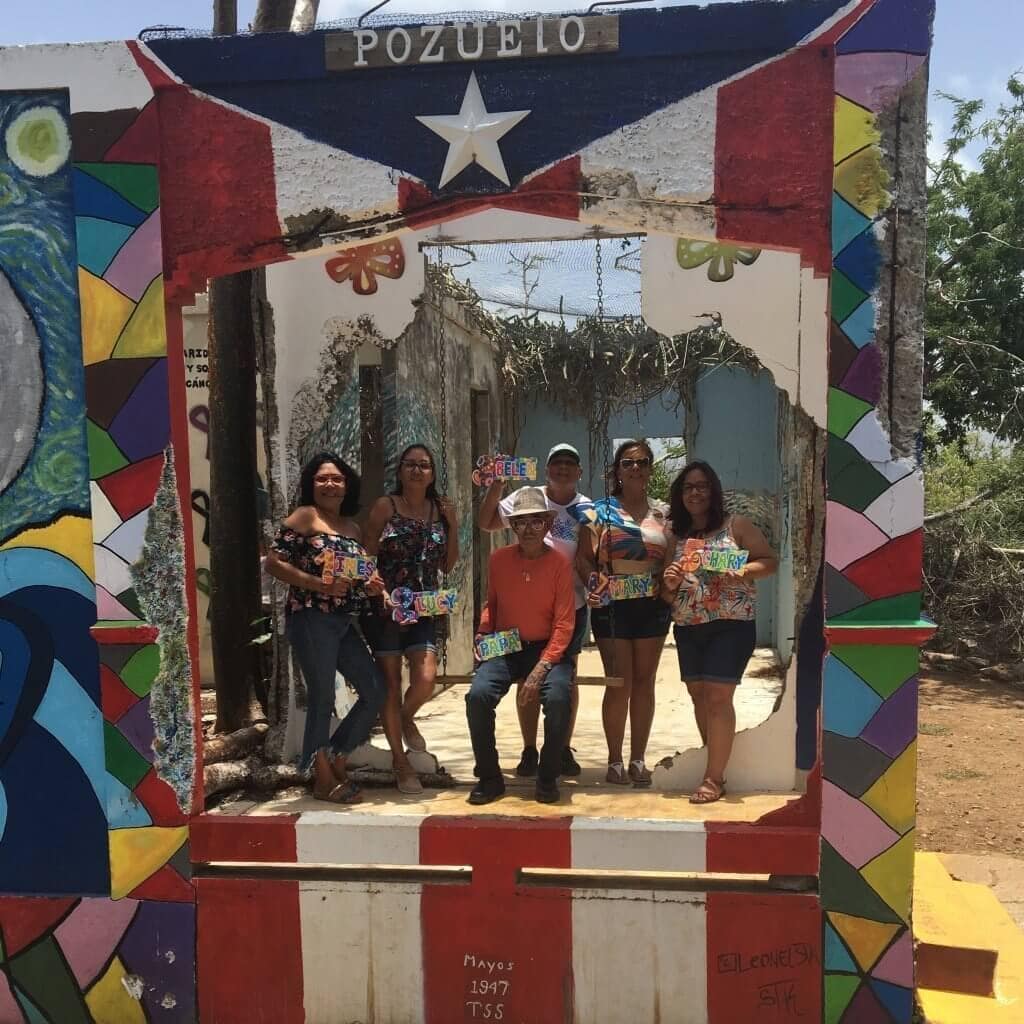 Papi and his 5 daughters

As the day marched on, so did the music, and at one point the whole group was singing a song that went around the bus, naming each person in turn. We didn't know the words, but we sure knew what to do when they called out "Deb", and then "Norm" - of course, we danced! There were lots of songs, including this one. They went on all day!

Later in the afternoon, we stopped at one ocean overlook, high up on a hill, and took some funny pictures and generally clowned around. Eventually, the bus turned inland again, signaling to us that we were headed back to our starting point. It wasn't a sad ending, we were all exhausted by that point! We said our goodbyes in the dark of the Old Navy parking lot, but not before Frankie gave us his big bottle of caña, the one made with grape juice - "es suave", he kept saying (smooth), and it was... 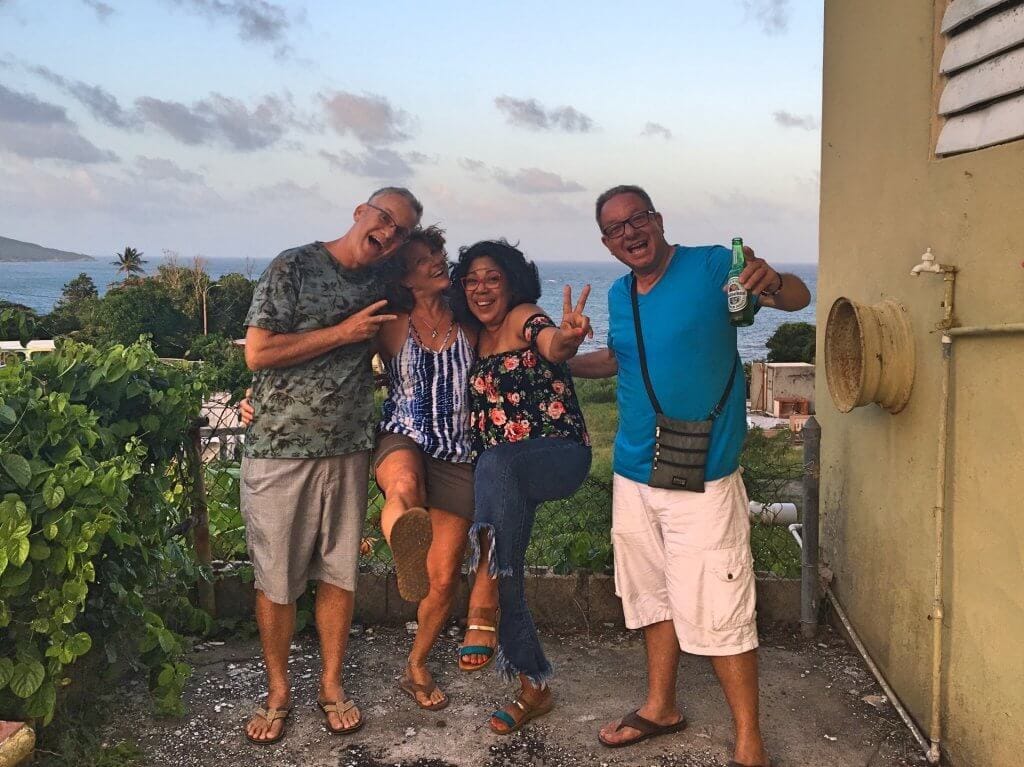 And so ended one of the most memorable days we've had in Puerto Rico. "Family", food, drink, and so much fun! "Este fin de semana, nos vamos de Chinchorreo!"

TODAY'S SPECIAL: Even Farruko wants to "Chinchorro, Chinchorro" in this version of Pedro Capó's "Calma"!