I love Texas, but I don't consider it “The South”, or part of “Dixie”. I see it as a close neighbor, but really part of “The West”. I'm probably wrong but when I think of Texas, tumbleweeds and prairies come to mind, not Spanish moss and Kudzu. In any case, when we passed through from Texas into Louisiana, I felt like we were truly in the South. We were in Dixie. 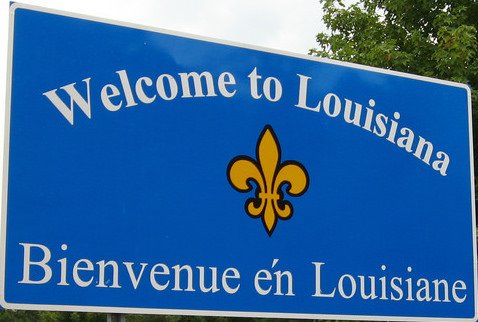 All those hours studying Spanish - wasted!

Adventures were in store, so off we went toward Baton Rouge, LA. Baton Rouge is the capital of Louisiana, and is known for its fried catfish, Cajun food, Creole food, Southern food, more food, and Louisiana State University (apparently we like college towns and state capitals, Tallahassee next? - probably not). We got to town, found a local bar with Wifi and a patio that allows doggies, and FaceTime'd with our Friday beer friends, Mark and Maureen! It was great – a little hard to hear in that place – but really nice to keep up the tradition and to catch up with them. This is one of the things we're relying on to stay in touch with our friends and family. Anybody else want to FT with us? Just let us know!

We stayed in a cheap chain hotel (which is dog-friendly) for a couple of days and enjoyed the Baton Rouge area quite a bit. My favorite quote from Deb, “All hotels have hookers, don't they?”. Well, ours had at least one (OK, probably more than one). Deb and the housekeeper had a conversation about them, the police raids with thongs flying, and all kinds of hilarity (not funny to the housekeeper, but funny to Deb!). It was pretty obvious late one morning when a customer was trying to act cool walking around on his phone, figuring out what room to go to. Later we saw his “business partner” and that told us the rest of the story! On the positive side, we really liked the room and the hotel employees were super nice people; they made our stay so enjoyable we stayed an extra night there vs. somewhere down the road. The local area was pleasant as well, close to campus, lots of greenery, it's a pretty place.

We enjoyed bike rides around the LSU campus (with the dogs in the saddle-baskets of course!) and po'boys and just being in the South again. Another favorite quote from Deb, “I'm not from the South, but I got here as soon as I could!”. Everyone we met was really friendly and I even heard a “Go Gators!” from a guy on the campus (he saw my t-shirt). I'm sure my Tiger friends hate to hear that, but it happened! It was a quiet day on campus – it was summer break after all and a weekend to boot.

We rode to the stadium and took a couple of pictures at the Tiger statue. I wore my Florida Gators t-shirt but I tried to show an adequate level of respect. After all, we still we want to stay friends with our LSU buddies, and I didn't want to get beat up! 🙂 We rode around the lake and saw turtles, lots of turtles, and just had a great day there. 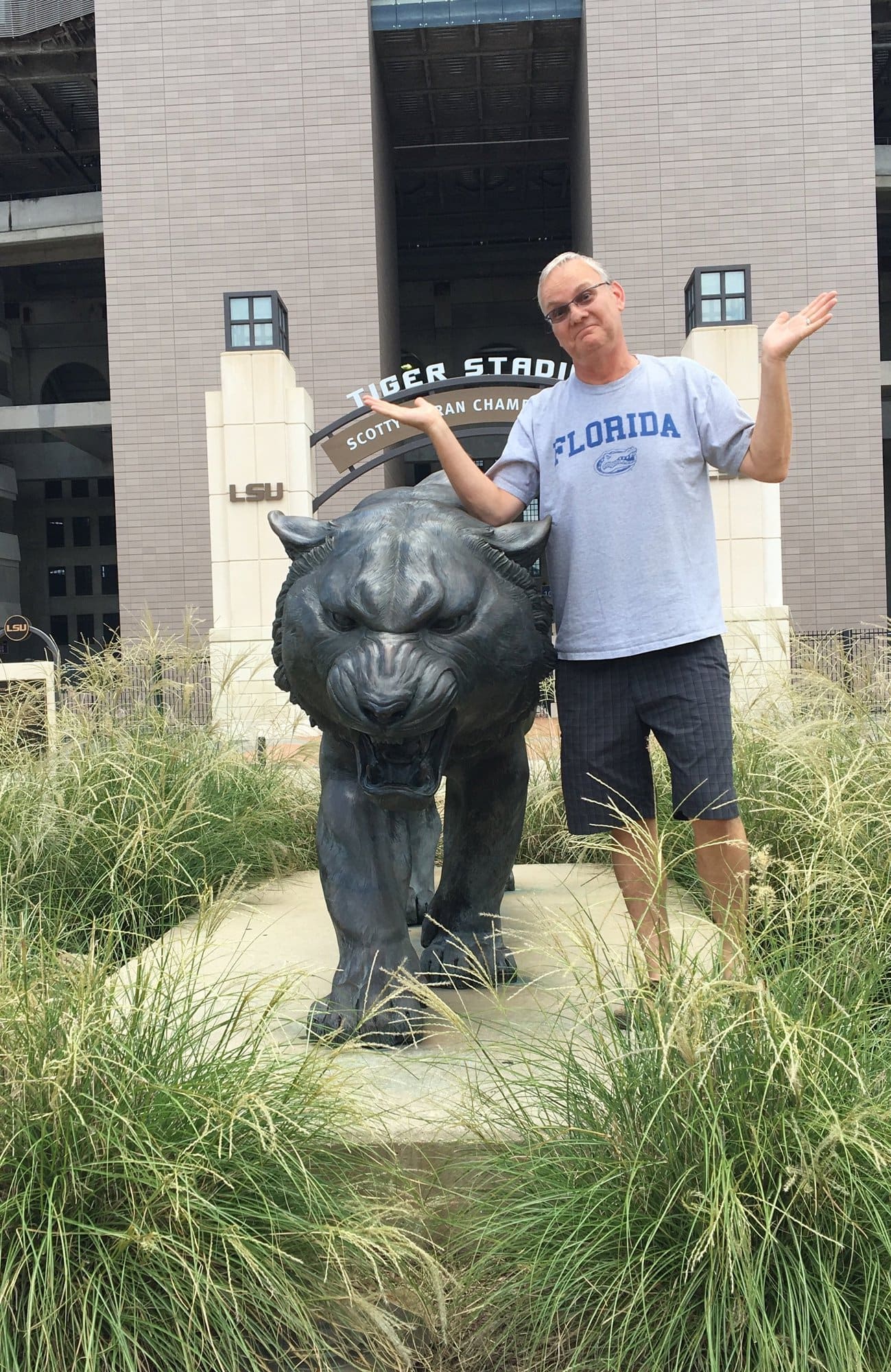 Rivals, but with Respect?  Yes, respect! 🙂

Next was a quick stop in Mobile (Moe-beel!), Alabama that was really just to get a day trip over to Dauphin Island (sounds like dolphin without the L). We needed to see some big water, and that's what we found. Dauphin Island is a barrier island on the Gulf of Mexico, which you can reach by car over a causeway. The public beach is very different from other barrier island beaches I've seen (I grew up on one in FL) in how incredibly wide it is, two or three hundred yards of flat sand and grasses; it reminded me of the salt flats in Utah. There was a pier across much of the flats with beach access off of it, and we used it to take the Littles down to the beach to experience water.

Now Maltese dogs aren't known as “water dogs”, so we held them in our arms and took them out in the relatively calm water. They weren't thrilled, but they had to trust us, and it went pretty well. They certainly liked cooling down in the water on a hot humid day, even if it did make them nervous. This water wasn't the beautiful blue water you expect to see in the Gulf either, it was kind of blue/green/brown, a little disappointing. We didn't stay out long; the doggies soldiered through it and were really happy when we came back to shore and let them down! 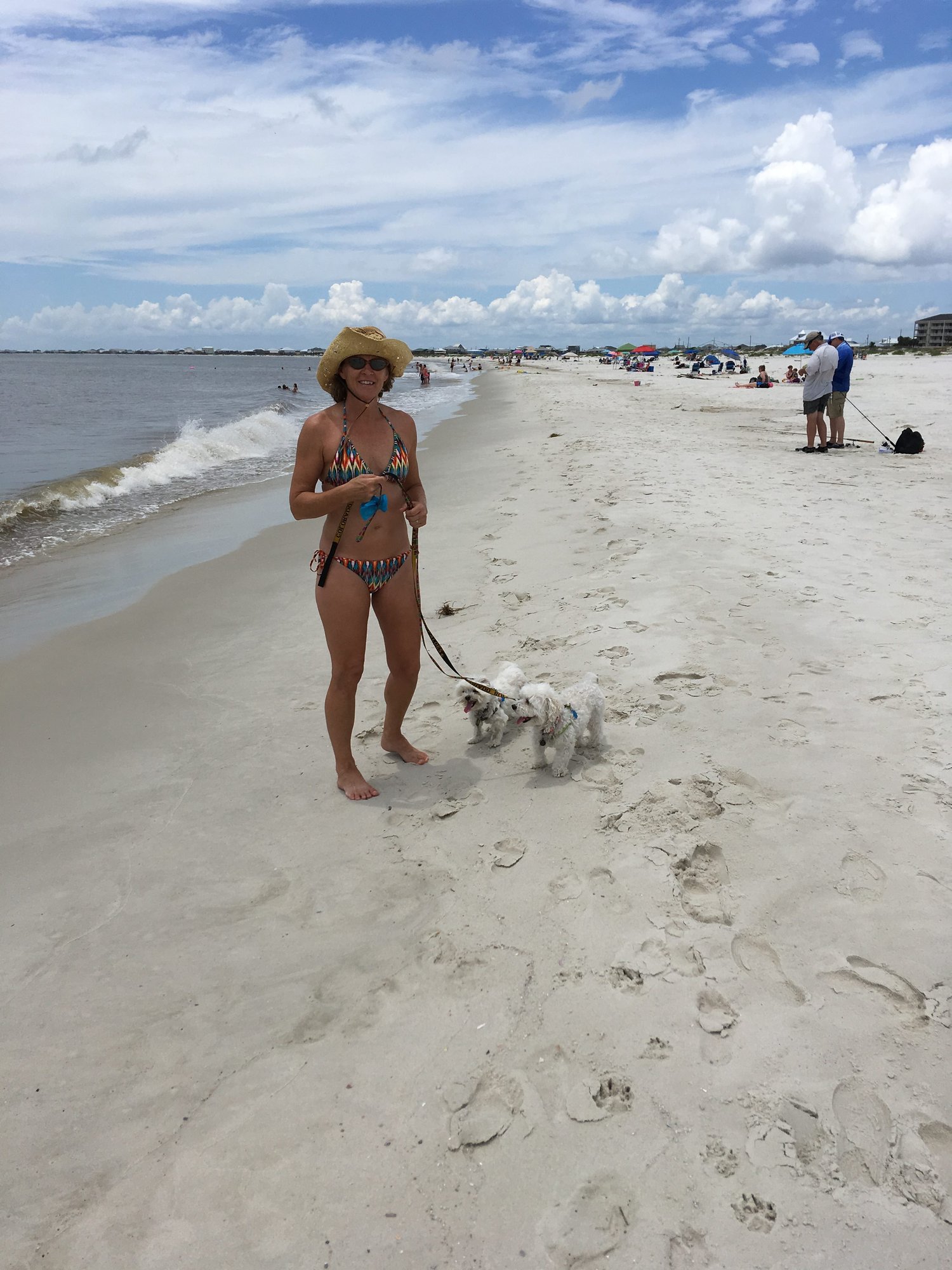 Later we had a po'boy and sweet tea at the docks on the other side of the island. We watched boats and pelicans and seagulls while we munched on our lunch, it was really nice. Then we headed back across the causeway to another cheap hotel.

We had planned to camp more on the way south but I pretty much wimped out on that due to the heat (I don't know why this was a surprise in July) as we headed farther south. So cheap hotels it was; it was all good though. Starting from Colorado, in every state we saw signs that said “Bridge ices in cold weather” or something to that effect. We saw it in CO, OK, TX, LA, MS, and AL. In each state, we said that is not acceptable – we had to go farther south! 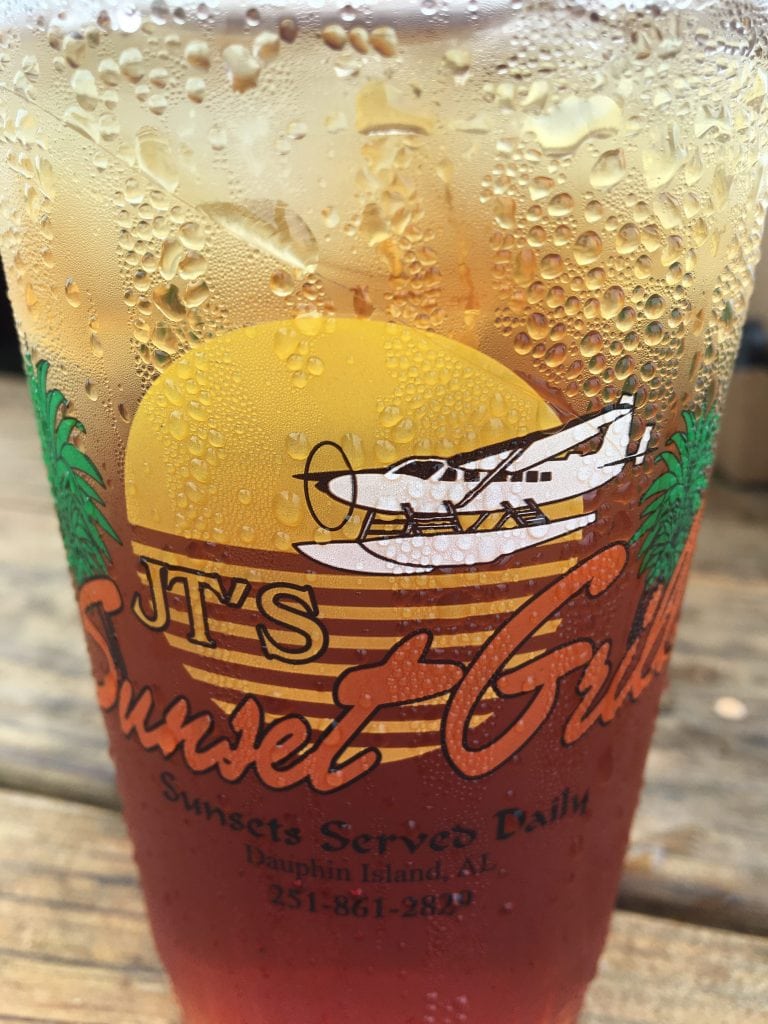 Sweet Tea, or as it's called in Dixie, Tea.

The following day, we FINALLY made it to Florida, yay! But before we even drove across Mobile Bay into Florida the air had turned into water. Rain, rain, and more rain! There was a tropical system off shore that was making itself known in the panhandle of FL and all along the Gulf Coast for a couple of days. It was glorious. You simply don't see that in the middle of the country and we enjoyed it a lot. I was reminded of one of my dislikes about Florida though – the (over)use of air conditioning. It's raining buckets, you get wet, and you go inside a store, restaurant, etc. Guess what - it's freezing in there! We actually had to pull out long sleeves from the bottom of our duffel bags to stay warm – no bueno! I guess it's a small price to pay for not seeing the “bridge ices over in cold weather” signs any more! 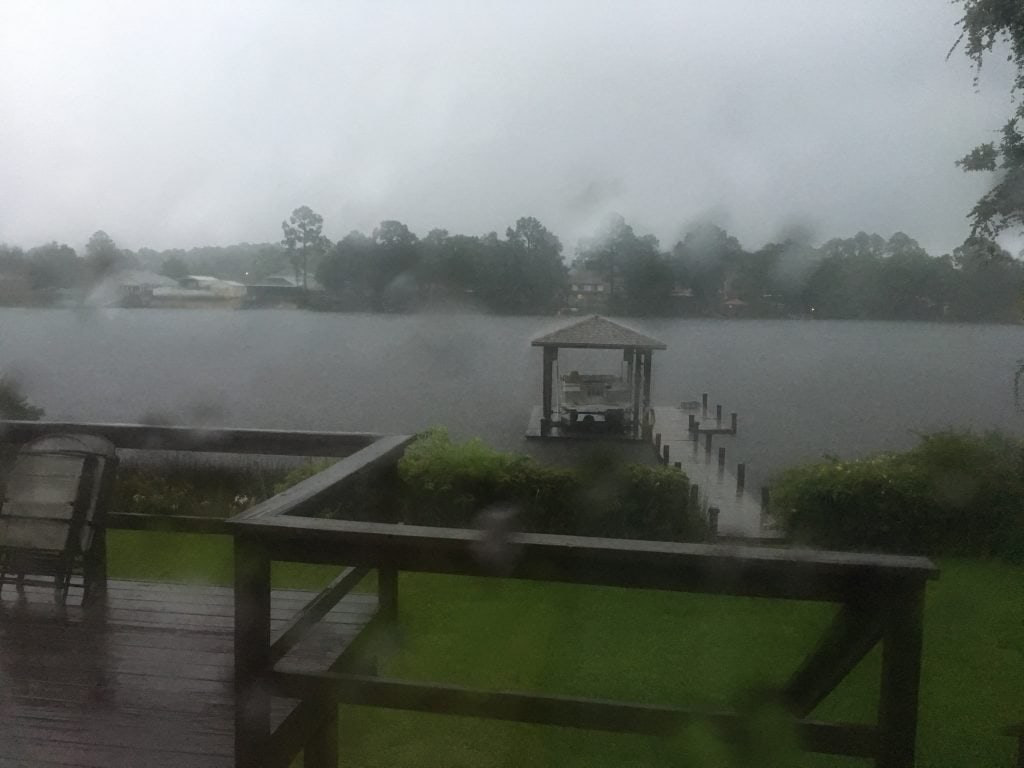 We spent a few days in Panama City with my friend Kirby (no relation to the dog Kirby). He has a great place on the bayou, with a dock and a pontoon boat! It was a little bit of talking about old times and a lot of catching up with current happenings. He is a world traveler so we got to hear about his latest trip to Mexico and his next one to Tel Aviv, and many others.

We also got to enjoy several of his favorite local spots, probably the highlight of which was watching Deb scarf down a bunch of baked oysters with “double” Cajun seasoning on them! They were “slap yo grandma” good – if I'm lyin', I'm dyin'. 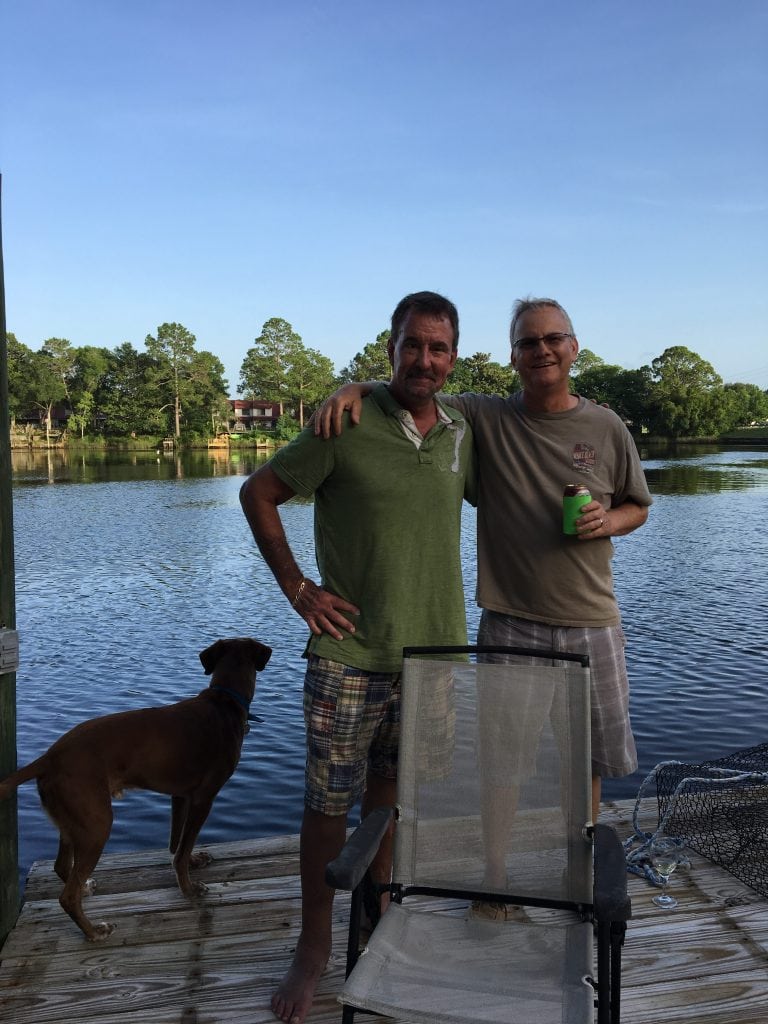 Once the rain blew on by, we had another highlight of the trip – out in the boat on a blue sky day to scare up some lunch, or dinner, something – I don't know what time it was nor did any of us care. We went under the bridge and down the bayou, across the bay and into another bayou, grinning the whole time! Deb and I both got to steer the boat, but she looked much better doing it. When he's asked how fast his boat goes, Kirby answers, “I don't know, I'm right where I want to be!”. And we were. There's nothing better to me than idling up to a restaurant in a boat, tying off, and stepping right up into the open-air restaurant with all of our dogs. Even better, eating fish for dinner that slept in the ocean the night before – that's good eats! 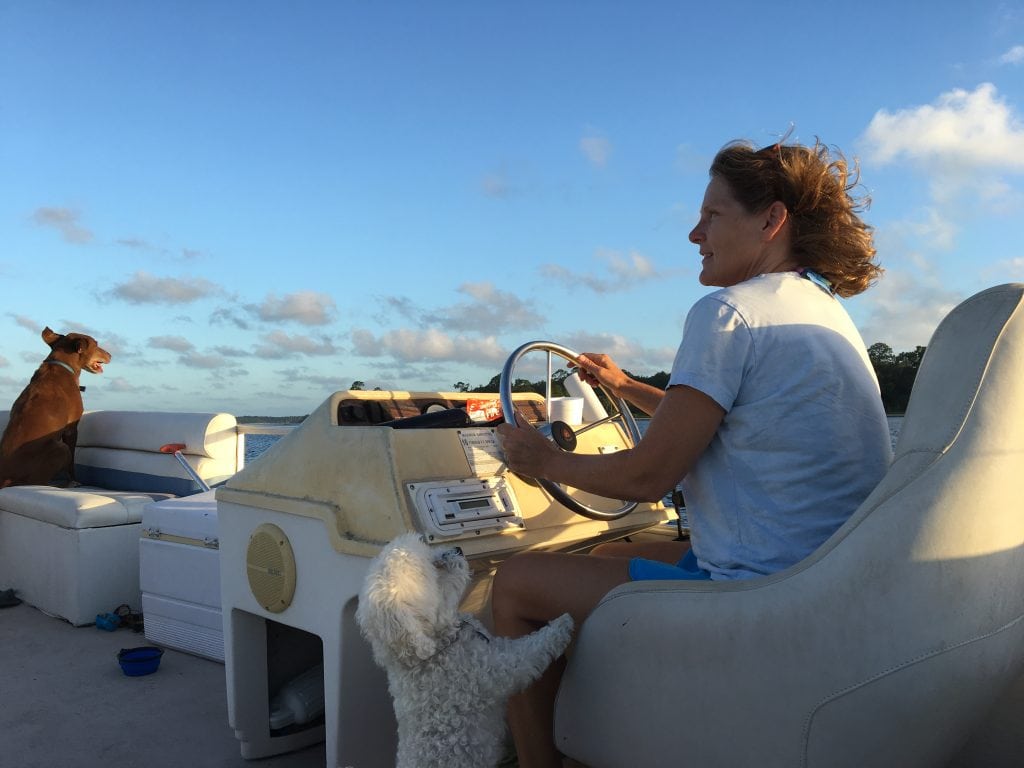 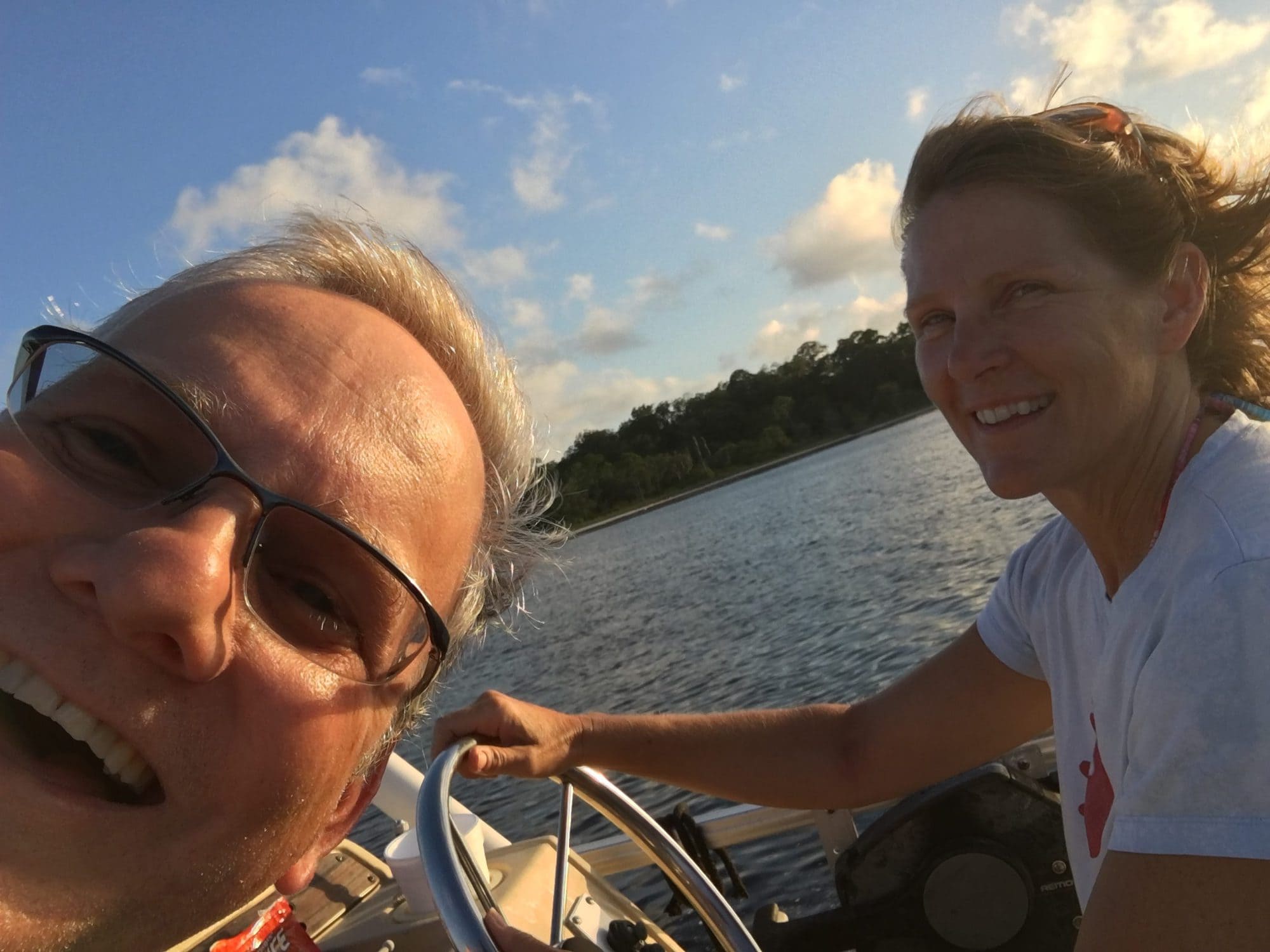 All good things must come to an end, so we left Kirby to fly off to Israel and we headed, which way? South of course! Well, East, then South. So don't touch that dial, we'll be back with another episode soon!