There's this major hurricane thing out there called Dorian, perhaps you've heard of it. I know you've heard of it if you live in the Caribbean, Bahamas, or Florida. It didn't start out life as a major hurricane. These Caribbean storms typically start out life as tropical depressions in the Cape Verde area off the west coast of Africa. They begin as a low pressure area, a disturbance, and if conditions are right (or wrong, depending on your point of view), the depression becomes a tropical storm and starts to circulate. If conditions continue to be right, the TS becomes a hurricane as Dorian did, and then a "major hurricane", which means Category 3 (111 mph winds) or higher.

That's what's heading to the Bahamas & Florida as I type, but that's not what we had in Vieques. To explain, let's go back a few days. The Dorian we knew was a tropical storm with no defined "eye". It was just a big blob of "weather", a really big blob. It was probably 500 miles across. Compare that to the whole island of Puerto Rico at about 100 miles long. And it was rotating, that was obvious in the satellite images. But you could never find an eye, the hollow center was never obvious.

So we had a big storm headed our way, except it was heading "south". It had gone through Barbados and St. Lucia as a TS, and was predicted to go south of Puerto Rico, then through the Mona Passage. That's a body of water between the west side of Puerto Rico & the east side of the Dominican Republic. It is a notoriously difficult sailing passage and many jokes were thrown around about how that storm doesn't know what it's in for. We had zero concern, because that's a long way from us (Vieques is on the east side of PR).

We went to bed Tuesday night safe in the knowledge that we didn't need to do anything special with the solar panels on the roof porch furniture, or anything else. The panels are tied to some concrete blocks but otherwise just sitting up there on the concrete roof. And just like last year, we were well stocked on hurricane supplies (food, water, booze, bug spray, etc.)

The next morning I got up early like I do and I was checking the National Hurricane Center website, like I do. The damn thing had turned north and Vieques was directly in its path! I woke Deb up right away, and kind of freaked her out, but in my defense I was a little freaked out myself. I said "we need to talk" and she thought the dog had died. WTH? But next thing you know we were up on the roof (at 7am) tying the thing down with more bricks and attaching to some rebar that sticks out of the concrete roof. It looked good. But as the morning went on, I kept thinking about it, and later on I went back up and did a better job. 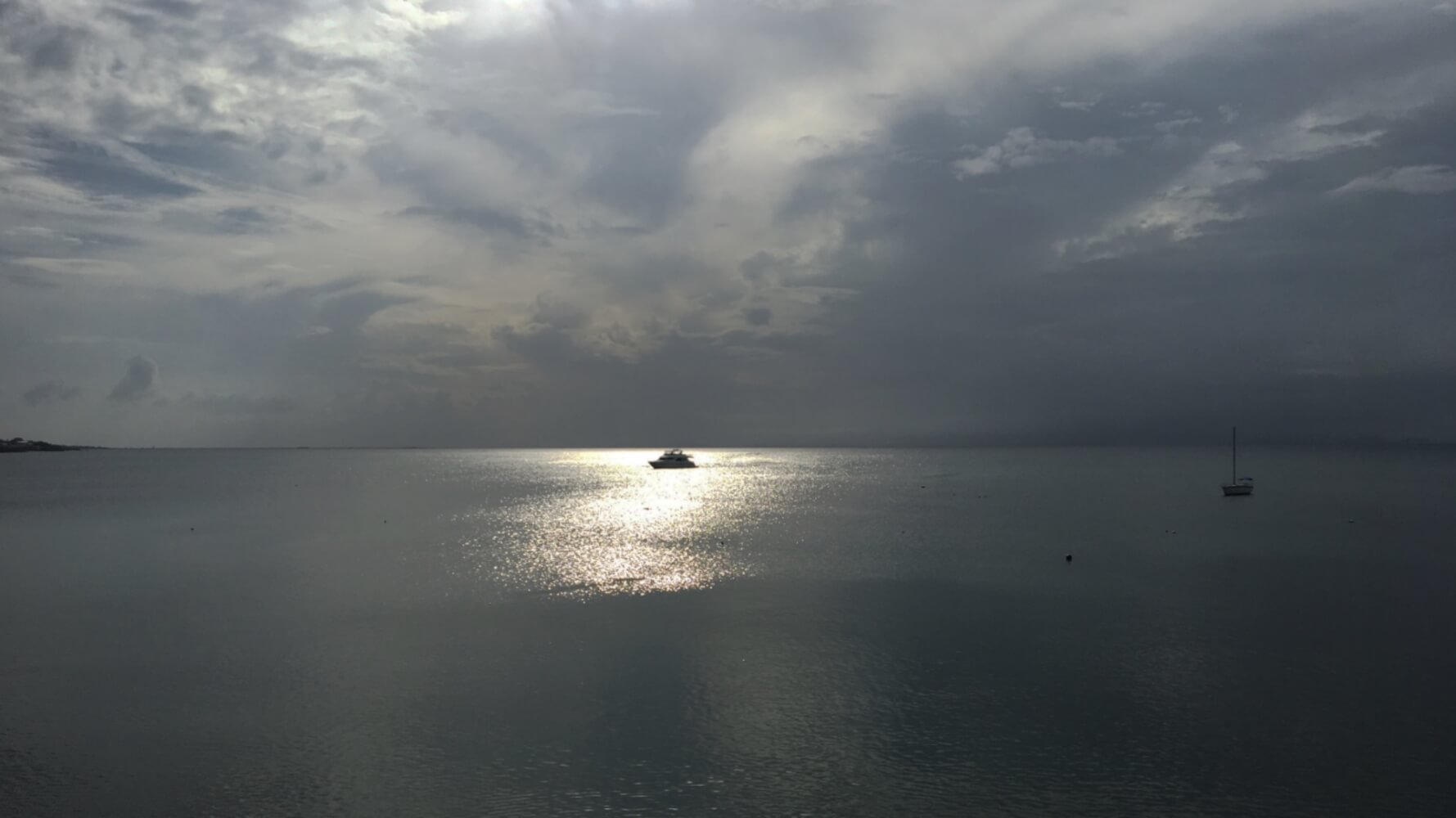 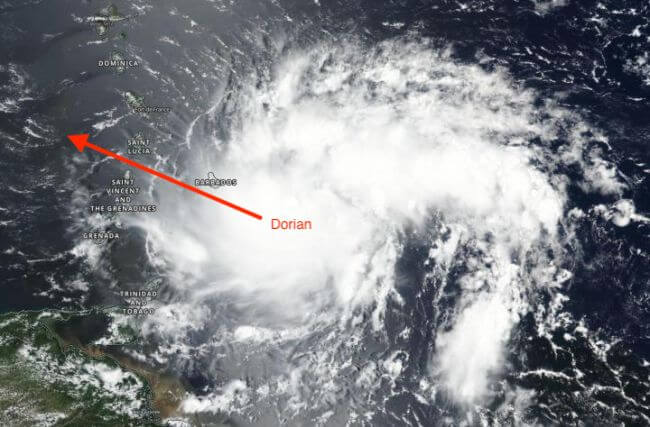 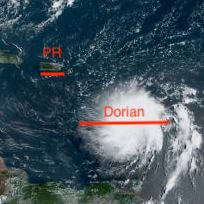 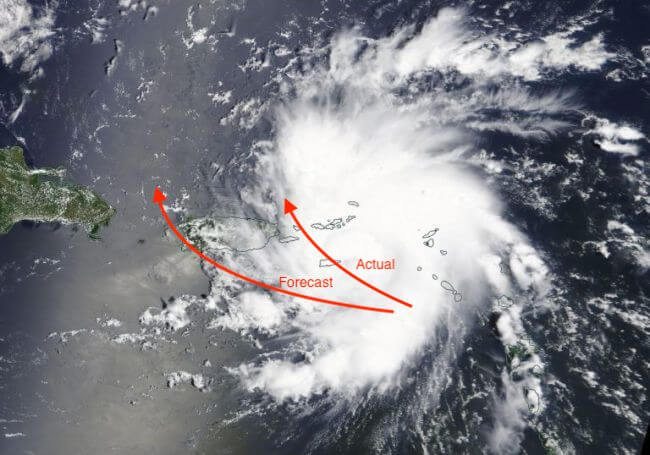 Someone described waiting for a hurricane as being stalked by a turtle, and that's so accurate! We waited and waited and waited. And then it was 10 a.m. The storm wasn't expected to arrive until 2-3 in the afternoon! So we waited. As the day wore on, the storm kept growing in strength from 50 mph, to 60, then 70, and kept leaning more north, putting it slightly east of Vieques.

When it finally passed by it was right at a Category 1 hurricane (74 mph) and was about 20 miles east of this island. That 20 miles made all the difference. While Culebra and St. Croix were in the direct path, we were just outside of it. Better, we were on the "rain" side of the storm instead of the "wind" side. St. Thomas and the other Virgin Islands were on the windy side, so they took some damage as well.

We literally sat on our back porch watching the rain, which wasn't what I would call strong, and in only a slight breeze. It was very strange, it was actually peaceful.

We saw bigger storms later that night after the hurricane left toward the Atlantic, the tails of outer bands giving us some big thunder boomers. The bottom line was that it was a big non-event in Vieques. Don't tell that to the people "up north" who are about to be hit hard, I'm just reporting what happened in Vieques. And you know, we kind of needed it to happen this way. This little island remains fragile in more ways than one. We toasted the happy result with a bit of Bilí, and said adíos to Dorian. 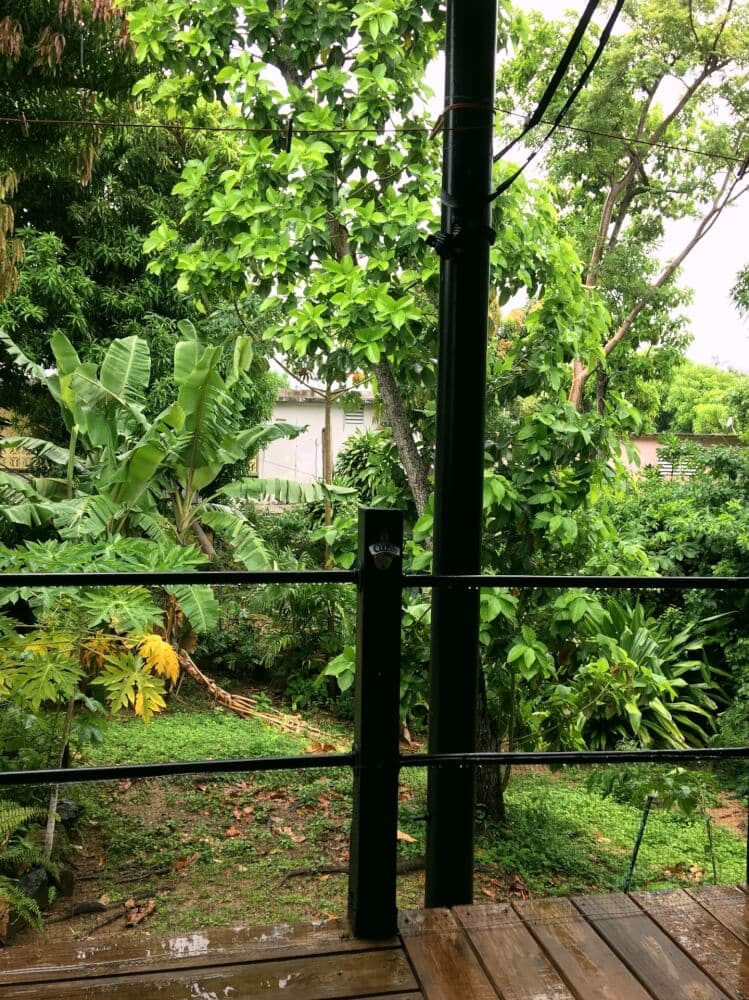 Our view of Dorian

TODAY'S SPECIAL: There's Something Sexy About the Rain, by Kenny Chesney, because when it's a calm rain, there is!