Life is a journey, not a destination. Some people think that's a cliché, but we don't. We talk about this idea constantly, that we should see more places, meet more people, and experience more cultures, cultures that are different from our own. Our travels so far have been wonderful learning experiences and we have grown so much through the people we've met. To continue to do this, we felt we needed to be in a different place, at a different launching point for our hops into the Caribbean, because you know, we still have Caribbean souls. So we made a decision.

Early this year we decided to leave when our lease expired at the end of August. We had an opportunity to stay through December, but we didn't want to try to move during the holidays. We subsequently remembered last year when we were trying to do a simple hop over to St. Maarten in September. The storms were spinning off the coast of Africa every few days, with uncertain paths, keeping us from making travel plans. Hurricane season is a real thing; we figured this year would be the same (and CSU is actually predicting a worse season this year) only we would be trying to move our entire household. So we said we'd go in the middle of August, and then it was early August. This is all hurricane season, but we were pushing it earlier to avoid the worst of it all. We had a big beach wedding to officiate on July 4 so we knew we'd be there until at least then.

But slowly we started to hear of this virus, and then everything escalated rapidly. On an island without a hospital the fear of getting a dangerous illness was deep-seated, and it still is. As Puerto Rico's governor issued executive orders to lock down the main island, things were worse on Vieques. Seeing little action, some residents started taking things into their own hands. They were monitoring AirBnBs, rental cars and the small airlines that serve the islands, and shaming them into shutting down. There was even an uproar over cruising boats anchoring in the bays and honestly it got a bit ugly at times because there was more fear than real information.

Eventually, the mayor of Vieques issued his own executive order to lock things down even tighter with nobody allowed in except bona fide residents. Homeowners who don't live full time on the island have to get special permission from the Mayor to come to their property. Vieques was already in a very strict lockdown, with only certain days to drive, and only specified destinations allowed (doctor, pharmacy, grocery, post office, bank). Police set up roadblocks during the day and asked drivers' destinations, even to the point of reviewing grocery receipts to check date and time. There was a total curfew from 7pm to 5am, and nobody was allowed to go anywhere on Sundays.

We did cheat one day during the lockdown. Our friend who is retired like us and only a few years older than I am, invited us to come over. We told him OK, but if we get stopped we're telling them we're taking food to an old person (it's one of the rare curfew exceptions). He begrudgingly accepted our proposal. I'm not sure what would have happened if the police had checked our cooler to find far more beer on the ice than the small bits of food we brought!

The real clincher in all this was that nobody was allowed to go to the beach! Can you imagine living on a Caribbean island and not being allowed on the beach? Let me say, that was a bitter pill to swallow, even with rum.

All told, the lockdown was more strict than anything we've heard of in the States, but it was effective at keeping things in check (at this writing, zero confirmed cases have been recorded in Vieques).

Beach, we miss you!

Now to rewind a little, we'd gone to the main island in early March for another Chinchorreo with our "Puerto Rican family" (they adopted us, yay!). That chinchorreo was grand, but I got sick 2 days later. So we self-quarantined from the beginning of March, except back then, it wasn't called "self-quarantine", it was called "staying home sick". In any case, by the time I felt better the real quarantine had begun. After a month of being inside, we were still fine, physically and mentally. But as the governor continued to add to the lockdown 2 and 3 weeks at a time, it started to wear on me a little (Deb was fine!). We began to wonder what we were doing sitting around the house, going grocery shopping once a week in a tight and stressful environment, and just waiting to leave. The wedding was seeming less and less likely to happen on time, and at that point there was no end in sight to the rolling restrictions in PR (things are easing up a bit now). It was around this time that our son's vacation to Vieques was cancelled due to the pandemic.

With plenty of time on our hands, we were discussing it daily. At some point, we decided that sitting around the house 3 weeks at a stretch until the quarantine was lifted really wasn't for us. We had places to go and people to see, and the lack of a hospital continued to be a factor. It became clear that it was time to leave.

United and American had no useful flights, so we booked a flight on JetBlue for May 12. The next day, they cancelled the flight and we had to start over. We found one on Spirit Airlines out of San Juan on May 8. So when all was said and done, "end of August" had become "early May". Life sped up on us and we had to keep up.

We needed to immediately tell our friends, but we were struggling to get together with the lockdown. When we finally did, we found it was really difficult without being able to hug people, and in some cases without even being able to see them face to face. They know who they are, and we hope they know we love them. It felt wrong not being able to say proper good-byes but that's life in these strange times. The saving grace is that we already have a trip planned back to Vieques so with luck and maybe a vaccine we can pay back all those hugs we didn't dish out.

We then had to get rid of the big Stuff. That was mostly our car, bikes, kayaks & paddleboard; all that went very quickly. By renting a furnished place, we didn't have furniture and appliances to deal with. Keeping light on our feet has given us a freedom we hadn't seen in decades. I gave away my beloved solar panels because it was such a specialty item and because my friend Ricardo knew how to put them to good use. After that, we still had consumables like beer, rum, and food to deal with. Unfortunately, because this thing snuck up on us so quickly, we'd just stocked up on everything. So we just gave it all away. Different people got different things, we spread the love out as it made sense to us.

The dogs didn't need health certificates on Spirit Airlines, but got them anyway in case we got rescheduled on another airline again. Then, we scrubbed and scrubbed the house, wanting to return it in the same or better shape than when we found it. We also prepared it for hurricane season by bringing in the outside furniture and closing everything down. We were proud of it when we left. 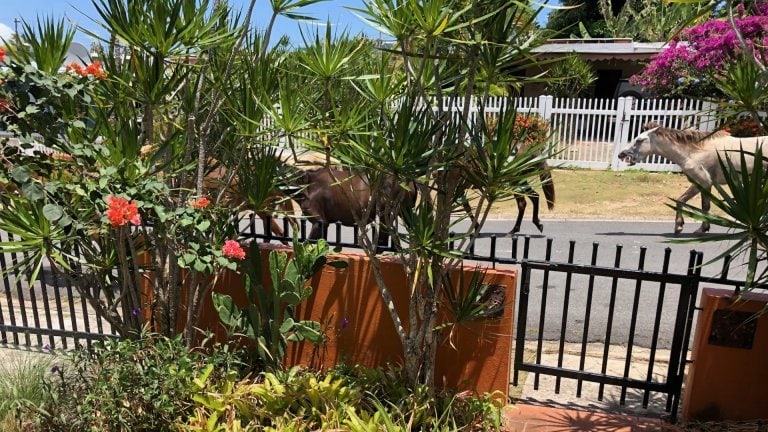 A team of roaming horses came by to say adiós! Bye bye horsies!

When the big day came, we drove over to the little island airport, put the keys under the mat for the new owner of the car (my friend Ricardo again!), put on double face masks, and climbed into the packed little plane with our dogs in tow. We were surprised it was full because when we booked it, the agent said we'd probably be the only ones on the flight. Deb said she hoped they'd have a pilot because as many times as we've seen them do their thing, we haven't exactly gained those flying skills!

The dogs were in their kennel bags, and were placed in the rear with the luggage. It seems Maxwell didn't like his assigned seat though, because that noisy boy was having none of it. He barked constantly all across the water. We tried to apologize to our fellow passengers (sorry Robin - from Robin's Bar!) because he was quite loud. We found out why it was a full flight - they'd rescheduled the plane to make a quick stop at the small airport in Ceiba (only 20 minutes away) before continuing to San Juan. It was fortunate though because everybody got out except us and when they re-packed the pups in the cargo area he was much quieter. Another 15 minutes or so and we were in San Juan, at the little airport, not the international one. 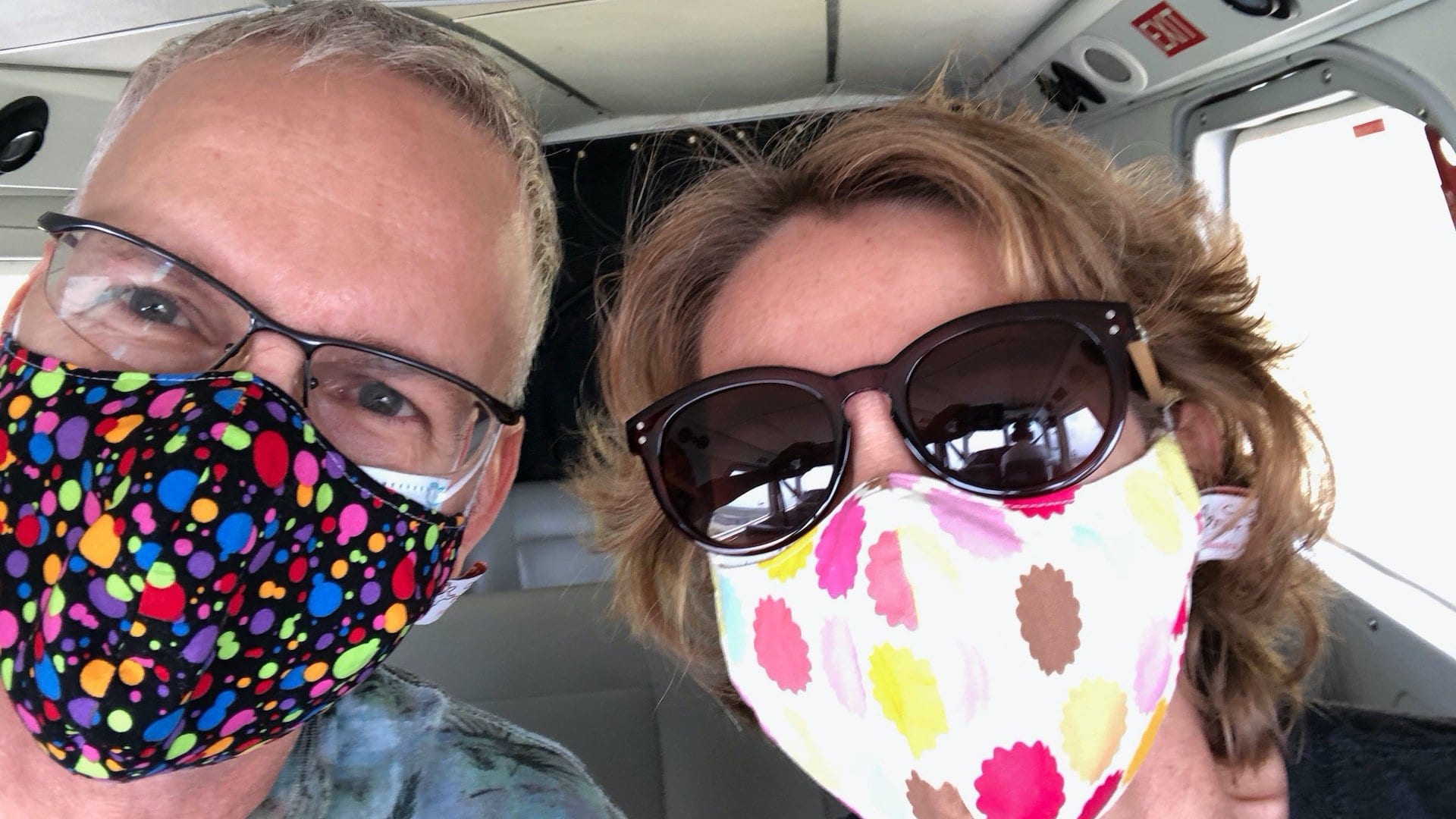 A short taxi ride later and we shuffled into SJU, hauling our heavy bags and the doggies. Deb even strained her ribs at one point trying to get her bag on the USDA scanner's conveyor belt. It was pretty exhausting, so we went straight to the Spirit check-in to dump the heavy stuff. Nope, they told us, they wouldn't take our bags until less than 2 hours before the flight. Argghh! We'd arrived hours early because that's just how the small and big flights worked out.

So we found a little seating area and settled in to catch our collective breath, only to be kicked out a few minutes later because we were sitting in an unmarked handicap area. Sigh.

We dragged our bags away, dismayed to be so tired when the trip was only beginning. But we counted ourselves lucky when we found a spot next to the windows to wait it out. It was a nice sunny seat and away from all of the infected fellow humans running around (we had to assume!). 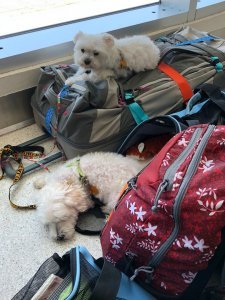 A couple of hours later, we were able to dump our heavy bags and work our way through security, then out to our gate where there were lots of infected humans running around (we assumed!). 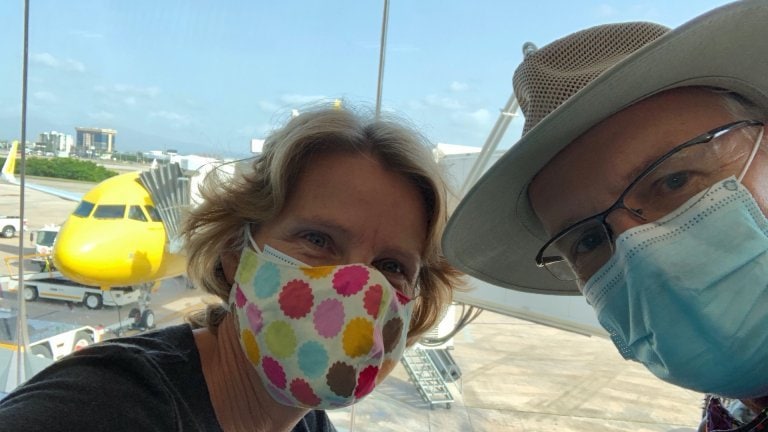 The airport was almost dead, with all of the restaurants and most of the shops closed. I was looking forward to lunch at Margaritaville, or at least a sandwich somewhere inside the airport, but alas it was not to be. Instead, we got some snacks and drinks and settled in for another couple of hours.

When our flight was finally called, we double masked-up, grabbed our small backpacks and a dog each, and boarded the plane. 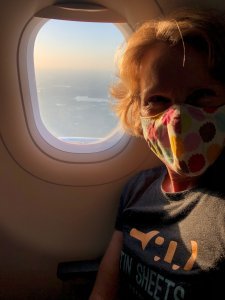