We were sitting in Colorado watching the news online as Tropical Storm Isaías went through Vieques and mainland Puerto Rico. We were thankful our friends in Vieques got little more than some much needed rain, but mainland PR had some serious flooding from this storm (whose name is hard to pronounce, but is the Spanish version of Isaiah). Then alluvasudden the realization hit, as the storm left PR, it was now headed to the exact same place we were headed! Our plan all along was to get there on August 1, the start date of our rental. 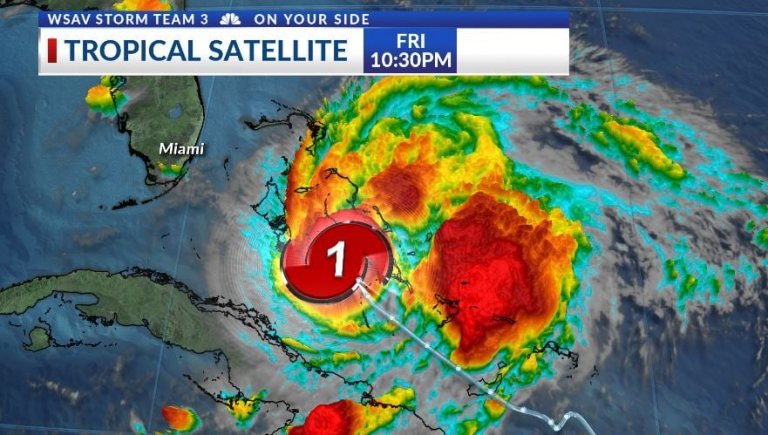 We had been preparing and packing the car for days and that included a roof bag (https://www.roofbag.com) which worked out extremely well. Our stuff arrived high and dry, which was a bit surprising when you consider the enormous amount of rain we encountered on the way. Packing also included a bike rack on our newly added hitch in the back (which held our golf carts as described in Oops!). Now with this new realization, we moved our plans up a day to see if we could get in our new place before the storm hit. It wasn't until we were on the road a couple of days that we (figuratively) stopped to think about this whole plan.

We could get there just in time, just before the storm. And because this was a TS, and only maybe turning into a Cat 1 hurricane, we'd likely be safe in our new little place and likely we'd be high and dry as well. I use the word "likely" because the new place is 100 yards from the sand and with storm surge and tides, you just never know. But we were OK with that risk. What we were not OK with was putting our new car (not new, but new to us) next to a big coconut palm tree and hoping it didn't blow over on it (we knew we had no garage). We tend to self-insure on cars and other things like that, but with the savings on insurance cost comes a little additional caution.

We realized we were on "full throttle, hurry up and wait"! Can we get there in time? Yes, we can. Should we get there in time? No, no, we should not. We definitely should not. So we added a stop, and then another stop. On the final day, as we waited for the storm to pass, we stopped in Gainesville, Florida, home of my alma mater, the University of Florida. (Here's a factoid I bet you didn't know: "alma mater" from Latin means "nourishing mother". You're welcome!) It was a quick stop but a great one, as we toured "The Swamp", the best football facility in the world (in my always humble opinion). Then we hit Orlando to pick up the last of our things at my brother's house and headed straight at Isaías to the east. It actually stayed offshore enough that we had little more than some gusty high winds on the bridge overpasses. There was very little rain, no flooding, none of that badness that hit the Carolinas a couple days later.

Now at that point, we literally had everything we owned, ALL of our STUFF, in (and on) a Honda CR-V, and the car wasn't even full. We'd never really done this before, even when we were touting selling all of our STUFF. That's because we'd still left a few things behind in Colorado, at Deb's Dad's house and at our son's house. But this time we had it all, and in a car that was smaller than the one we had when we started this adventure. It helped that we added a hitch to put stuff on the back and a roof rack to put stuff up there, but we did it! Between the start of retirement we've accumulated some big stuff (kayaks, paddleboards, bikes, etc.) and then later had to sell them off, but that's the consequence of the lifestyle. We own our stuff, it doesn't own us! 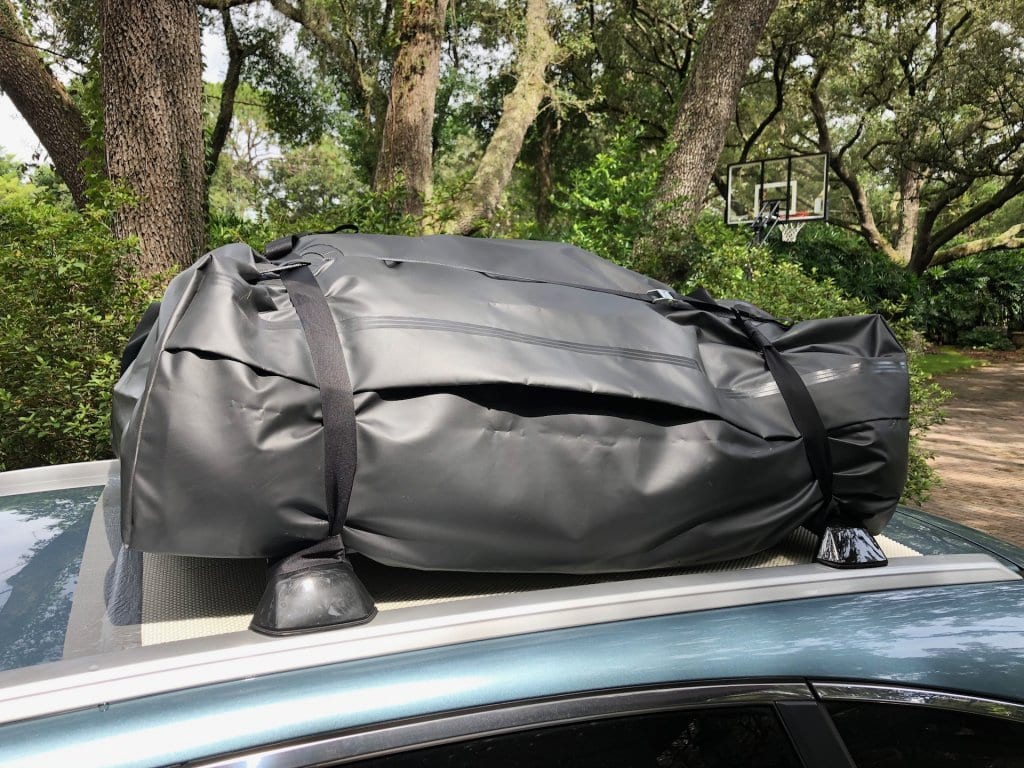 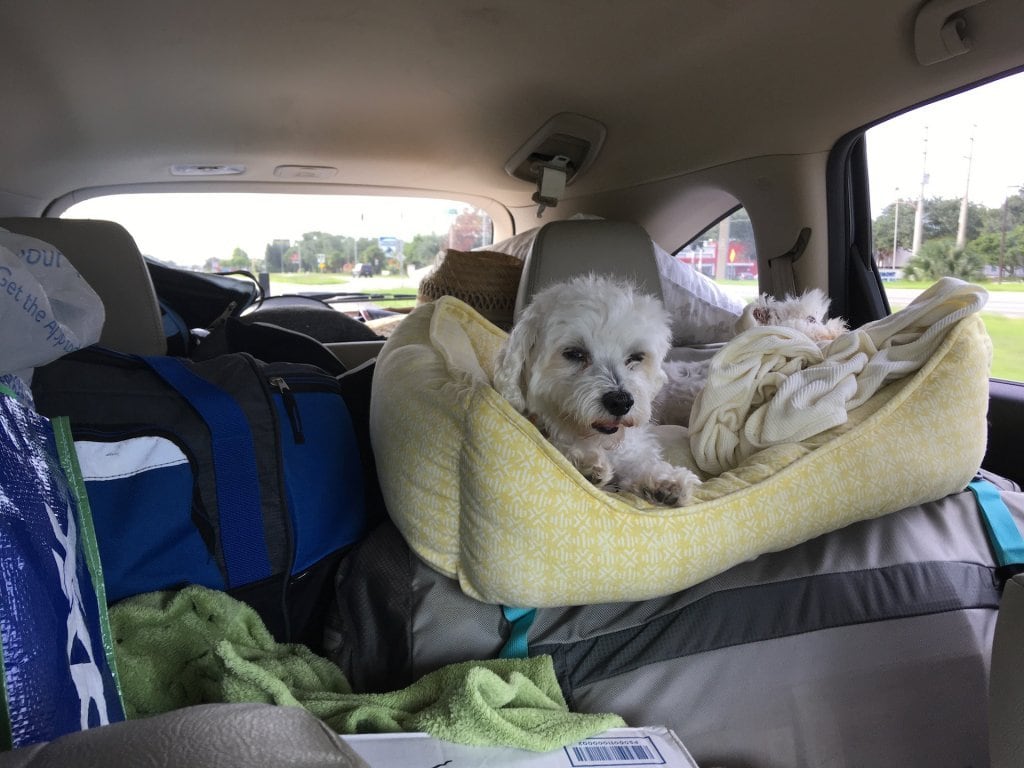 We got plenty of room up in here 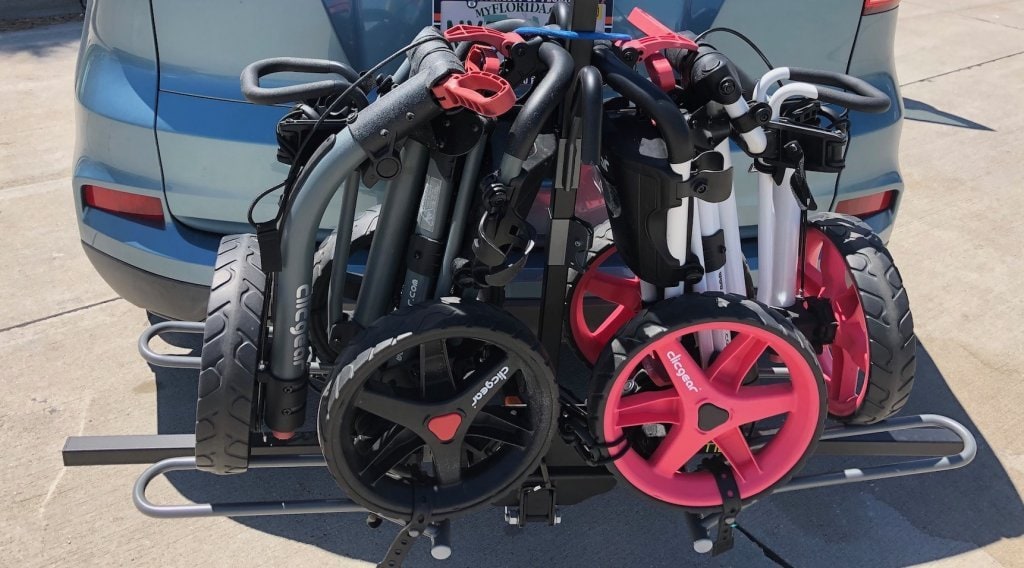 So here we are now, 100 yards from the sand on the Atlantic Ocean in a simple but cozy AirBnB house, that is surprisingly large by our standards. It's also cute inside with pretty much all the modern conveniences.

We just have to cross the iconic highway A1A (Jimmy Buffet named an album after it) and the beach is right there. This is the area I grew up in, a barrier island on the east coast of Florida. Melbourne Beach is right next door to where I grew up in Indialantic, but where we are staying is a little farther south outside of the town limits. There's one long, skinny road, one supermarket, a couple of gas stations, etc. There's water to the east and water to the west, providing great sunrises and sunsets. 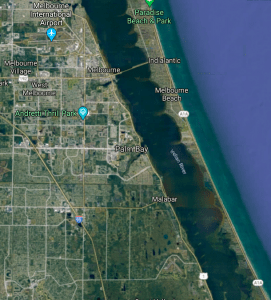 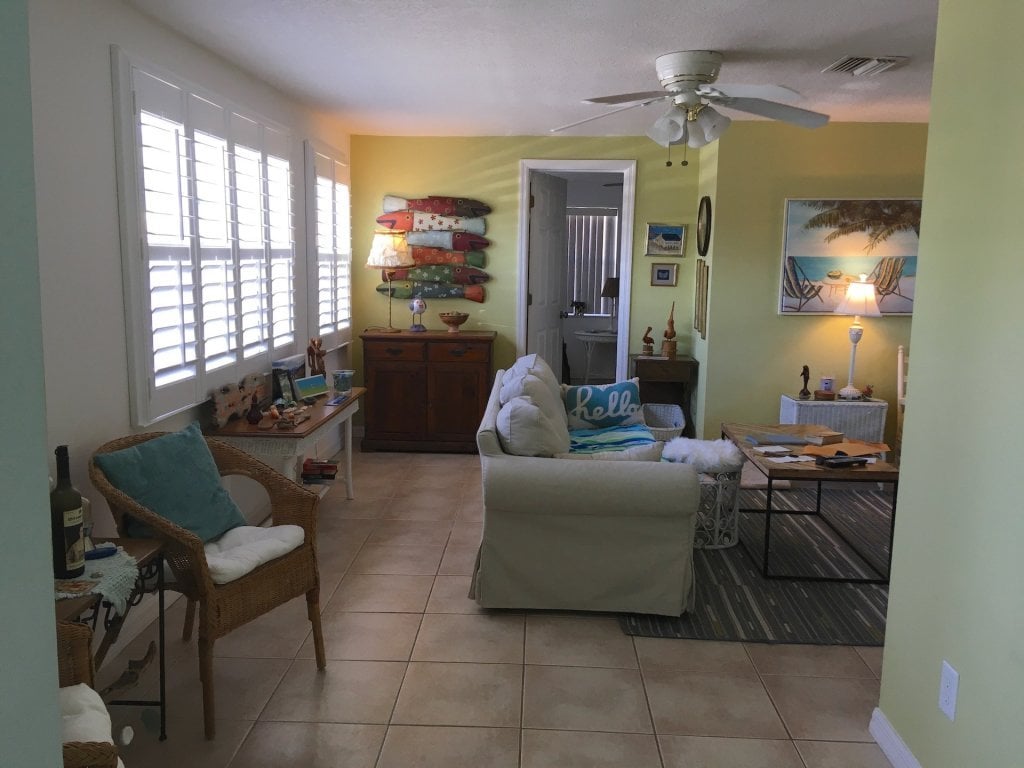 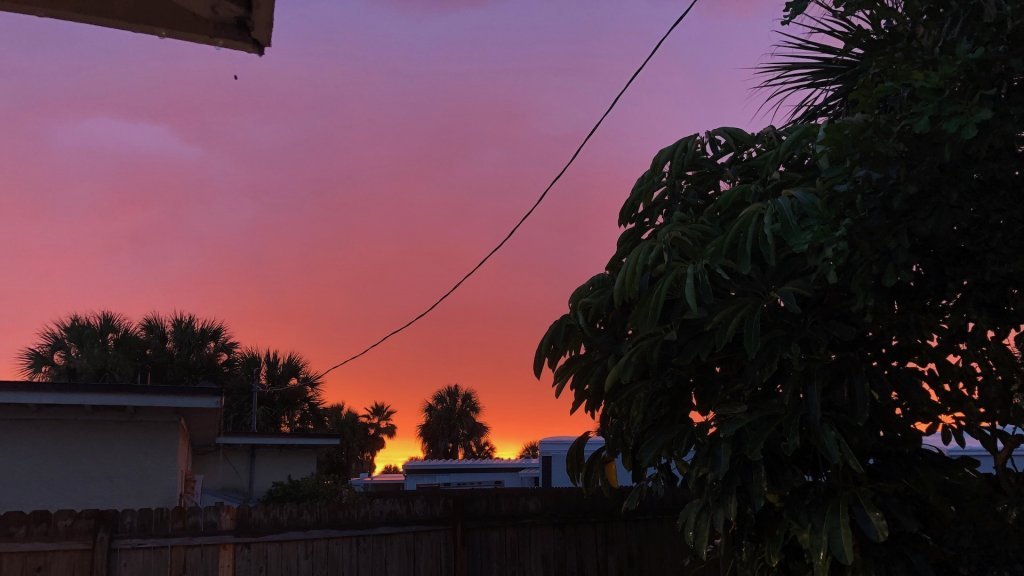 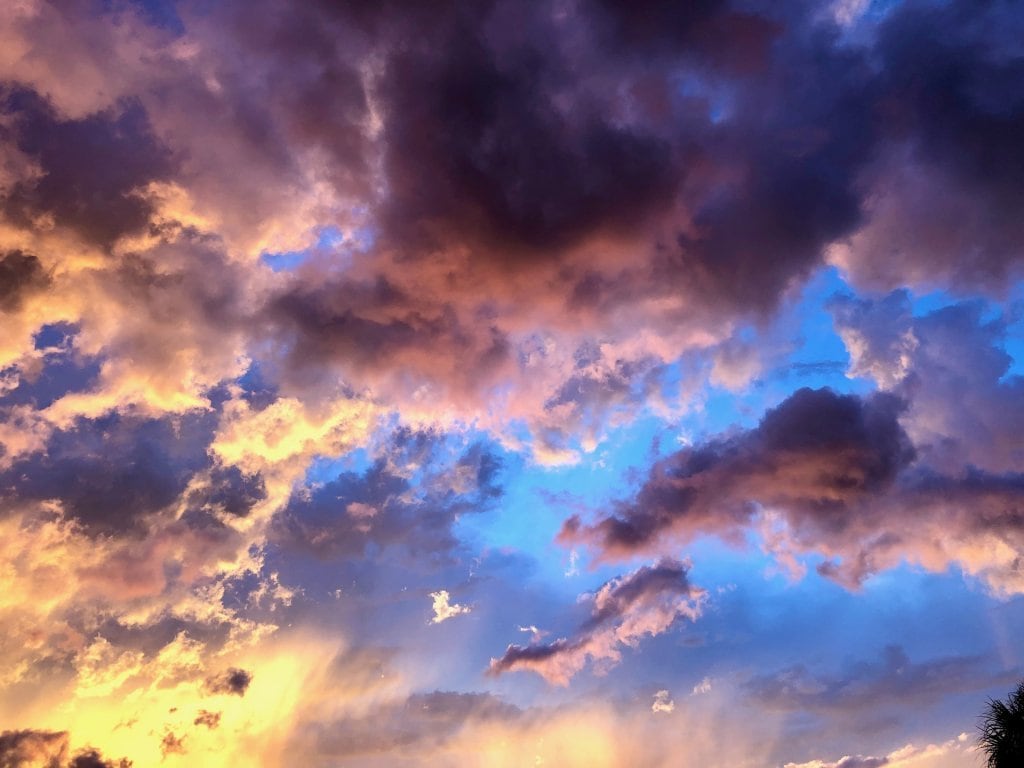 We still don't have what you might call a plan except to see what kind of trouble we can get into. We quickly bought some bikes, to prove we weren't lying to the bike shop assistant when we bought our bike rack! We also plan to buy some paddleboards to get our workouts on the water. A few weeks ago, a good friend (thanks David!) offered to let us ride his boards in the cold lakes of Colorado. We semi-politely declined because we were too busy, much too busy, and definitely not because that lake water was only a short time ago sitting up on the mountain tops in the form of snow. It's above 32F, but not by much; we'll try out the warm waters of Florida instead.

Our "plan" also continues to be to live life (truly live life!) without getting the dreaded virus. To that end, we are careful. I'm sure many of you think we aren't careful but we are. We survived the hell flight on Spirit Airlines after all. As Deb says, we've been training our whole lives for this! Before it was cool, we would do things like "wash the world off our hands" when we got home from the store. We would wipe down grocery carts with alcohol wipes, and we would wipe the heck out of our airline seats as soon as we sat down. Back then, this dropped our incidence of colds and flus dramatically, so it was worth it to us. Now, everyone does it, proving once again what trend-setters we are. In regards to Covid-19, as Steven Wright once said, "I intend to live forever. So far, so good." 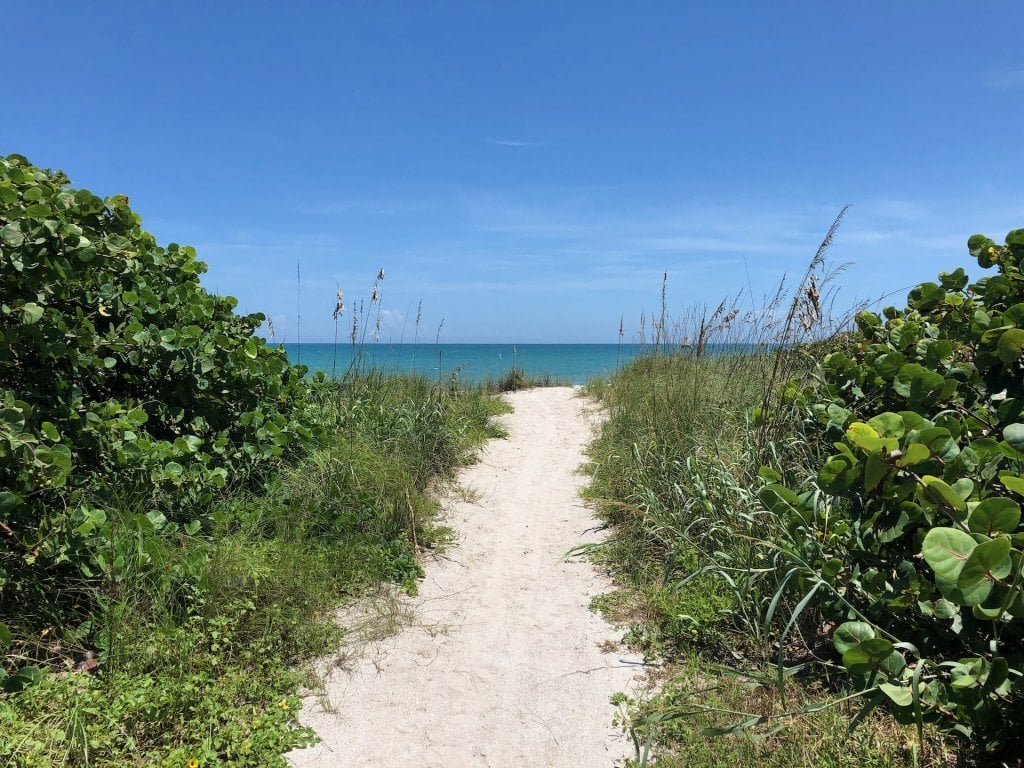 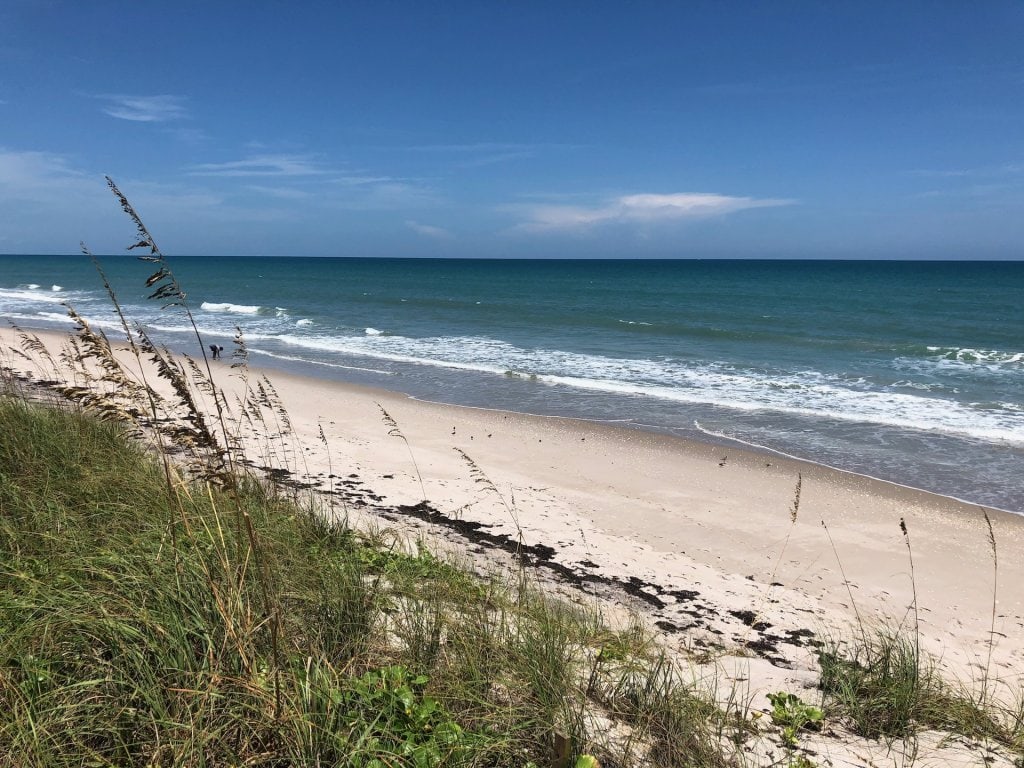 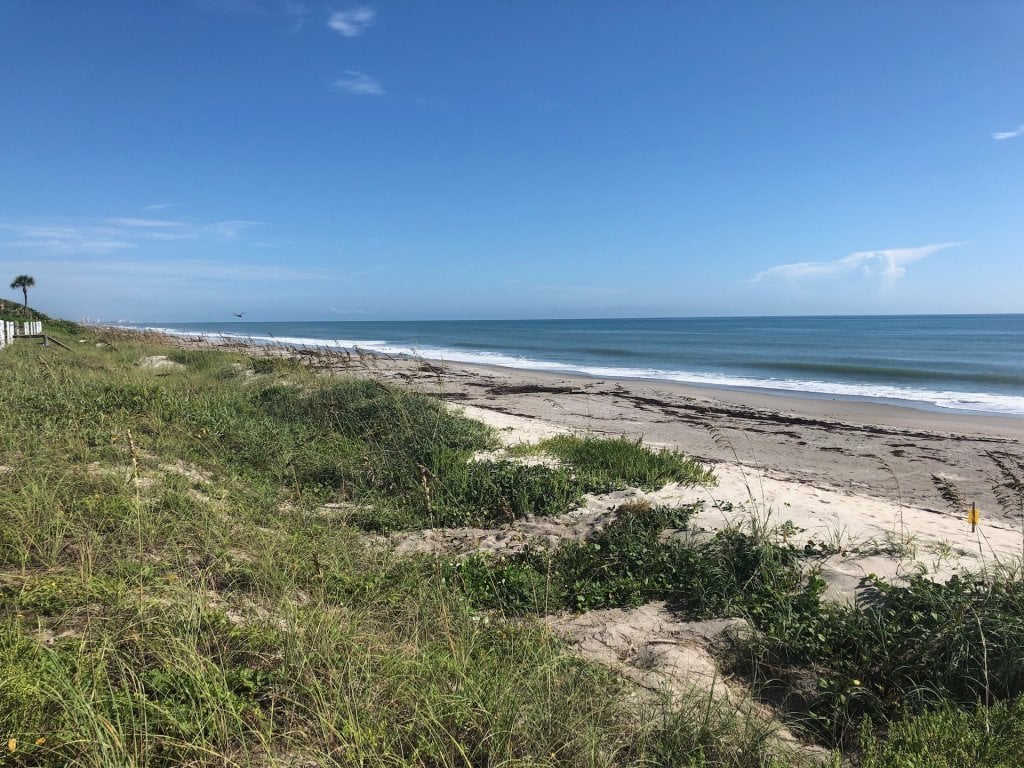 So, I guess that's a plan, "Don't die", but everyone has that plan, do they not? We do have beaches in the plan though! Miles and miles of beaches. We also have the Indian River Lagoon, only 700 yards to the west, which is said to be good for paddleboarding with dolphins and manatees.

We feel this is a great place to hunker down, even in Florida where the virus numbers are currently high. Those cases are primarily in the big cities (Miami, Ft. Lauderdale, Orlando, Tampa, etc.) and we're in a small town. It's easy to maintain distance from people on bikes and on the uncrowded beaches where we can walk, fish, swim, and paddleboard with no worries. We also enjoy our nighttime walks on the beach with turtles laying eggs and the little ones hatching.

We still plan to nurture our Caribbean souls, but that needs to wait a while (see above re: "Don't die"). But long-term, this is why we came to this area - it's actually cheaper to travel to the Caribbean from Florida than it is from say, Vieques, PR. Because the ferries are unreliable there (that's being kind), you have to fly from the small island to San Juan to get to other destinations. That adds a couple hundred dollars per person, round-trip, while round-trip flights from Florida to SJU are half that. Although many Caribbean flights travel through San Juan, many others don't, so travel from Florida can be simpler as well. This was part of our early planning, to use Florida as a jumping off point to other destinations, so we'll get a better feel for that as we go. 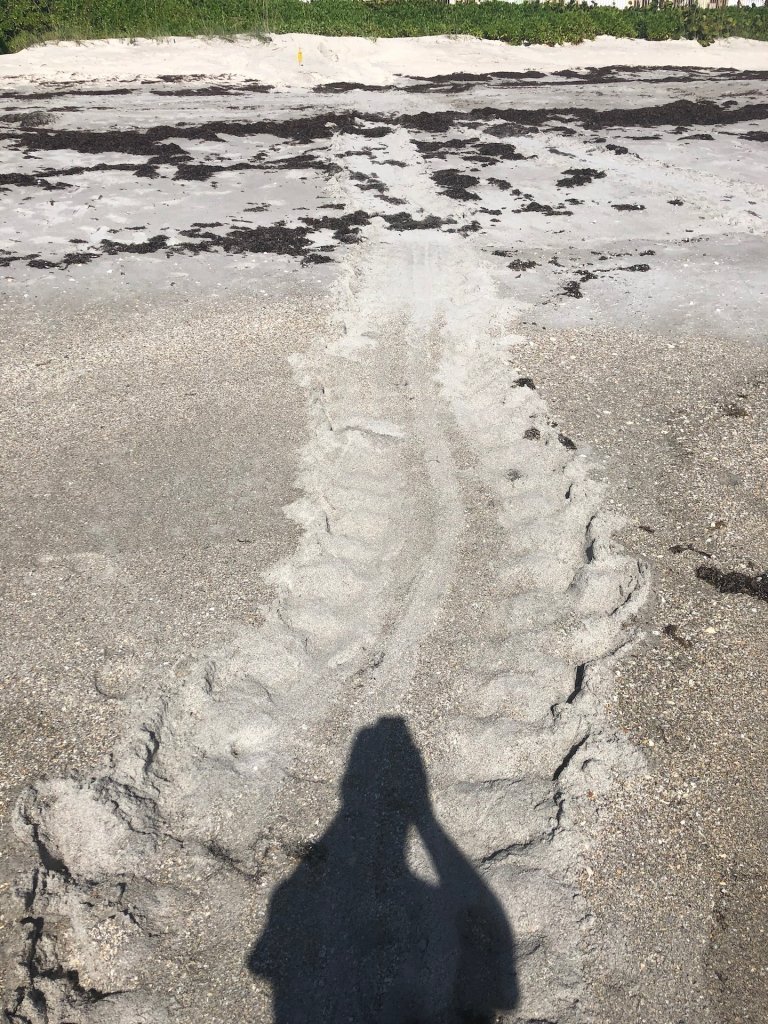 Because of the virus and the Puerto Rico lockdowns (plus other factors), we hurried up to get to the States. And because of the tropical storm / hurricane, we hurried to get to Florida. But then we decided to wait. It's not the first time a hurricane affected our "plans", and in fact, we have a strong sense of deja vu right now, because of the storm and because of the 2000 mile driving trip that we've also done before. So we hurried and waited, and now we get to wait some more in this cool (actually hot) place. You could say, and we do, that we're knee deep in it. It's good though!

TODAY'S SPECIAL: "You and Islands" by a perennial favorite, the Zac Brown Band. "Let's get back to you and islands. Bahama breeze blowing through your hair." Sounds great to us, but we have to be patient!