We wanted to write up this subject before we forgot how unique some of these things are. After a month or two, we have come to just accept this stuff as normal. 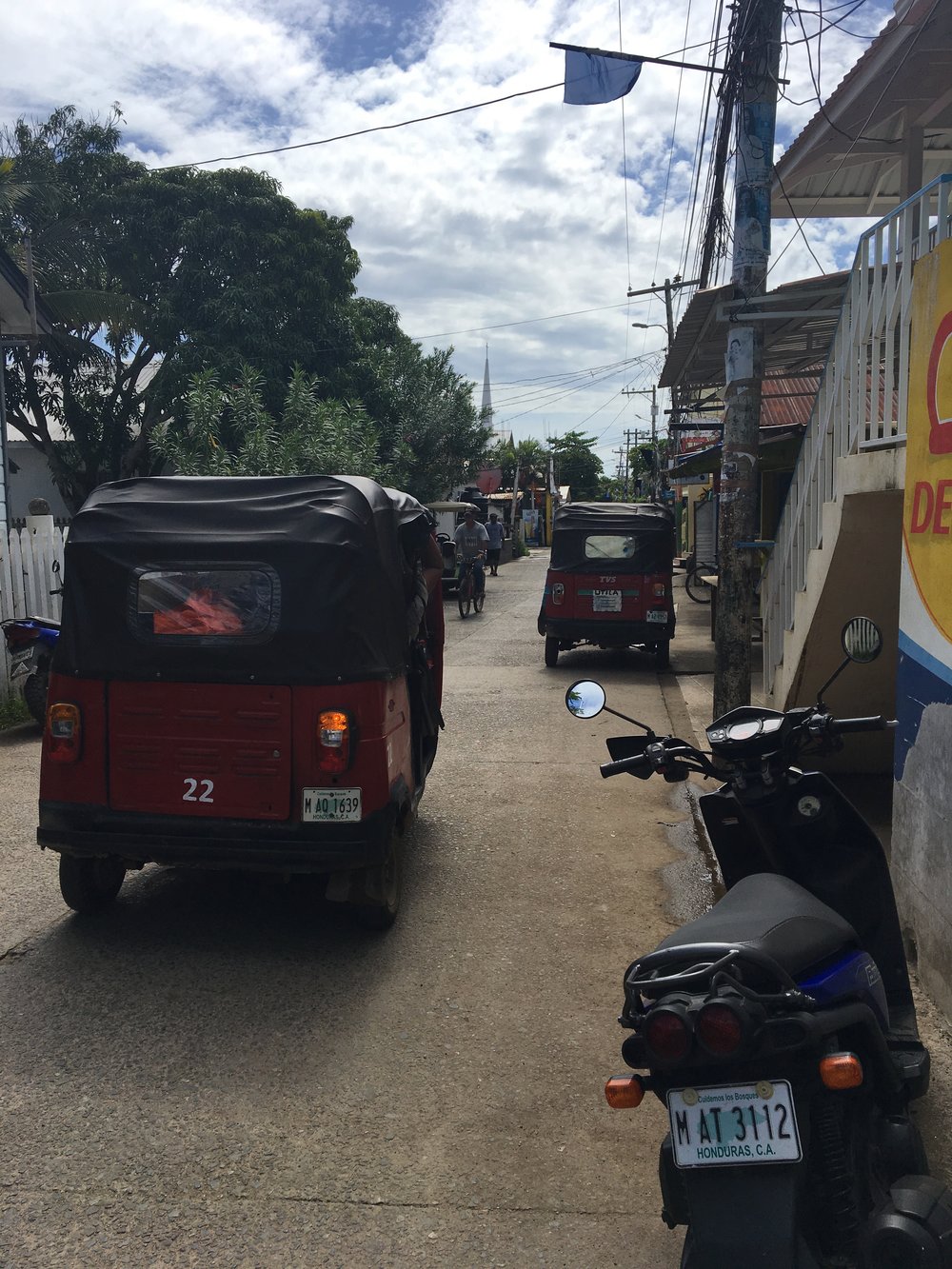 We’ve talked about the meaning of the horn sounds on the tuk-tuks. We don’t even think about them any more, they’re just like lane lines or traffic lights to us (of which, neither exist here). And addresses, there are none. Our street is called Cola de Mico (Mico’s Tail) but it’s not even on the map. I’m not sure who Mico is, or why he has a tail, but the road is called Lozano Road on the map. And we have no house number. It’s “Pride and Luzia’s place” – that’s what you tell people, including taxi drivers. If they don’t know them, you say it’s uphill from the Mango Inn. That’s it, and that’s normal here.

If you just knew where stuff was, life would be easier Norm!

A great deal of business on the island is done over a FB group called Utila Buy and Sell. We have bought roasted chickens, beer, boat rides, and gallons and gallons of fresh squeezed OJ that way. “I’ll take a chicken, where can I pick it up?” See the image for how that went. You just figure it out, that’s what you do. Of course, it’s dead simple for locals and we are getting much better as we get familiar with all the local landmarks.

Fortunately, the orange juice like many heavy items (beer, dog food, etc.) gets delivered to our door. Again, we tell them “we are at Pride & Luzia’s place”; they come in a three wheel truck and holler “Hola!”. We holler “Hola!”, and run down and pay them and take our OJ (I just did this while writing the blog). It’s expensive compared to what we would pay in the States because it comes from the mainland and it’s fresh, but it’s also some of the best OJ I’ve ever tasted. It’s made up for in the low cost of beer, which is also delivered by the case. Coffee is also incredibly cheap, and it’s good. We are drinking a dark roast Honduran coffee that runs us 5c a cup when brewed at home. It would normally be closer to 9c a cup but we bought the expired bag (we actually bought 2!) so that was a lot cheaper, LOL!

Half acre cleared with a machete

The other night we thought we were hearing gun shots and were a little bit nervous. But we went to bed and all was fine until 12:30am when we heard it again (Deb heard it, I was sleeping). We asked our landlord in the morning and he had to think hard before he remembered it was just his crazy neighbor slapping the side of his machete against the rock wall next door. I guess he does that to get his sister’s attention and more importantly, her share of the rent. Apparently, he just slaps his machete around at night and it’s nothing to worry about. A semi-crazy guy with a machete is nothing to worry about? But seriously, people carry machetes around here all the time. It’s how you cut the grass, the weeds, the bananas and plantains, how you open coconuts, pretty much how you do anything, and also how you get money from your sister! 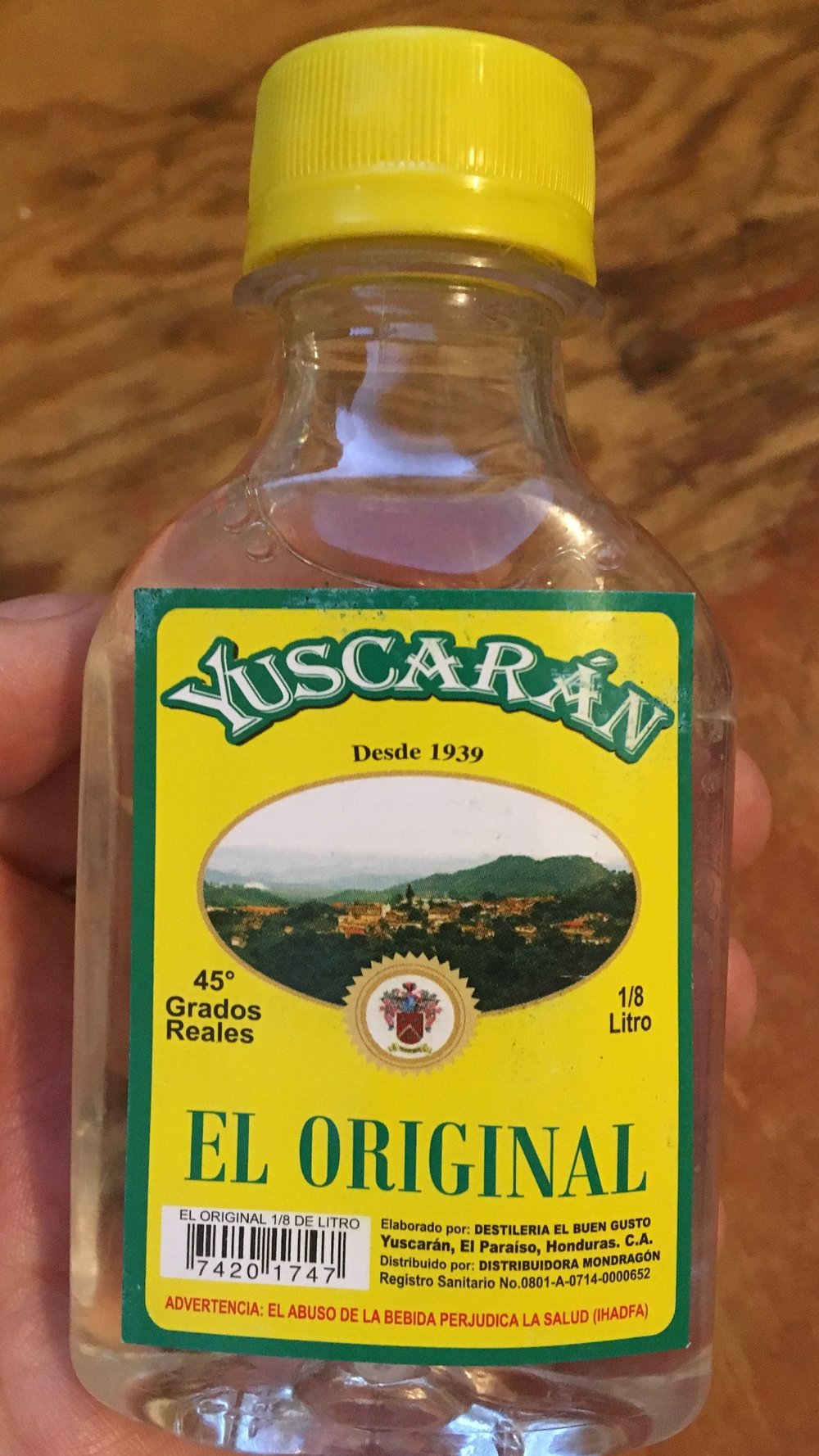 Need to stock up on the good stuff! 🙂

Now elections are coming up! That means people drive 4-wheelers all around town with very large speakers blasting music, or urging people to get out and vote for either the red and white party or the blue party (based on the sheer volume, it sounds like red and white is winning). There is no early voting or mail-in; it is happening next week on Sunday. And of course that means that the sale of alcohol is suspended next Saturday and Sunday, which also means the bars will be closed. I guess they want their citizens to be sober and not hung-over when they vote.

This also means that this week the run on booze is starting. It’s like a run on the bank except with booze. We recently met Mamita, a half-Jamaican woman in her golden years who retired here from the States. She told us that we should get out and get our booze because “all the good stuff will be gone and you don’t know what the Tuesday ferry will bring, or if they will bring anything”. She’s got a point, if bad weather comes you won’t get anything because the ferry won’t come! And none of us want to settle for the leftovers. So we need to get a case or two of beer delivered to get us through the weekend! 🙂

Rehab! Hangover! Doesn’t matter what you call him, he won’t come anyway.

We talked to Mamita for a long time and she asked if we knew about the cat at Relapse (the bar next to the public beach). Yes, we know that cat, he’s the orange one who sometimes goes by Rehab and sometimes by Hangover. She said her cat looks just like him so she went down to the bar to get some child support. Turns out he’s not the father!

I haven’t had my hair cut since March, but Deb decided it was time for her. So she got it done, the first time for her speaking only Spanish. Deb told her “Yo se mucha palabras, pero no entiendo mucha.”, which basically means “I know a lot of words, but I don’t understand a lot.”  She was able to tell the lady how much she wanted cut off, and the style. They chit-chatted about their kids, how long we’ve been here, etc. in basic Spanish. Deb must have done a good job with the language because it looks great!

As you know, we showed up here at the start of rainy season. The first two weeks weren’t rainy, they felt like the hottest summer I can remember, and with AC only in the bedroom, I almost had a second thought about moving here. Then I remembered sliding sideways down the US Highway every Colorado winter on my way to work, so a little or a lot of sweat is pretty tolerable. But the season did come in, starting with those incredibly powerful nighttime thunderstorms that sound like God is mad at someone, and took out the Internet on our part of the island for days (now, they unplug the Internet when there is lightning!). You can go down and give them a piece of your mind about this, but you can’t give them your whole mind. If you do, you’ll get nothing and you better learn to like it. Example: the mayor, yes, The Mayor!, is living off his own generator because he pissed off somebody at the electric company. Apparently, island politics isn’t all about glad-handing and voting. 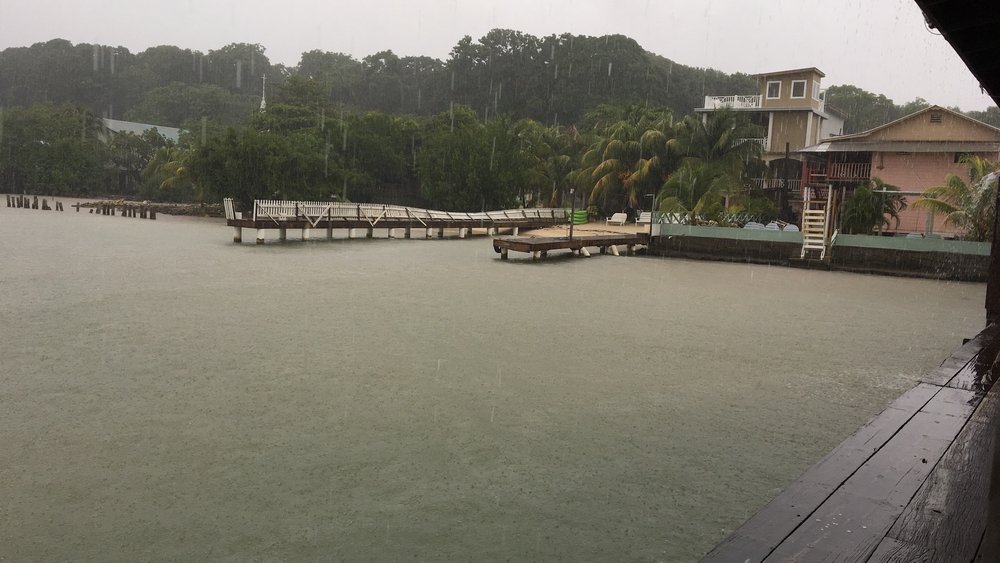 Sittin’ on the dock of the bay…

Those booming thunderstorms seemed to have mostly gone away now, but the rain has increased as the temperatures drop. And when it rains, it really rains! It’s so loud coming down on our tin roof that you almost can’t carry on a conversation in the house, and don’t even bother with a phone call! Temperature-wise, it’s been fantastically pleasant here in the last month, with highs in the low 80s, lows in the low 70s. Even though it rains almost every day, the rain isn’t constant. Even on the worst days we always manage to go out and do our shopping, or go to a waterfront restaurant/bar and watch it rain on the bay. Our luck has been superb too, the sky seems to open up every time we walk in the front door. Except one day we took the doggies to the beach – we were having a great time. But the rain chased us off the beach and we walked home in a warm, gentle shower – it was actually very pleasant. It was a welcome difference from the cold summer rains in Colorado. And the dogs didn’t seem to mind either.

We’ve even managed to get out between storms every week so far on Tuesday afternoons, for housekeeping (it comes with the rent). Laundry is another quirk of island living, at least on this island and to our minds. The economics here make it difficult for most people to afford a washing machine, and they certainly can’t afford a dryer (although there is a shocking number of iPhones etc. in everyone’s hands, including kids). So the majority of people (locals & tourists) have someone else do their laundry (ours is done by our landlords). Some of the laundry is certainly washed by hand on a pila (link here) (hat tip to my Honduran amigo Oscar for this tidbit early on in our stay) but as time goes on more and more is done in a modern washing machine, as is ours. Drying is almost always done on a line under cover out of the rain, but if it’s really rainy (meaning super saturated wet air) you just have to wait to do laundry. Otherwise, you ending having to wash them again as they’ll get smelling like mildew.

Have I mentioned that this island has more than it’s share of one-handed men? With such a small population, we’ve been surprised to see two different guys right here in town, and we see them two or three times a week, that only have one hand. The other one has been removed at the wrist. I asked around and you can guess, these guys didn’t end up this way from being a good person. Sadly, one of them is a junkie and a beggar (probably before and still), but the other guy has a respectable job delivering things on his three-wheel bicycle cart.

As you can tell, there are lots of different people here, and not just because Honduras is a new country for us. Islands tend to attract individualists, unique personalities that don’t fit in to the daily grind of any country. Unique retirees from the US, Canada, Europe, artists, small business-people, entrepreneurs in their own right. Mamita is a barrel of laughs. There’s the owner of the restaurant in our neighborhood who lived for years in Boulder, CO working in the restaurants. The young lady who opened the Crepe shop is from Brittany, France, where crepes were invented. There’s a German pensioner who rules the roost when he’s on island. And there are several young Canadiens here that tend bar, run a tattoo parlor, just whatever it takes to live in paradise. Fruitcakes, one and all, and we are proud members of the club! The people we’ve met have definitely been the highlight of this stay so far!

Update: Remember when I predicted that the Texas Mule bar wouldn’t last?  Yep, it’s sold, along with all the stuff in it. It’s a nice building and location, and I love Texas, but this idea of a Texas themed bar in a Caribbean island was terrible.

Once again, the post has run long. With apologies to Mssr. Pascal, “I didn’t have time to write a short post so I wrote a long one”.

TODAY’S SPECIAL: Fruitcakes, by Jimmy Buffet – this island has it’s share, including us!

Use the comment section below and tell us about unique experiences in your travels – we want to hear those!

FYI, none of these posts are from Norm’s fruitcake brain alone. Even though I do the writing, Deb is a major contributor to the ideas and fun we talk about. This post was even more heavily influenced than usual (and half written) by Deb, who notices things in her own unique way! 🙂