How long will I live? How long will you live? How long will any of us live? Of course we don't know, none of us do! But retirement planning requires us to make a guess, unless we just have so much money it doesn't matter (This is not the case for Deb and I!) But guessing is very uncertain, and I don't like it. In retirement planning, life expectancy is a very important factor, and though you don't really know the number, you can come up with a reasonable estimate to use for planning.

To improve on that guess, we might want to look at average life expectancies, which is what a lot of financial planners do. Average life expectancy is a function of your age, by the way. In simple terms, it says that "the older you are the greater your age will be at death". It's not the same as "the older you are, the longer you will live" - that makes no sense, but this actually does. If you've made it past infant mortality, the overall average age at death goes up. If you make it past your teens and 20's, it goes up again. If you make it through the 40's and 50's when aggressive diseases sometimes take hold, the number goes up again. Just for one example, if you were born in 1960 (like yours truly), your average life expectancy at the time was around 70 years. But if you've made it to 60 years old (I'll get there this year) the new life expectancy is now 79 years, on average.

Your sex matters as well - women outlive men by 5 years on average, in the U.S.A. Life expectancy is also affected by where you live. Hong Kong is the place with the longest lifespan in the world, 88 years for a woman and 82 years for a man, as compared to the U.S.A. at 81 (F) and 76 (M). The U.S. is ranked #35 for life expectancy (out of 184 countries listed by Wikipedia), behind mostly Asian and European countries, for what it is worth.

Family medical history is a big factor as well. My father lived to 86 and my mother is still doing great at 84, so those are good signs for me to live a long life. Deb's family has had some go at a young age, and others live a very long time. Averages often don't tell the whole story. In fact, Deb and I have had too many of our friends and relatives pass away too early, much too early. I'm talking about people passing on in their 40's and 50's, people very close to us - best friends, my brother Dale, etc. That has had a big impact on both of us, and motivated us to move on with our lives before we might have done otherwise.

So how long will it be for you? It's an odd question, and many people don't want to discuss it. Retirement planning is literally plotting, in a big picture kind of way, the entire time from now until you die. It sounds morbid, but it doesn't have to be. I like to think about the wonderful life we all get to have in this time period, if we choose it! Life expectancy affects almost every aspect of your retired life in one way or another. Here are some examples of things it affects, or at least things that your estimates affect:

Average life expectancy is a starting point, but you can take another step. You can't know with certainty how long you will live, but there is a website that will fine tune the numbers quite a bit.

Actually, there are many websites that try to help in this area, but my friend Mark told me about Living to 100, and I like it. It's good for its simplicity, and I love the fact that it gives me a big number. 🙂 You go there, answer a bunch of questions, and it spits out a more accurate "average life expectancy" for you.

Is it accurate? I have to think it's much more accurate than a simple overall average of all human beings. It's a fun exercise and I've run it several times. I came back to this recently and the first time I ran it, I was told I'd live to 87 years. That's fine, but you can click recommendations on how to live longer, so I did that.

It said if I would lose weight I'd live another 5-6 years. I'd already lost 10-15 pounds and although I don't consider myself skinny, I don't think I'm doing too badly. So I went back in and answered the questions again, and noticed that I entered my weight, but I'd skipped over the height question. It had defaulted to "Less than 4' 11". So yeah, at 160-165 lbs, and 4'11" or shorter, I can see why they might want me to lose weight! 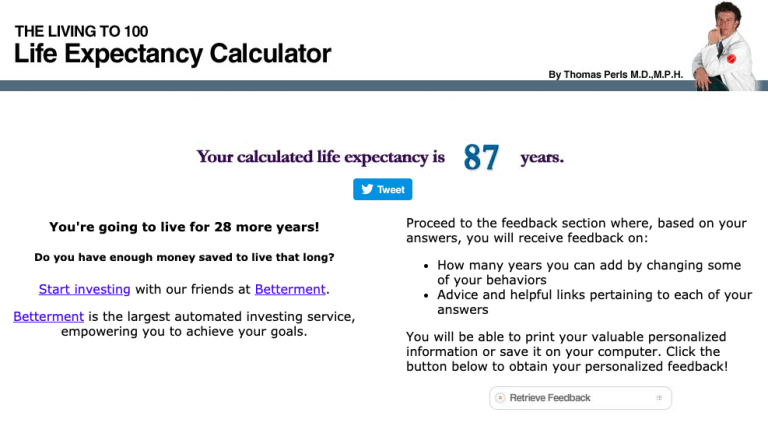 After significant consideration, I decided to do one optimistic set, where I plan to do more things "right", one pessimistic set, where my bad habits take over, and one in the middle, the one I most expect is accurate. That's how I got the number 92. If I'd known I was going to live this long I'd have taken better care of myself! 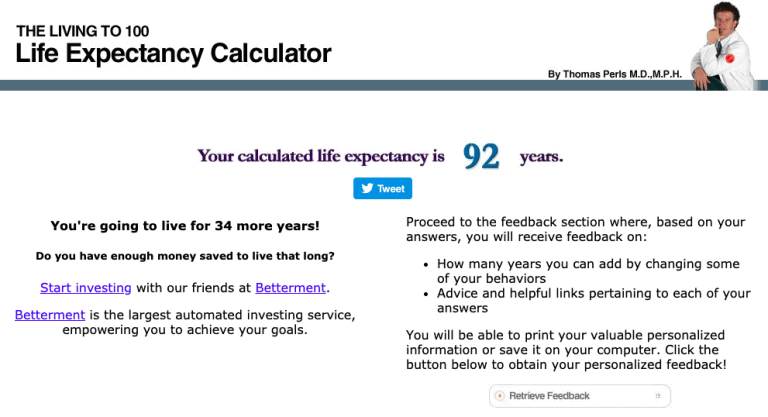 It was interesting to me also that the optimistic run only spit out 93 years. Granted, I wasn't lying and putting in things that I'd never do, I was just being positive about the types of things I might actually do. I suppose I could game the system and get the number higher, but that's not the point. The pessimistic run was in the high 80s, for what that's worth.

By the way, some of the questions in the quiz are about lifestyle, activity, foods we eat, mental health etc. We talked about this in our blog post  How Long Can We Live Like This? so check that out if you're interested. 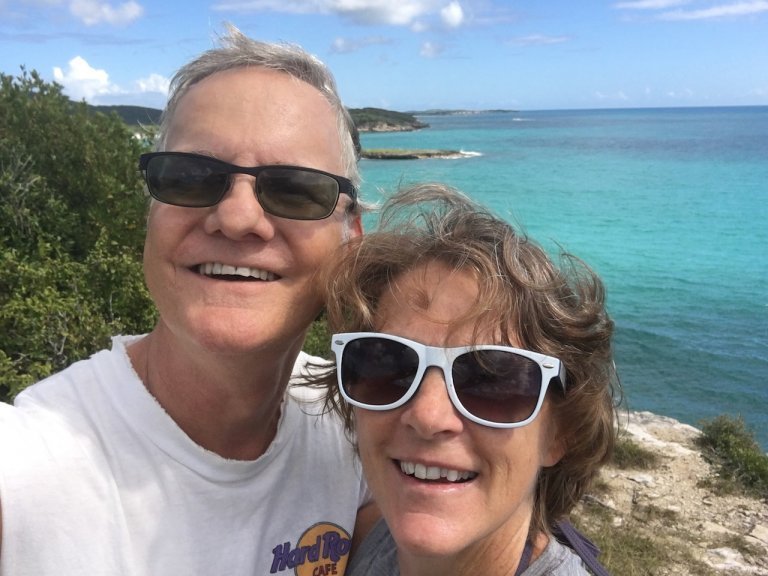 So now I have a number to use for planning. If it's close, say plus or minus 5 years, that's about all I could hope for. And that's good enough for planning purposes. Deb's number was 93!, so since she's younger than me, she'll likely outlive me, and that's part of our planning as well. She doesn't think that's true BTW, but either way I'm not sure anyone wins in this contest. If you are doing retirement planning, I urge you to give it a try, if not with this one, try a different life expectancy calculator. It's a smart part of retirement and financial planning. Just do it.

TODAY'S SPECIAL: "Growing Older but Not Up", by none other than the one and only Mr. Jimmy Buffett. "Let those winds of time blow over my head. I'd rather die while I'm living than live while I'm dead".

PS. I'm going to be really mad if I die next week, but what the hell - at least I put out one last blog post.

(NON)DISCLAIMER: We have nothing to do with the livingto100 website, we just like how it makes us think about the future. There may be other, better ones out there.

Posted in Life, Other, Retirement
← Island Hopping IssuesIt Changes You →