We love where we live and we love our lives, and frankly it would be hard not to! Of course, no matter where you live, there are issues (as we've discussed in the past). But we didn't come here to complain. No, we came here to enjoy, to experience, to live! So we started meeting people, lots of people on this island. We've still got a long way to go, but we're at the point where we don't go anywhere without saying hello to someone we know. And we love our new friends here, locals and transplants alike. We love the Puerto Rican and Viequense cultures, and definitely the beach and island culture. We love the beach parties, the dance parties, and the sunset parties (usually these three are all the same party).

But once in a while we can grow a little weary of it. We truly are small town people at heart, and sometimes eight to nine thousand people start to feel like hustle and bustle! Kenny Chesney says "Everybody's got a place they go, when the old battery gets runnin' low...". And yes, you even need getaways from tropical islands (although they are often to other tropical islands)!

Deb and I were talking the other day about what we love about this island, and we quickly focused in on our hikes to remote and deserted places. These are small but joyful getaways for us, which actually started in Utila, Honduras. There are very, very few cars there, and the bike rentals were jokes, so we just walked and walked and walked. We usually had a direction, but not always a destination.

We continue this today every chance we get, so we thought we'd share some pictures of these wanderings. Most of these places won't show up on our Vieques Beach Map, although there is an exception here and there. Sometimes a deserted beach can be found by simply getting up early, or picking a good afternoon in the middle of the week when the tourists are nursing their hangovers. The running joke around here is that as soon as we show these places online, there will be an entrance gate, a gift shop for souvenirs, a parking lot, and soon after that Jimmy Buffett will start construction on Margaritaville Vieques! So how's about nobody tells him about this place, OK? Shhhh....

Now, we're not saying that these places are big secrets, as if we know things that everyone else doesn't. Locals will know where these places are by the pictures. As much as I like to fantasize about exploring a place for the very first time, in most cases others have told us where they are and to go check them out. So obviously we know that others have gone before us. Hell, good old Chris Columbus sailed through here quite a few years ago and told everybody!

But we still get a thrill walking down a beach with no tracks on it, or maybe only a few horse prints. The only thing that sets us apart from the crowd* is that we are willing and able to use our legs and hoof it down the trail, down the beach, and over the rocks. In some cases, it's also our willingness to scratch up our small SUV getting lost on overgrown jungle roads. That is one of the main reasons we bought an "island car", so we don't have to worry about it.

*BTW, by Vieques standards, if a beach has a dozen people on it, that's a crowd!

We found one of our favorite places by plotting it out on a satellite view, and then going out in our little island SUV. We drove out to the spot and boldly drove down the jungle road, only to find that it turned into a dead-end of overgrown bushes. We were going to have to back up for a quarter mile, so we decided to do one of those Austin Powers multi-point turns, pushing into the bushes on each side over and over again. Once we were out, we consulted the satellite image again, and found a way around it down another road, scratching our car on all sides along the way.

That hidden road led to a USFW road that eventually became too rutted to go farther, and getting stuck out there would have definitely been no bueno. It didn't matter, there was a closed gate a hundred yards down the road from where we stopped so we pulled the car into the bushes and walked the last half-mile to the deserted beach. We loved that place! And we still do even though a few weeks ago, they graded the road smooth and put a parking area at the end. They paved paradise and put up a parking lot! Not really, pavement is as rare as diamonds in Vieques, but when we saw it, both of us started singing this song! 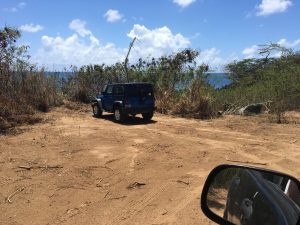 Oh great. Now we have to share this 3-mile beach with 2 other people!

So with that, let's see some pictures shall we? The first ones are from that beach just beyond the newly rebuilt "parking lot". You can see the pure, natural beauty - that's why we love it so much. 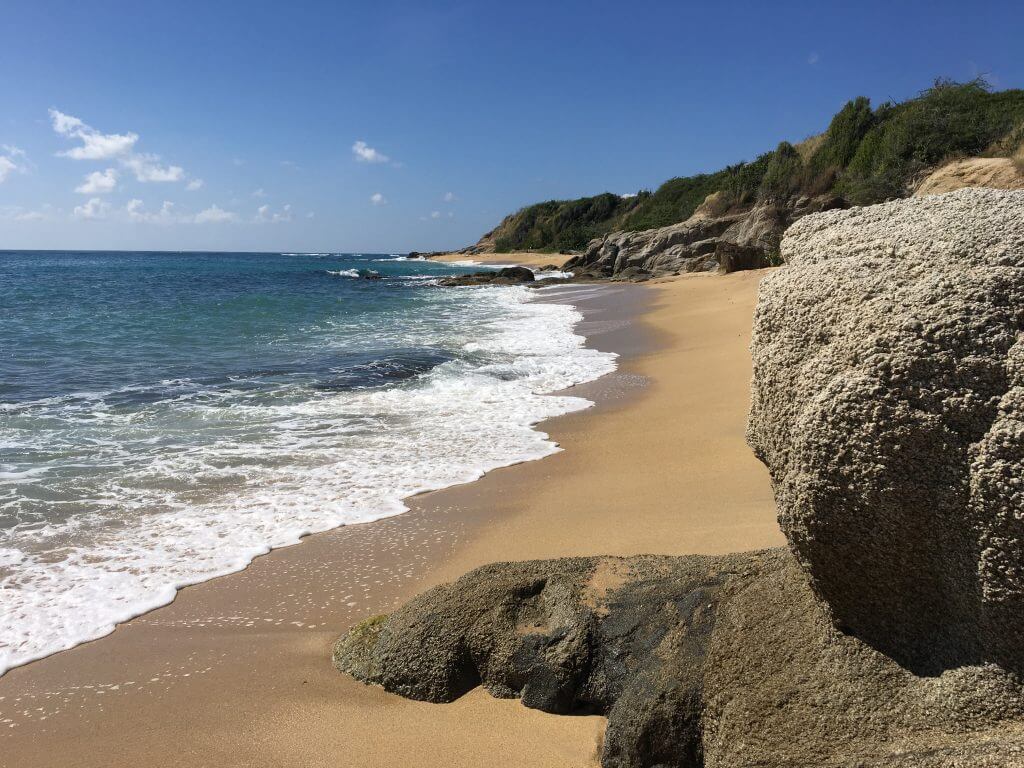 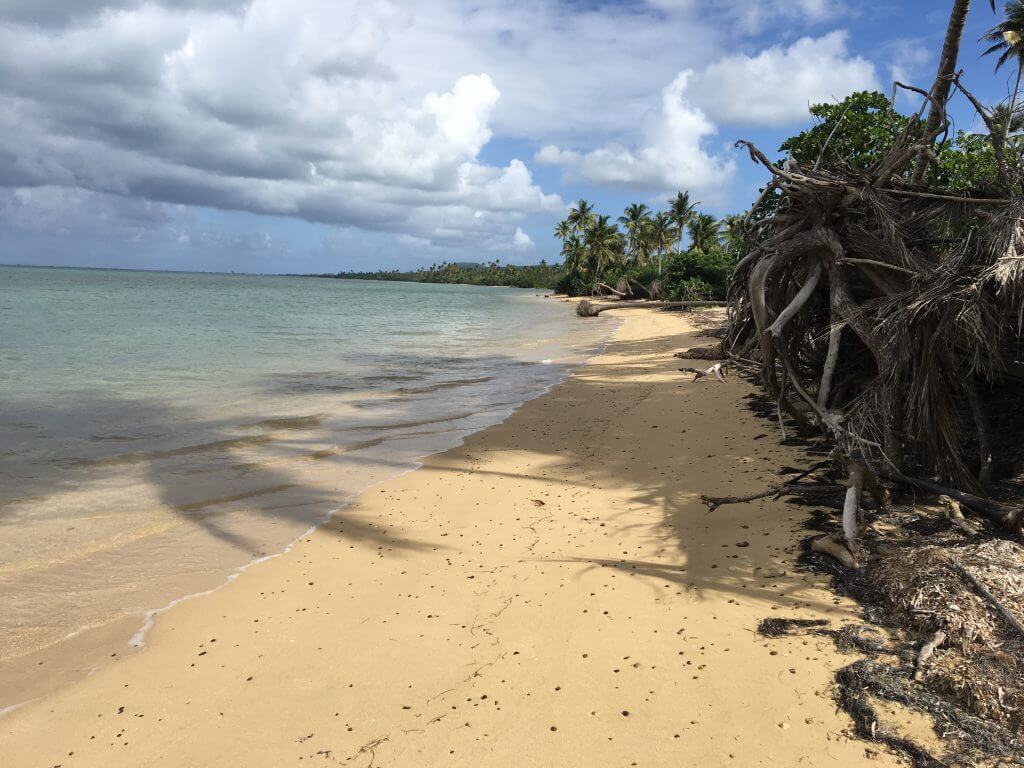 And now a different beach... 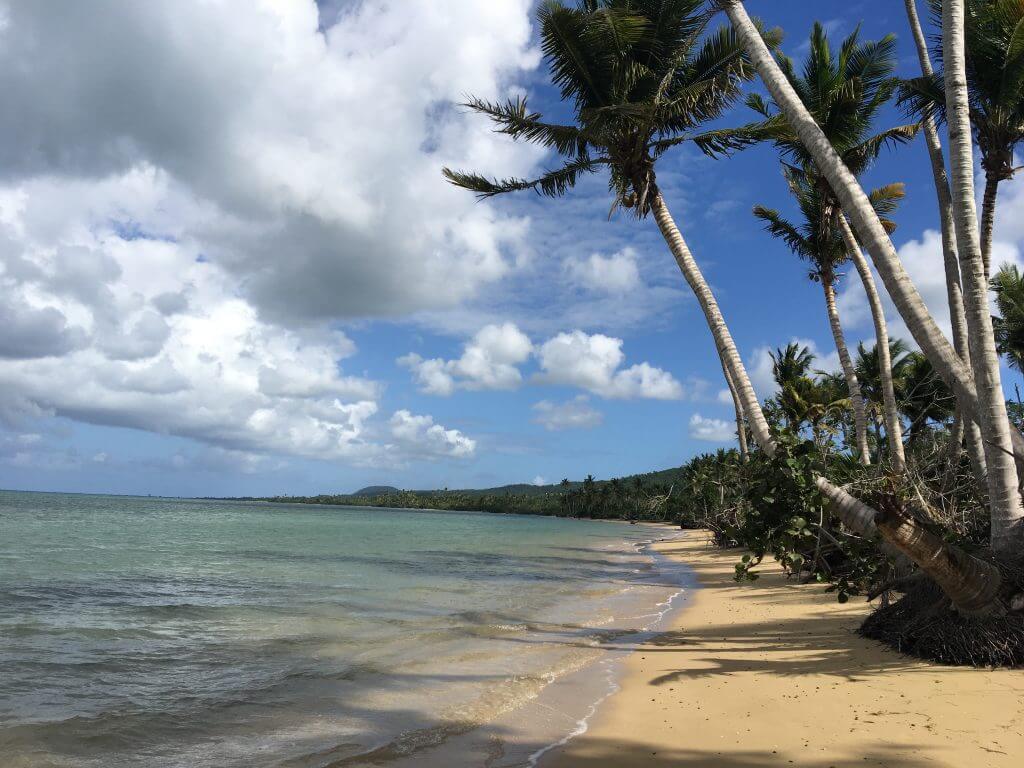 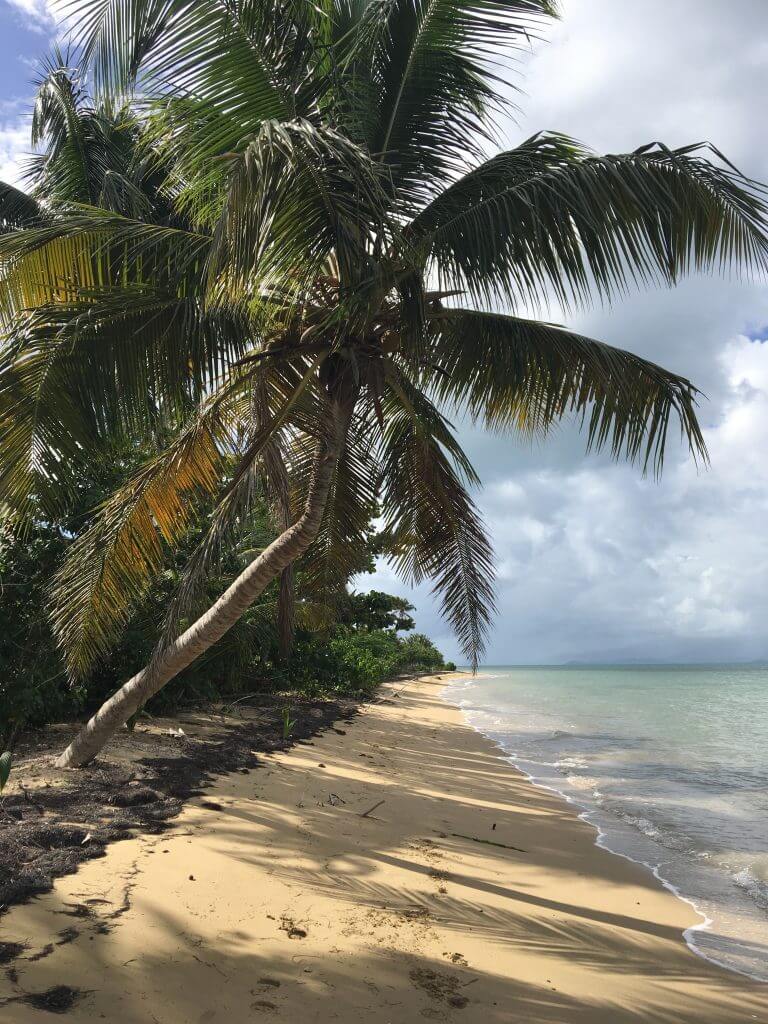 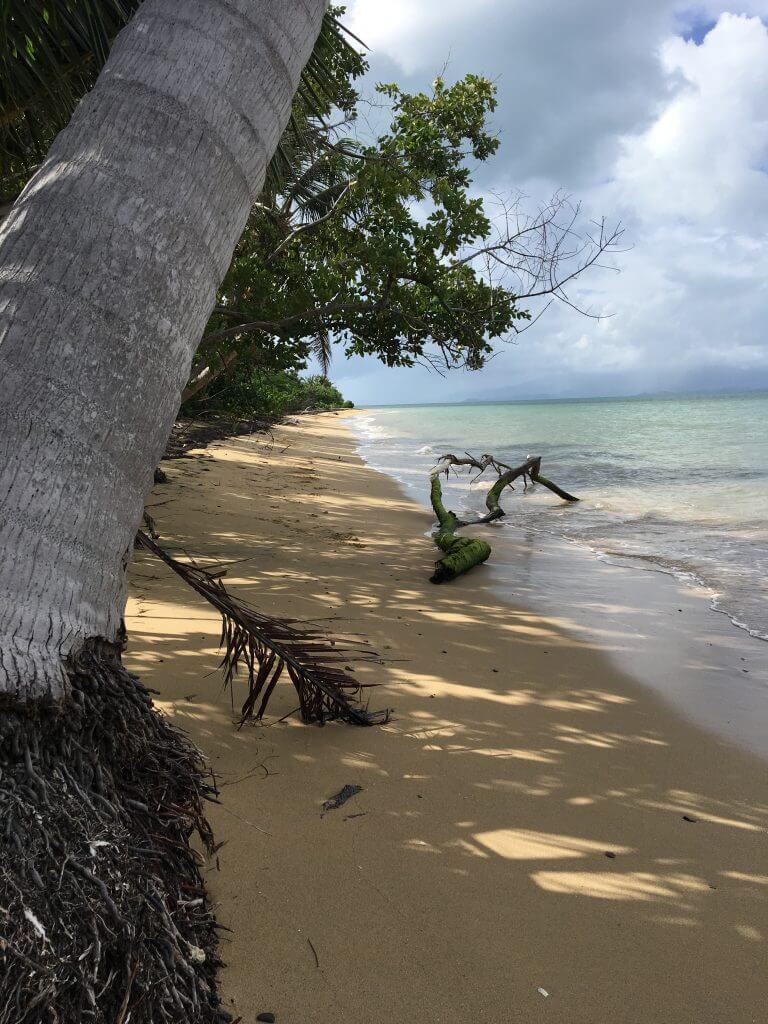 You get the drill... 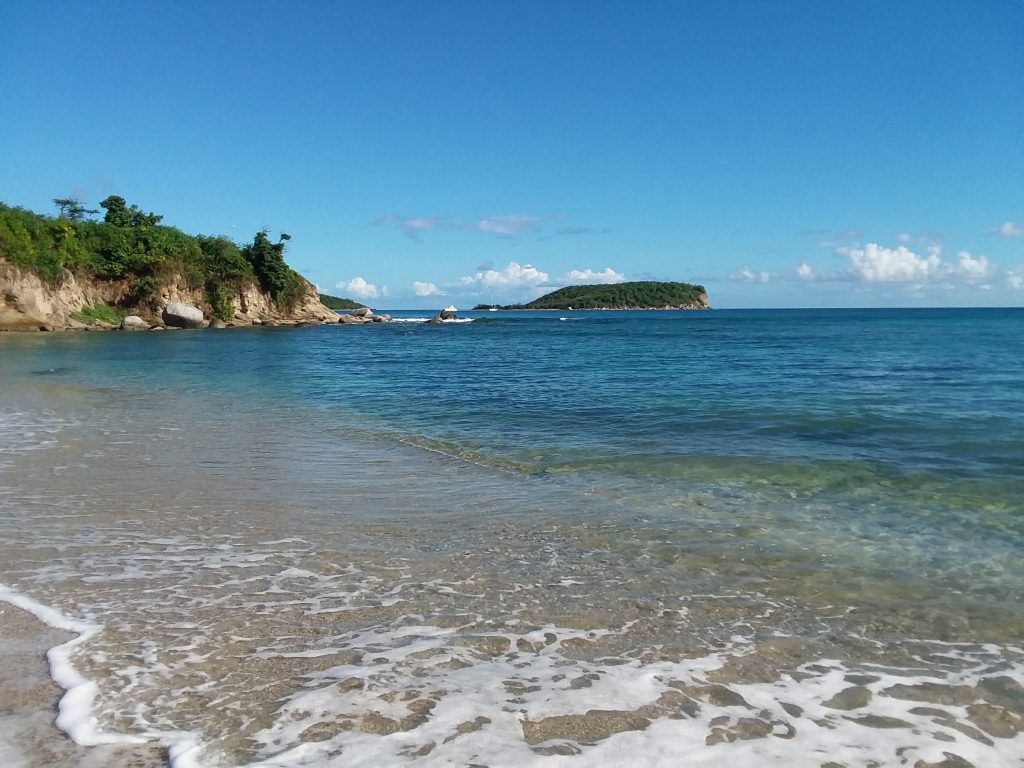 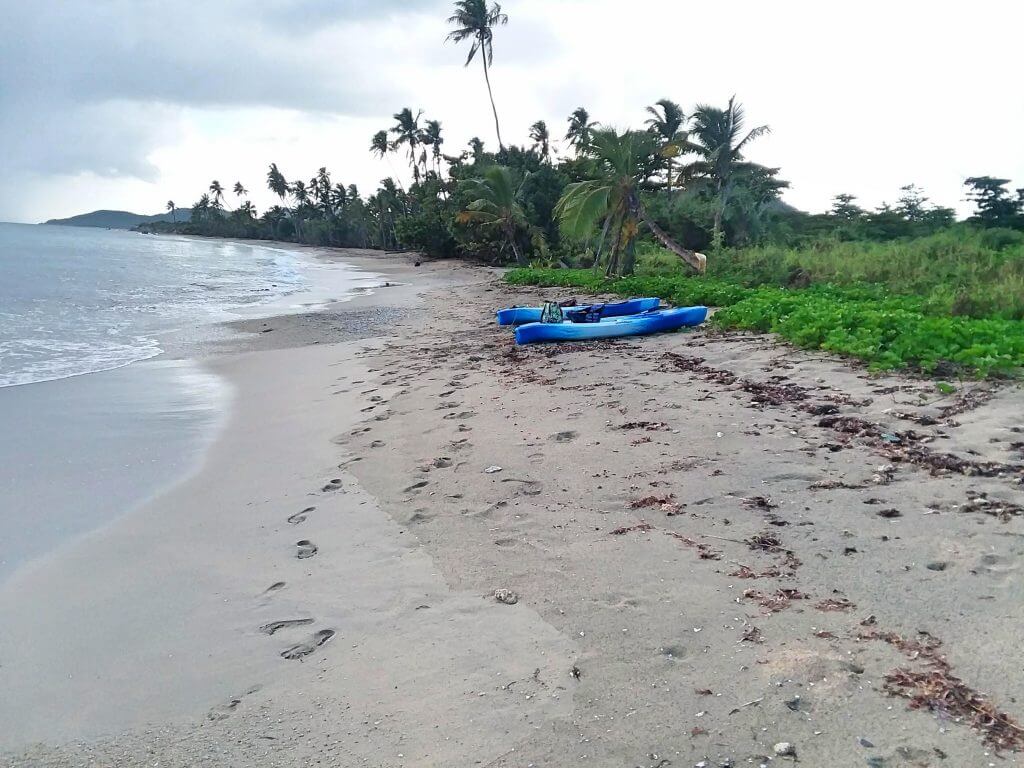 Just one more beach I swear! 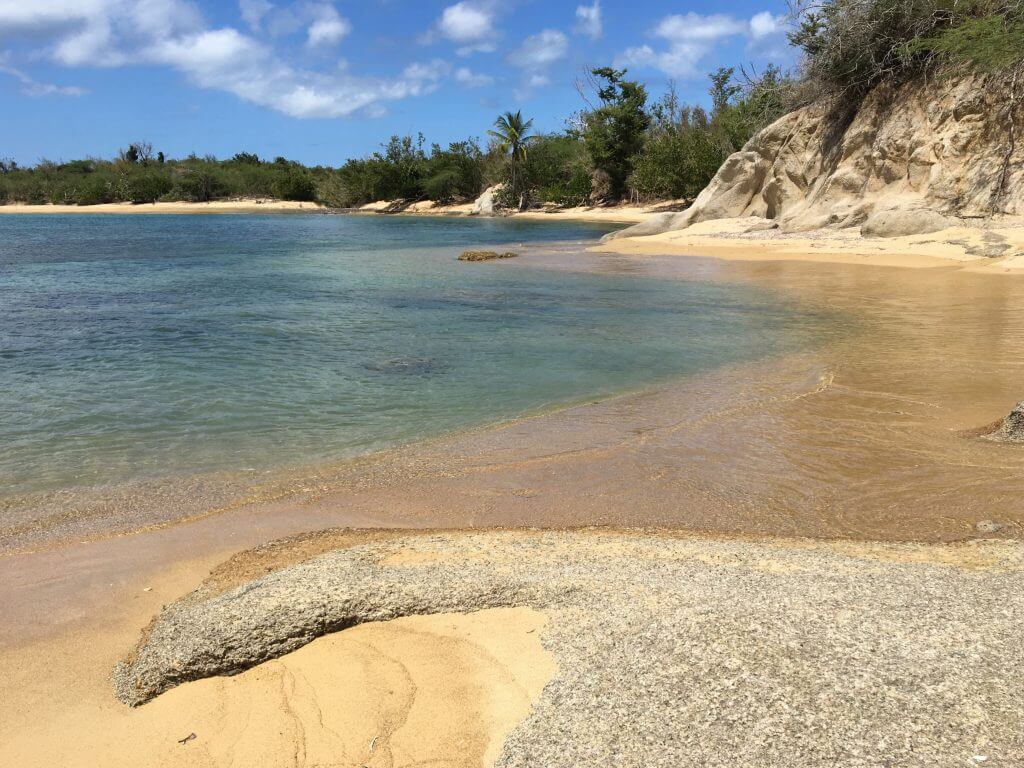 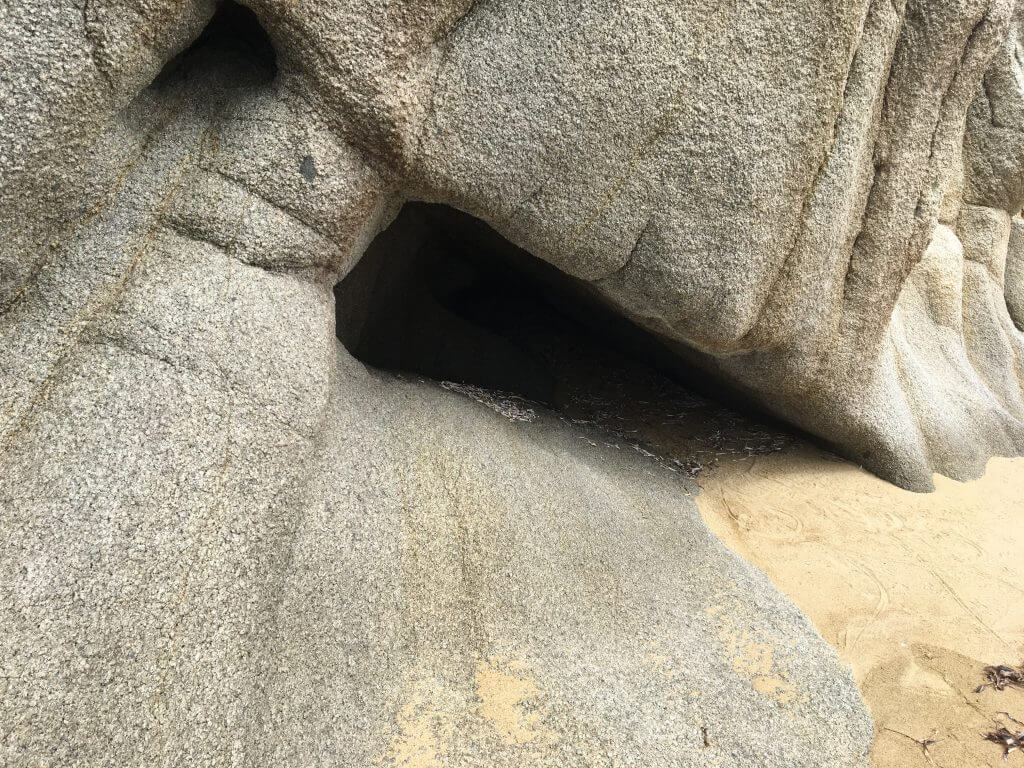 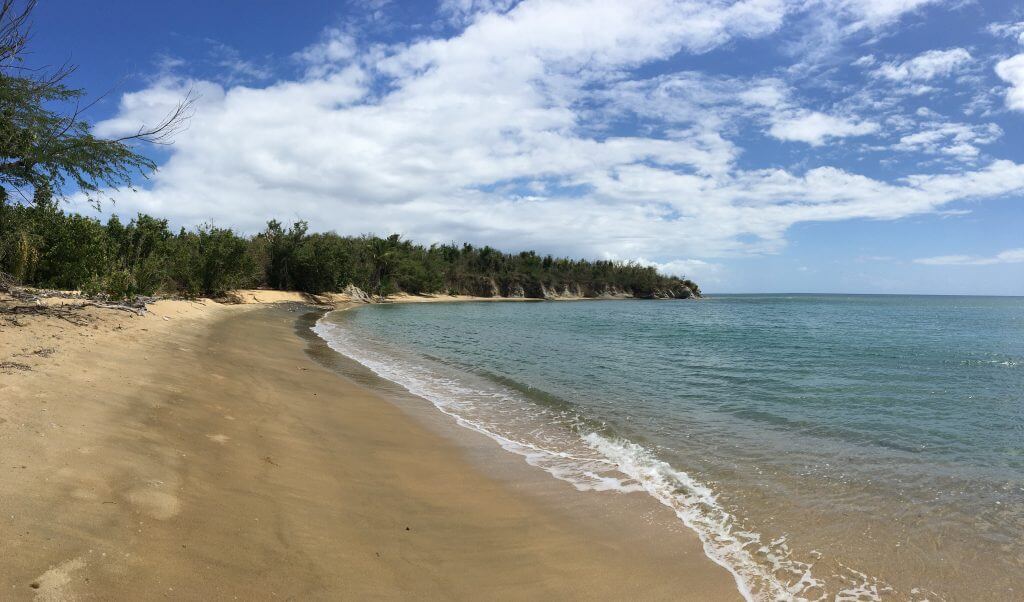 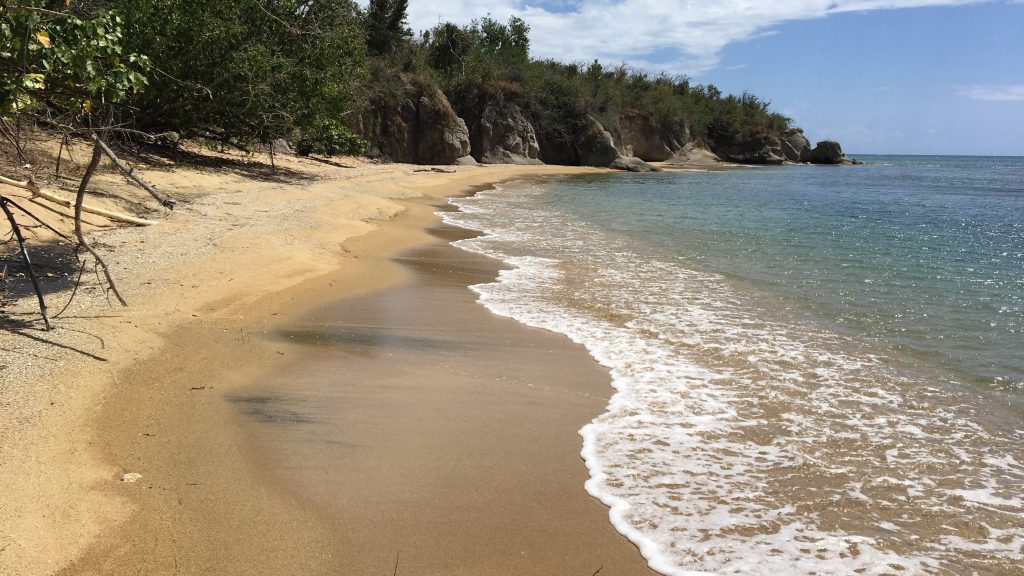 How about some cliffs? 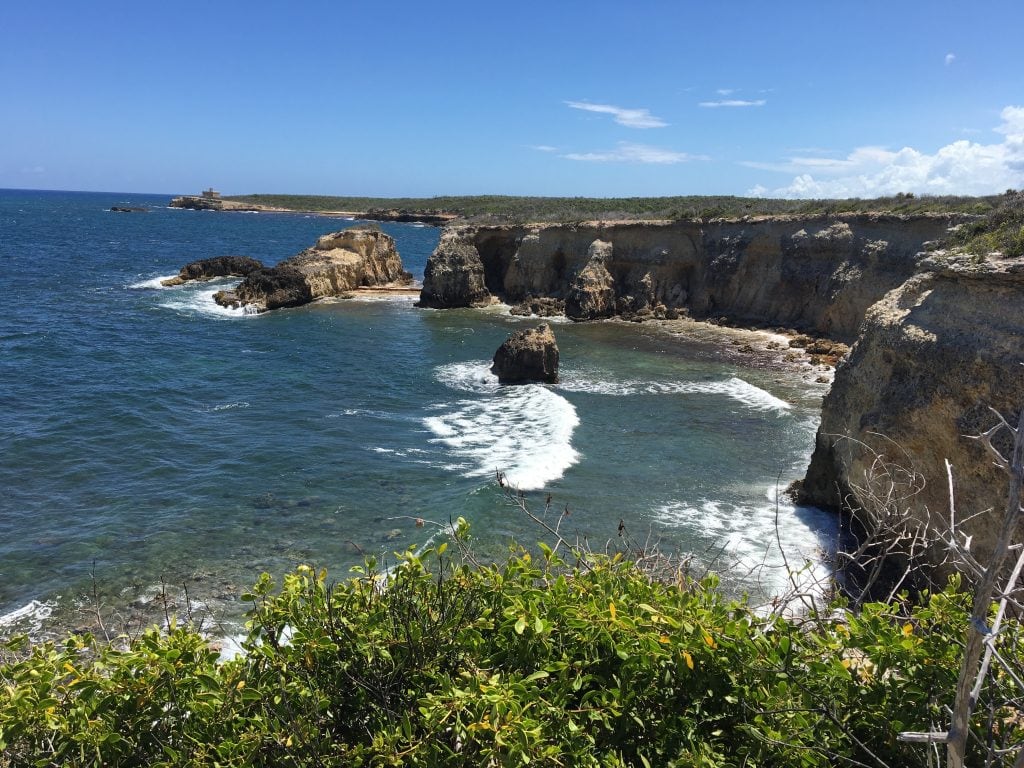 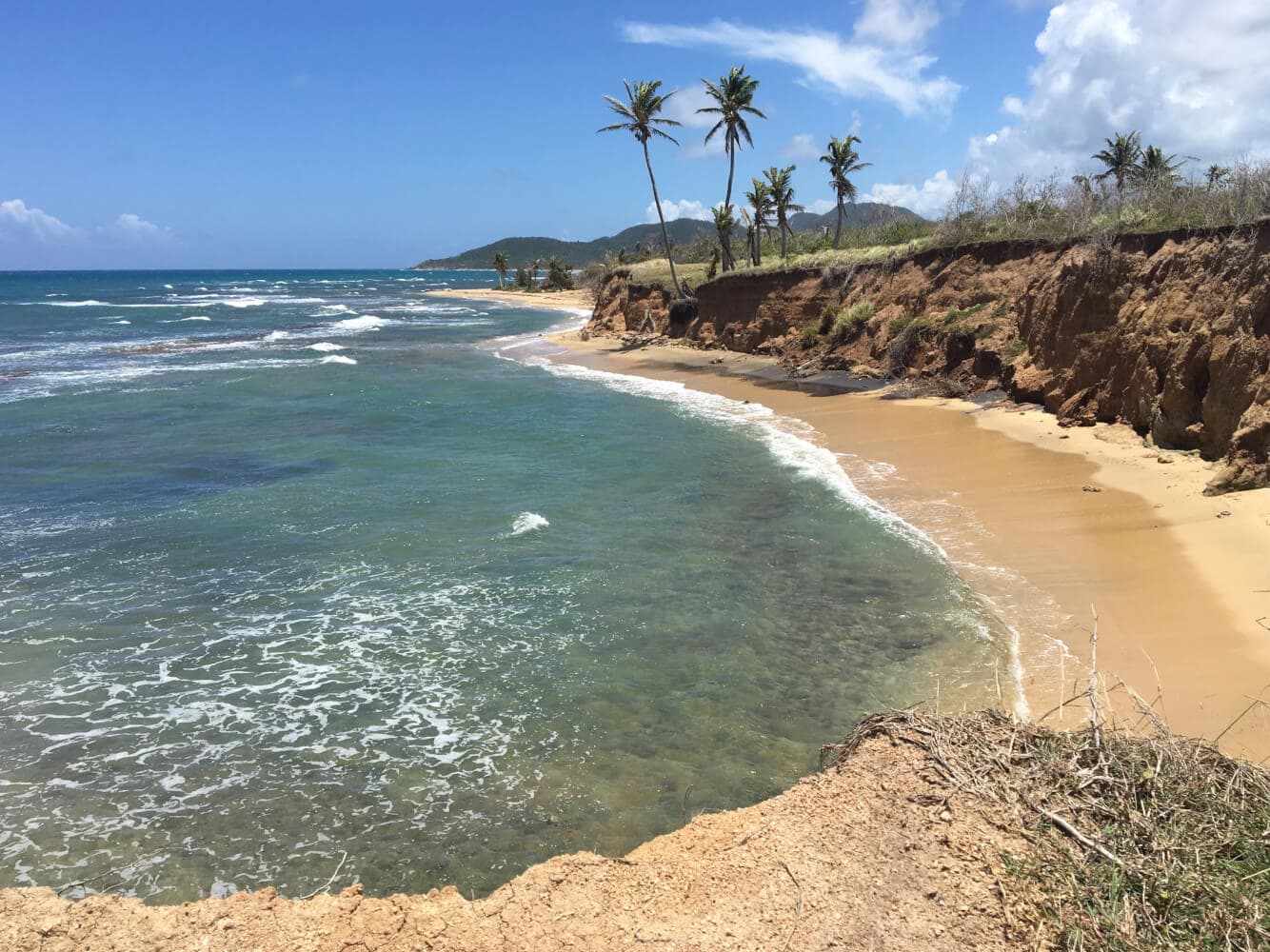 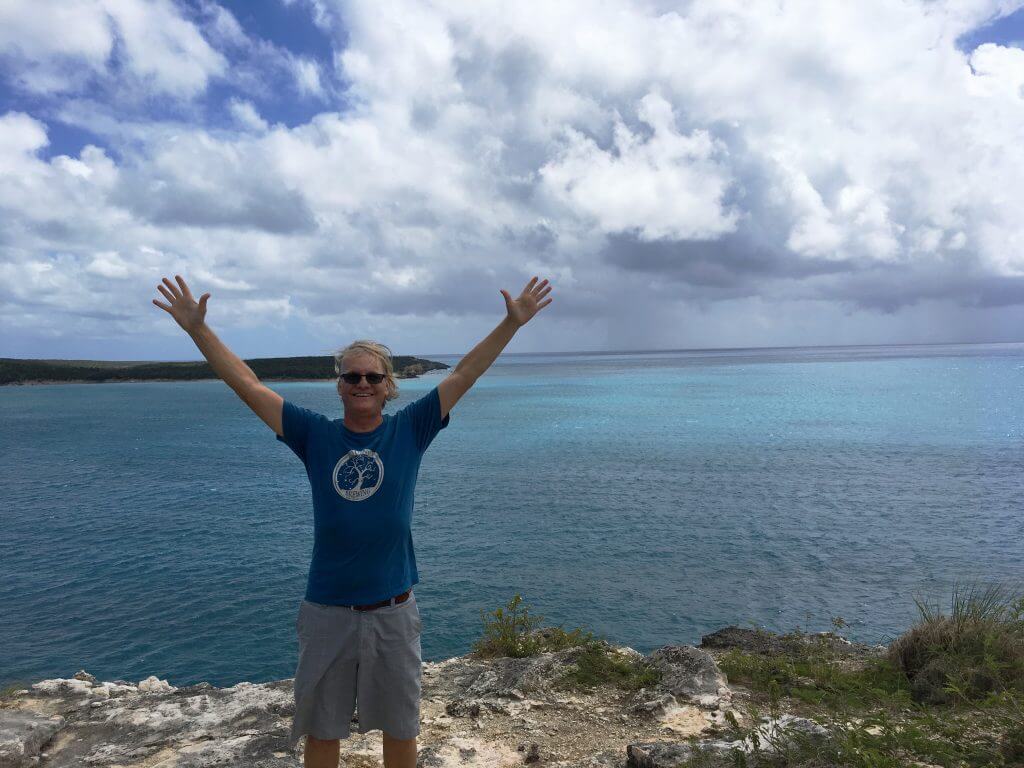 OK then, how about our version of a mountain? 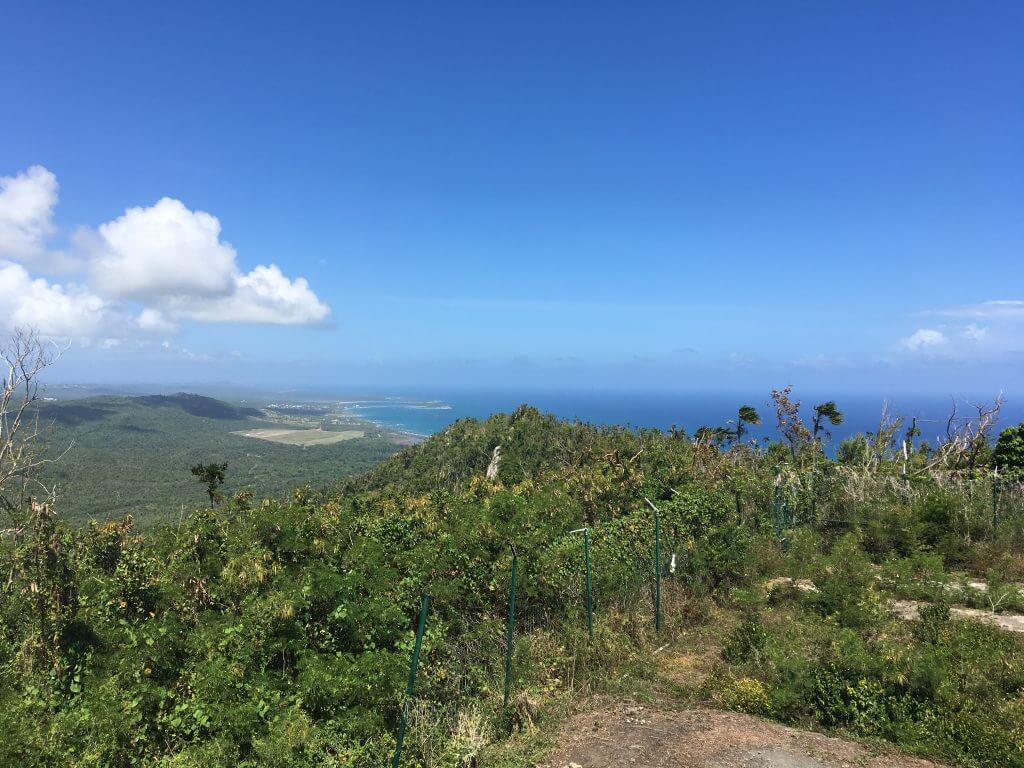 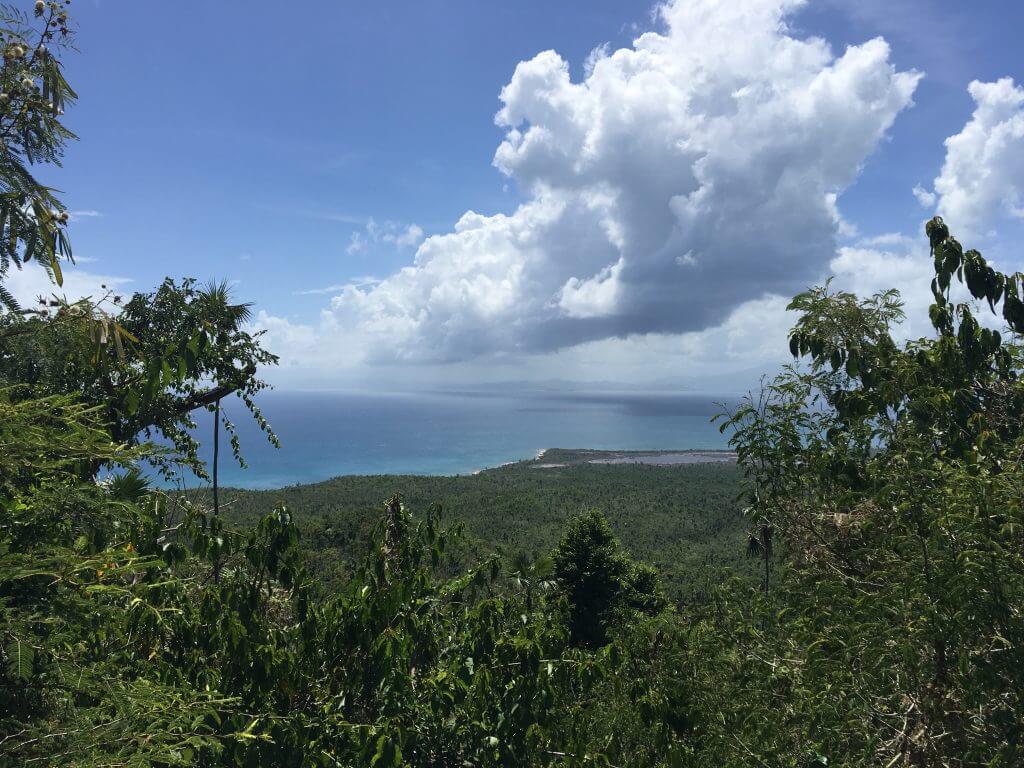 OK, one last beach. Don't look at me that way - we're on an island after all! This beach you have to wade to, through the water from the other beach. That keeps 90% of the people away. 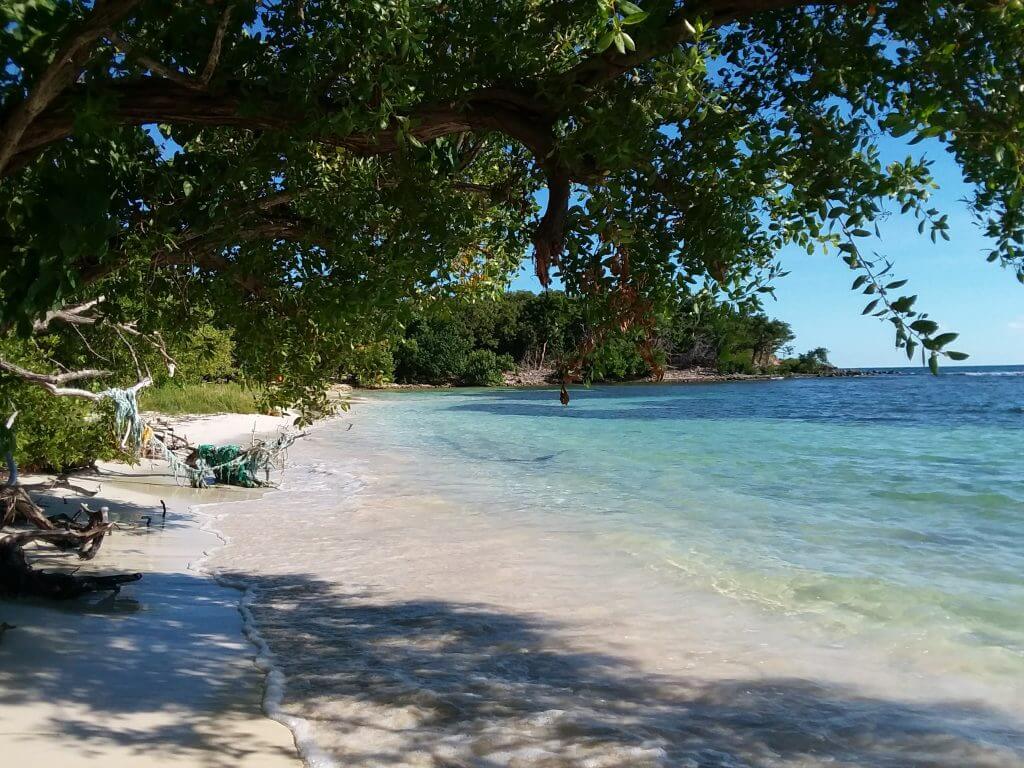 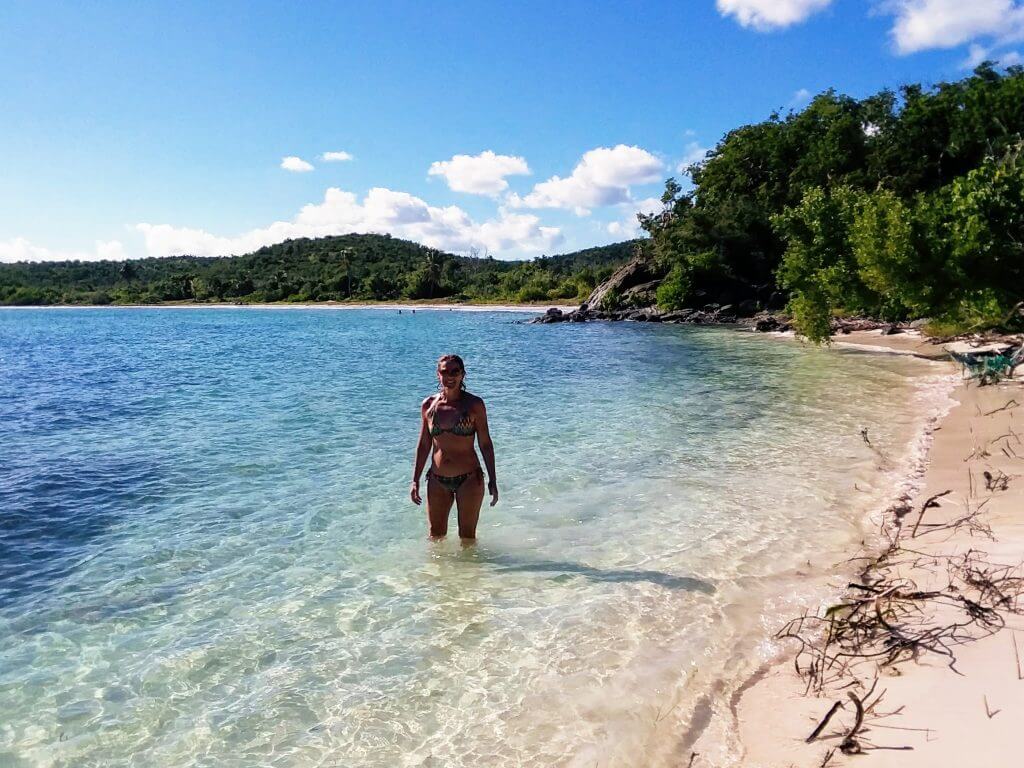 With our personal peace restored, we can go back to "civilization" and all those people! 🙂 Deb says we finally arrived somewhere when we should've, because nobody is telling us "you should've seen this place 20 years ago!" like every other place we've been.