Two weeks after my retirement day was the estate sale (see previous post) and two weeks after that we closed on the house. And for most of that second two weeks we lived in an empty house with a blow up couch and some camping chairs borrowed from the neighbors. Somewhere in there I sold my commuter car to a friend who needed one. The day the house was sold was the day that we became unemployed AND homeless, and it felt great! 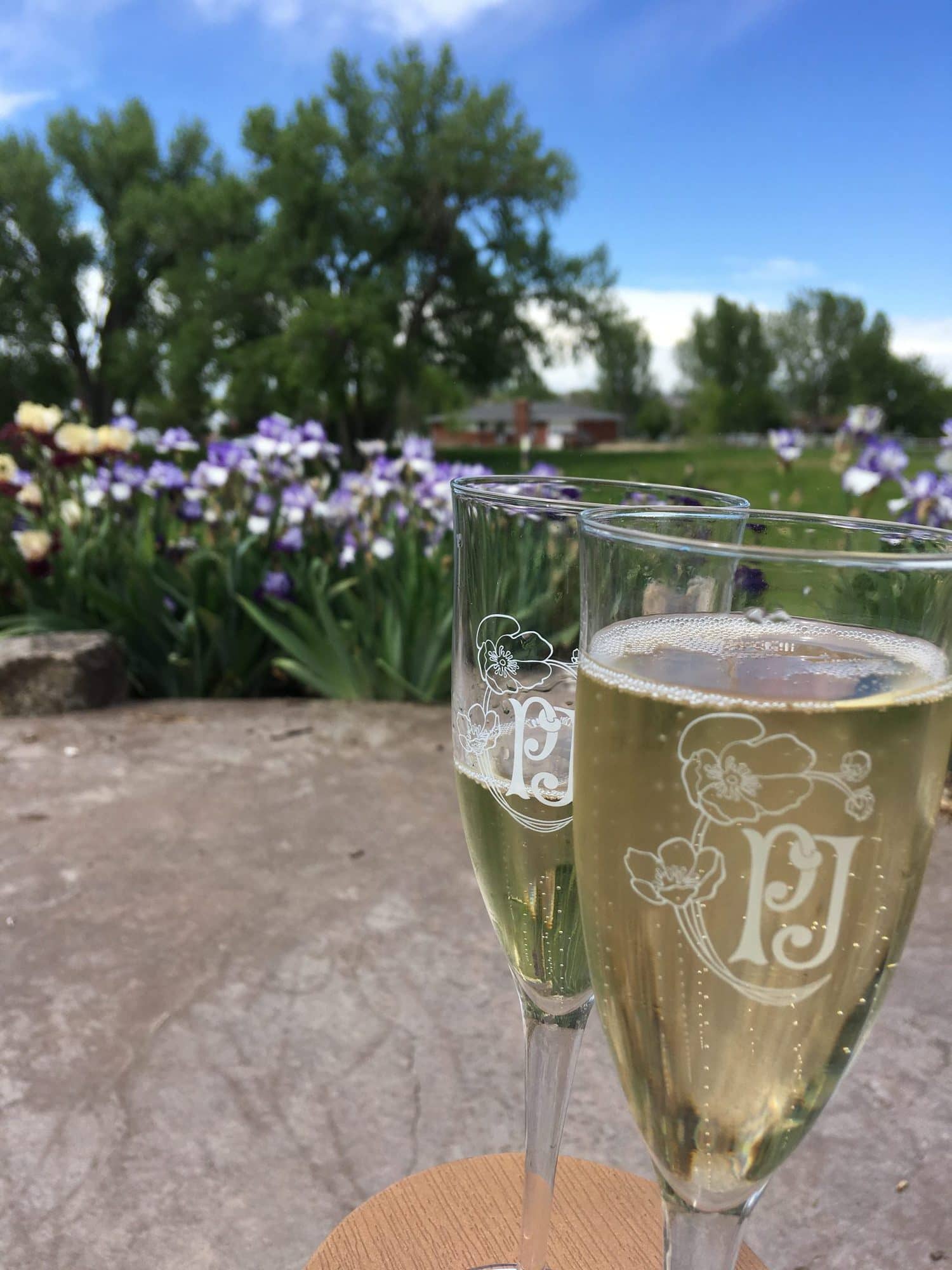 We moved across the street to our friends JT & Dannas' house (photo above from their front yard) and started another 2 week stint, this time house & cat-sitting job with Rocky, the elderly feline. We were already a week into a 3 week dog & housesitting job for our son Zack and his girlfriend Danni while they were in Europe (where he proposed, and she said yes!). Their dog Hanz is a big beautiful Golden Retriever puppy and he'd been spending time at our house while we finished clearing it out. Once the house was gone, Deb asked, “Is this what being homeless feels like?”. I didn't know, but we were down from 3 houses to only 2! 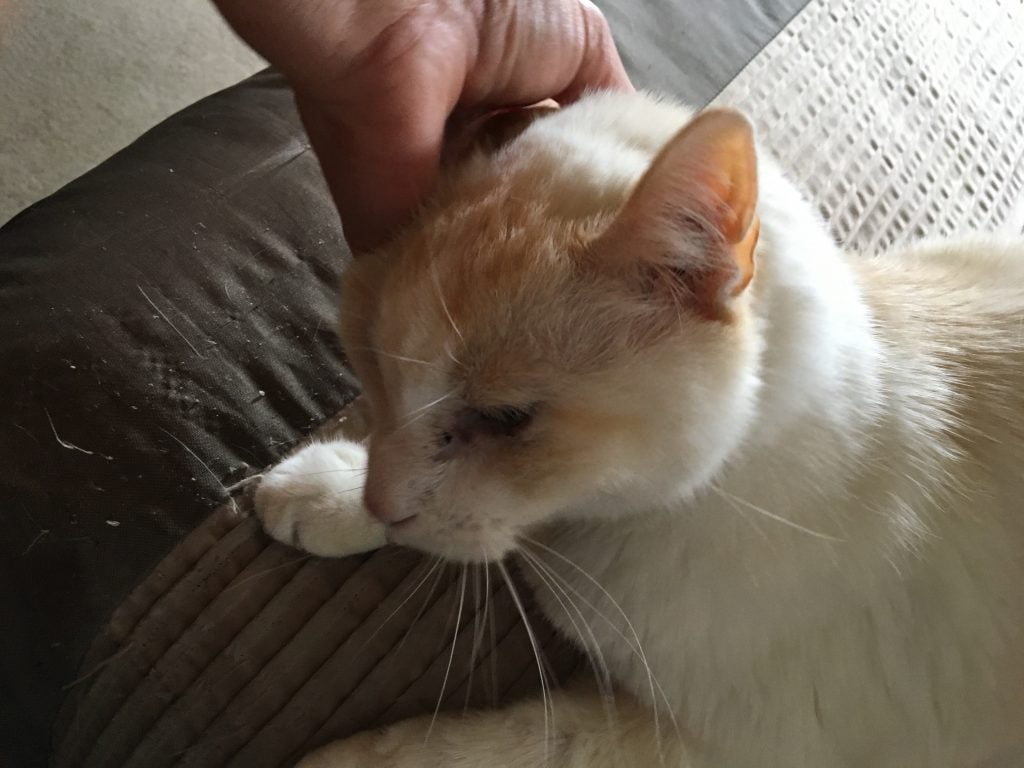 Danna & JT were away on vacation while their house was undergoing a huge renovation, so we got to meet some cool construction guys and practice a little Spanish. The jackhammering only lasted 4 hours so after that it was smooth sailing! It was actually fun to watch the progress (chaos) without the stress of us owning the place! Actually, both houses were under construction, the kids' house was being graded for proper drainage, and having a new lawn plus sprinkler system put in – it also had a huge dumpster out front for weeks that everyone had to work around. Deb said she'd been looking forward to the changes - this was part of the adventure, living in different places and different environments, going with the flow...

The two animals were Yin and Yang. A 19 year old laid-back cat who knows what he wants and how to get it, and an 8 month old 65 pound puppy who is all energy and power with very little direction. Those two got along fine with a little care on our part, so that all worked out great. And of course we had the Littles, for those who don't know, that's what we call Kirby and Max! (They'll probably get their own blog post later). We even got a short visit from our other son Matt and his girlfriend Amanda. That added 2 more big dogs to the mix! Don't they say the more the merrier? Hanz got to meet his furry cousins and he wore them out just like he wore us out! It was a great time, but it was the beginning of the tearful goodbyes. 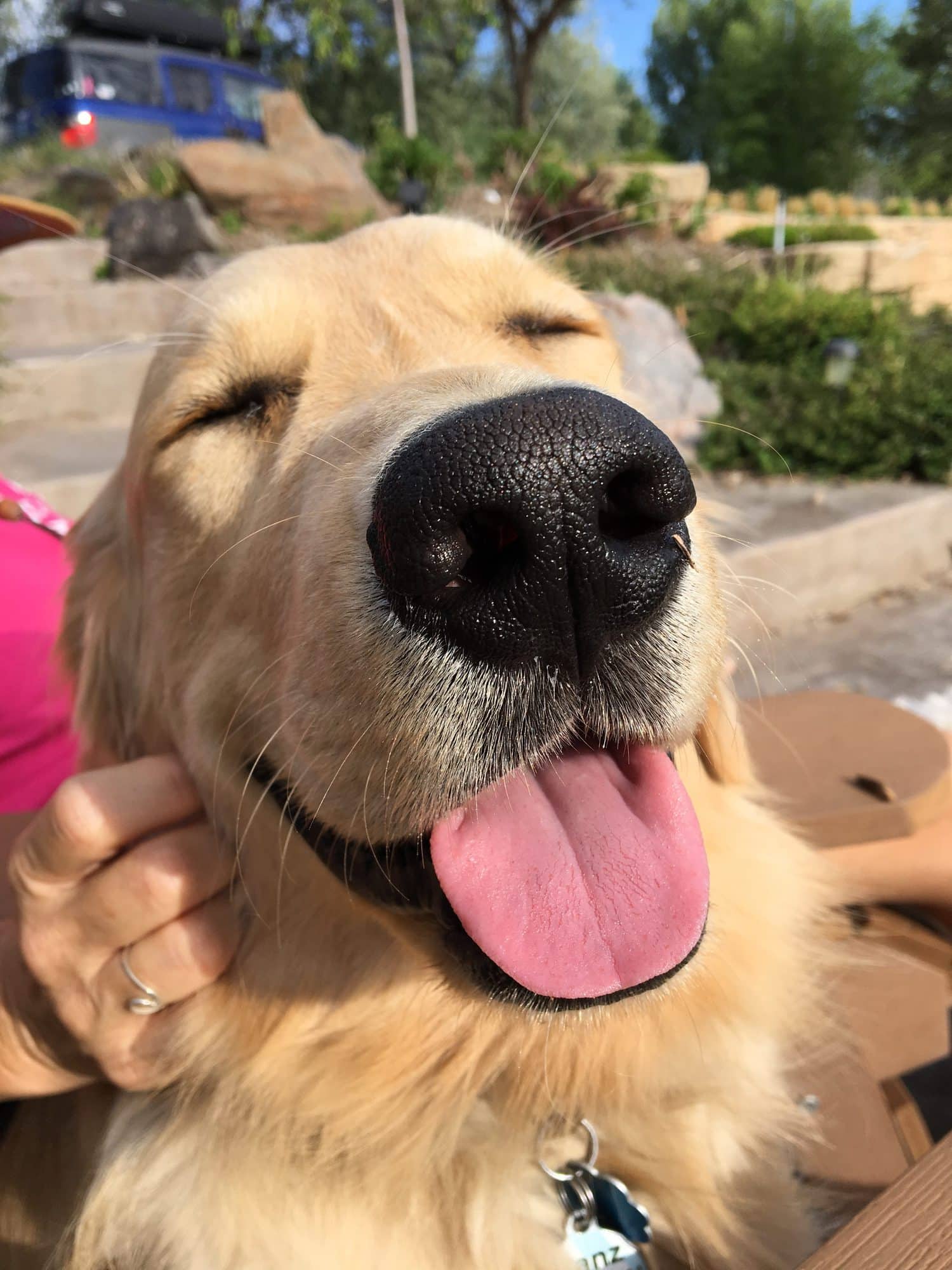 We took a couple of trips to Westminster (CO) during the next two weeks to Hanz' house to help make it livable before his parents returned (they bought it just before leaving for Europe!). That included keeping an eye on the landscaping contractor, doing some wiring and vent piping, straightening up the garage, building the guest bed, etc.

During this time, being retirement newbies on the learning curve, we were constantly getting confused between Early Bird Special and Happy Hour. It's the same thing, right? We had a going away party with some very close friends of both the bride and groom (Deb and I, not Zack and Danni). 🙂 It was at Deb's close friend's house (thanks Tom and Faith!), an awesome place for a party, and was quite a bash. The only disappointment was that the keg was still half full at the end but that turned into a happy house-warming gift for Zack. It only made sense - he already had our old beer fridge, with a tap. We had a lot of sad goodbyes that day; these were harder than expected. Much harder! It's silly to not expect it, leaving friends we'd had for years and years. How could that be easy? It really wasn't, but we knew we could stay in touch (with things like blogs, texts, email, Facebook, Facetime, etc.). We're keeping up that part, so we feel pretty good about it, but we definitely miss our friends! Once all the home owners returned, we were off to Deb's parents' house for a couple days to pack and get ready to drive to FL.

Another thing that was anything but easy: packing for the Florida trip. We took over Deb's parents' basement and laid everything out, you know, two backpacks and two duffel bags worth of stuff? Once it was all laid out, you could tell immediately this stuff wasn't going to fit! That's OK, Deb assured me, quite a bit of it is car-camping gear, or things specific to our FL stop that won't be going to the islands. A blow-up bed, a tent that fits over the back of the car, that sort of thing. A cooler, several bottles of alcohol we gained as gifts at the party...consumables are good gifts! And a big bin of food was part of this. A dog crate and gate that was only for the FL leg. A box of books that we need to read (and at a dramatically faster pace than we're doing now!). But pulling all that stuff aside, it still wasn't going to fit! 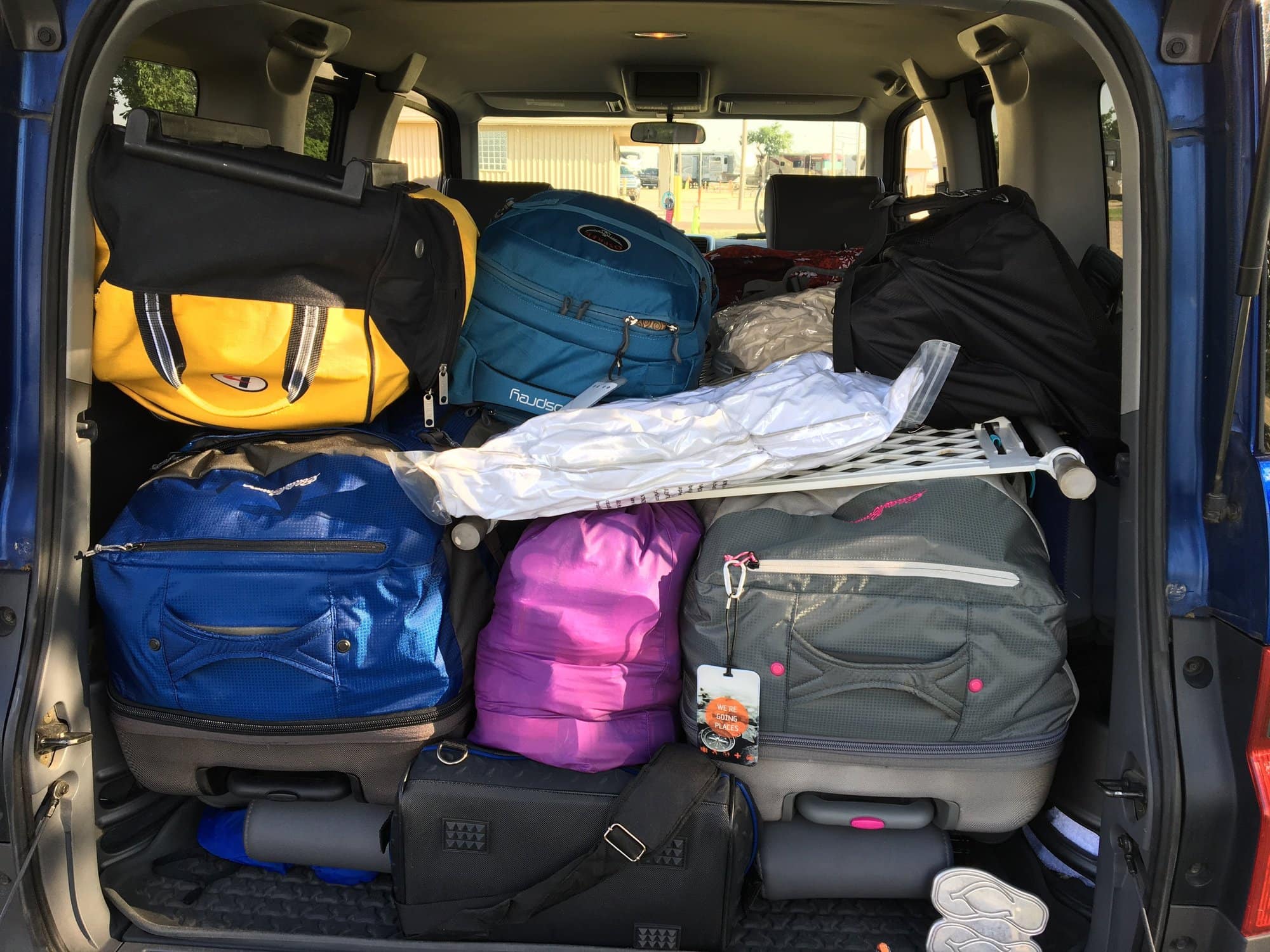 It's more than we need!

We realized we weren't being ruthless enough, and started pulling clothes out, some toiletries and sunscreen we had overbought, and various other little things, they will make it in the next stage of packing. At one point, Dave (Deb's Dad) showed up and said, “For someone who sold all your stuff, you sure have a lot of stuff!”. We agreed with Jimmy Buffett: times are rough, we got too much stuff! Man, this was hard! We were planning to go to Zack's house that night and we kept texting him and pushing our arrival time, first by an hour, then by two more, and then some more. It took about 8 hrs to pack!, but it was organized into the bags and into categories. Camping, water gear like snorkeling and doggie floats, household items needed for renting places. To this day that has really worked out. Somehow, we finally stuffed all that stuff into our bags and loaded the car. I think at the end, Dave was a little impressed, maybe just with the sheer volume of that Honda Element, but maybe a little bit with us. Once the car was full it was time for more goodbyes and lots more tears. This part was getting harder, not easier, but we did it, and we left Greeley where we'd lived and raised our boys for the last 2 decades.

Then, we had a couple of days at Zack's that was pretty relaxing. I was happy that I could fix his car while he was at work (Check Engine, running rough, turned out to be bad plug wires), and we dropped off some things he was going to store for us. Deb even had time to clean our car. After all, when you don't own much, you have a lot of free time. Then we packed the car again! It was a little lighter, and a little less packed to the gills, and finally off we went to points East and South. 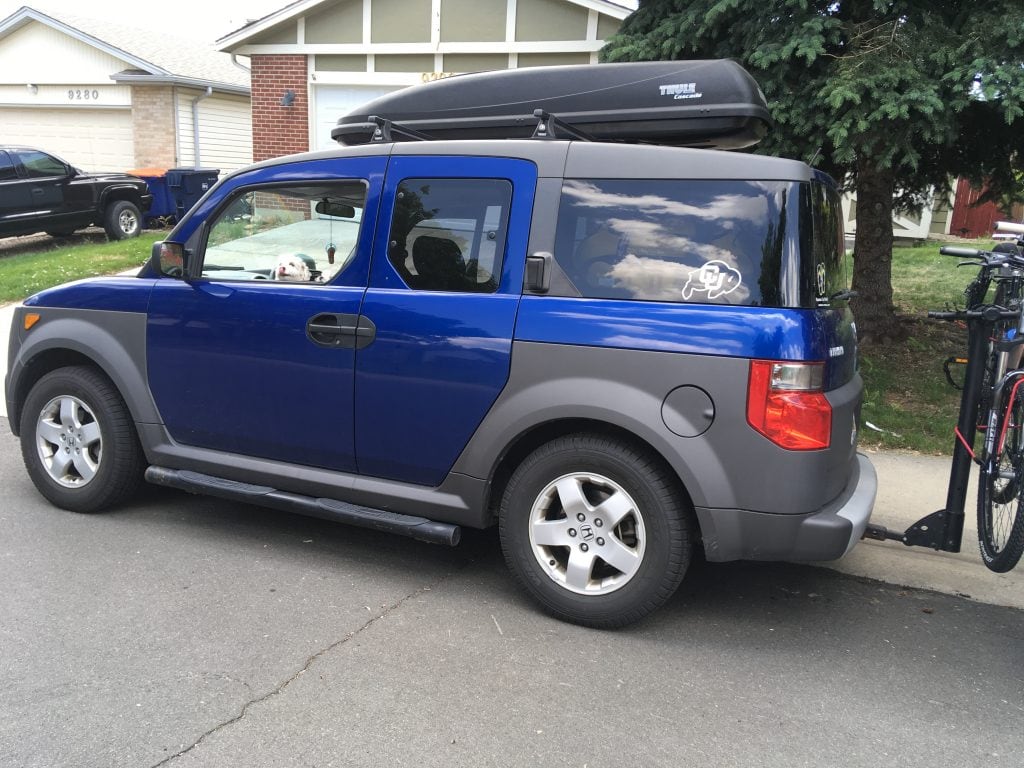 Adios Colorado! We spent 31 years in Colorful Colorado, almost 21 of them in that house on Kiowa Drive. We enjoyed the sightseeing, snow, skiing, snowboarding, telemarking, snowshoeing, hiking, biking, taking our dogs everywhere, world-class breweries & beer, golf courses, baseball games from Little League to MLB, frisbee golf, volleyball, ultimate frisbee, the list goes on and on. Most of all, we enjoyed the people, our closest friends, other friends and neighbors, the people in the stores and on the streets. We met some super cool people in brewpubs along the way, it's hard to stop with the superlatives, but the CO peeps should know you won't be forgotten by us. We'll be telling your stories to our new friends in Florida and in the Caribbean, and we'll stay in touch if you will. This chapter has come to an end, so... It's not goodbye, but until we meet again...

Posted in Travel and tagged Colorado, Road Trip, Stuff
← All That StuffDeep in the Heart of Texas →