Siesta Key is another barrier island similar to the one where I grew up. Many miles long, very thin, along the coast of the mainland, very familiar. I chuckle because on the east coast, these barrier islands are just called “the beach”, like Cocoa Beach, Melbourne Beach, Vero Beach, etc. On the west coast, they like to use the name “Key”, I presumed to piggy-back on the popularity and name-recognition of the Florida Keys which are a couple hundred miles south and strung out into the sea. A “key” is a sand island on the remains of a coral reef and they are all over the world, sometimes spelled “cay” or “caye” but still pronounced “kee”. Here we have Longboat Key, Lido Key, Siesta Key, Manasota Key, etc. For all I know these may be true “keys” but I always felt that this is just a bit of marketing. Then I read somewhere that old maps of this area named this island Sarasota Key, so maybe it's just tradition, what do I know?

Anyway, just off the shore of our “kee” is a sandbar that is really prominent at low tide. There's a deep channel between our beach and the sand bar making it accessible by boat only. Probably because of this, the locals turn the sandbar into the Redneck Yacht Club, strung together like a floatin' trailer park!  It looks pretty awesome – so much so that I would swim out there if it wasn't for the channel with all the (sometimes big) boats cruising through at high speed. I don't want to turn into chum, not too-day!

“Where are you from?” It was a simple question asked by the checker at Publix on the second day here. As much as we've talked about this, Deb and I didn't really have an answer, certainly not a short one! We always said we would tell people we are from “here”, wherever we happen to live at the time. But we'd been here less than a day, so that didn't seem right. “Where am I from?” I asked with a deer-in-the-headlights expression, eyes darting to Deb, whose eyes were darting to me. I was buying time for an answer I still didn't have. Deb said she thought about dropping the groceries and running for the door, but in moments, we were laughing as we tried to explain that we're a little from here, a little from there. “You looked bewildered”, he said as we talked of the Witness Protection Program and other non-explanations. “It's a simple question” he said, but it's not a simple answer. Yes, we're from Colorado, but we don't live there any more and we lived other places too, so are we from there? We are from Indialantic, FL and from McPherson, KS originally, so are we from there? Our permanent address is in Orlando, so are we from there? Our mailing address is Green Cove Springs, FL but I don't think we can say we're from there. Anyway, don't ask us where we're from, we don't really know.

We've been getting in a lot of beach time now that we found Pyle Point (see last post). It's better at low tide because there's more “beach” but it's still tons of fun any time. Sometimes we ride the trolley, but most days we bike there, it's only about 3 1/2 miles from our place so just a little bit of a workout to and fro. The hardest part is riding right by some of our favorite happy hour joints (happy hour is 2-6pm, 11am-6pm in some places!). Some days we ride by and wave, and some days the gravitational pull is just too much and we get sucked in. It's all about going with the flow, and seriously, can you really fight gravity?

We did have a visit from my brother and sister-in-law, Mark and Penny. We walked across the bridge, picked up the trolley and took it down to Pyle Point. We had a great day swimming, strolling, drinking beers, just owning the joint. It was good having some down time with them, at the beach and at the house too. 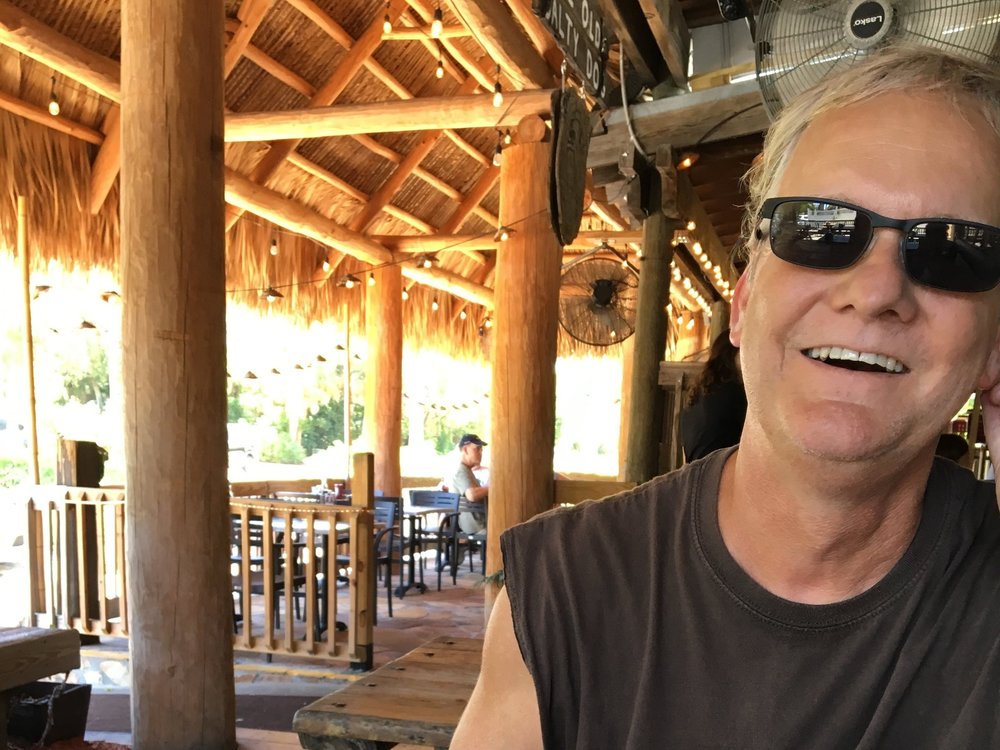 We also had some good luck at local restaurants, with some very fresh Cobia at one and Mahi-Mahi at the other. We've been shying away from Grouper lately. We had our share of not-so-fresh Grouper the last couple of trips to FL. When someone calls it “fishy” what they really mean is it smells like the wind blowing off the docks = “stinky dead fish”. I think some of these places take the concept of “fresh fish” a little too far (they really mean “not frozen”). But it's not really fresh if it's 3 days old now, is it? IOW, you should have frozen it when it was fresh! In any case, we've done well listening to the hard-working waitstaff in the places we've tried here.

We actually cook the vast majority of our meals - we love to cook and the food is always healthier, and almost always better tasting than eating out (with a few notable exceptions). If I do say so myself, and apparently I do, I can cook a filet of fish. There's a fine line between “still pink in the middle” and “fish jerky”, but if you stay on top of it the results are spectacular - we've had some delicious home-cooked Mahi and Halibut dinners in the last several days. It's also a goal of mine, within the overall retirement spending plan (which we'll get into in a future post), to not spend more on food and drink out than we do on eating at home. So, we shop, we cook, we clean, and we enjoy the heck out of it.

That's it for now, do something fun today, we will!