What a trip! To start, we STILL had trouble with the packing! I kept saying I couldn't believe how hard it was. Being a rookie at this “flying with checked bags” thing (I'm a carry-on only kind of guy), I missed some critical info on American Airlines website, and it was staring me right in the face. I focused in on the weight restriction (70 lbs in the U.S., but only 50 lbs in the Caribbean and Central America). So we were working so hard on the weight, we (I) didn't notice the size (L+W+H) restriction on our large rolling duffels. They are too big to fly in this part of the world, unless they are cinched down to half their full capacity. We bought these bags (Eddie Bauer XL size) many months ago, knowing we'd have to put “everything” in them, but not really knowing the rules. So, bottom line we cinched them down (and good thing we did, more on that later)! But we knew we could have more bags, so we added two smaller duffel bags to take some of that cast-off. Finally, we were ready to fly! 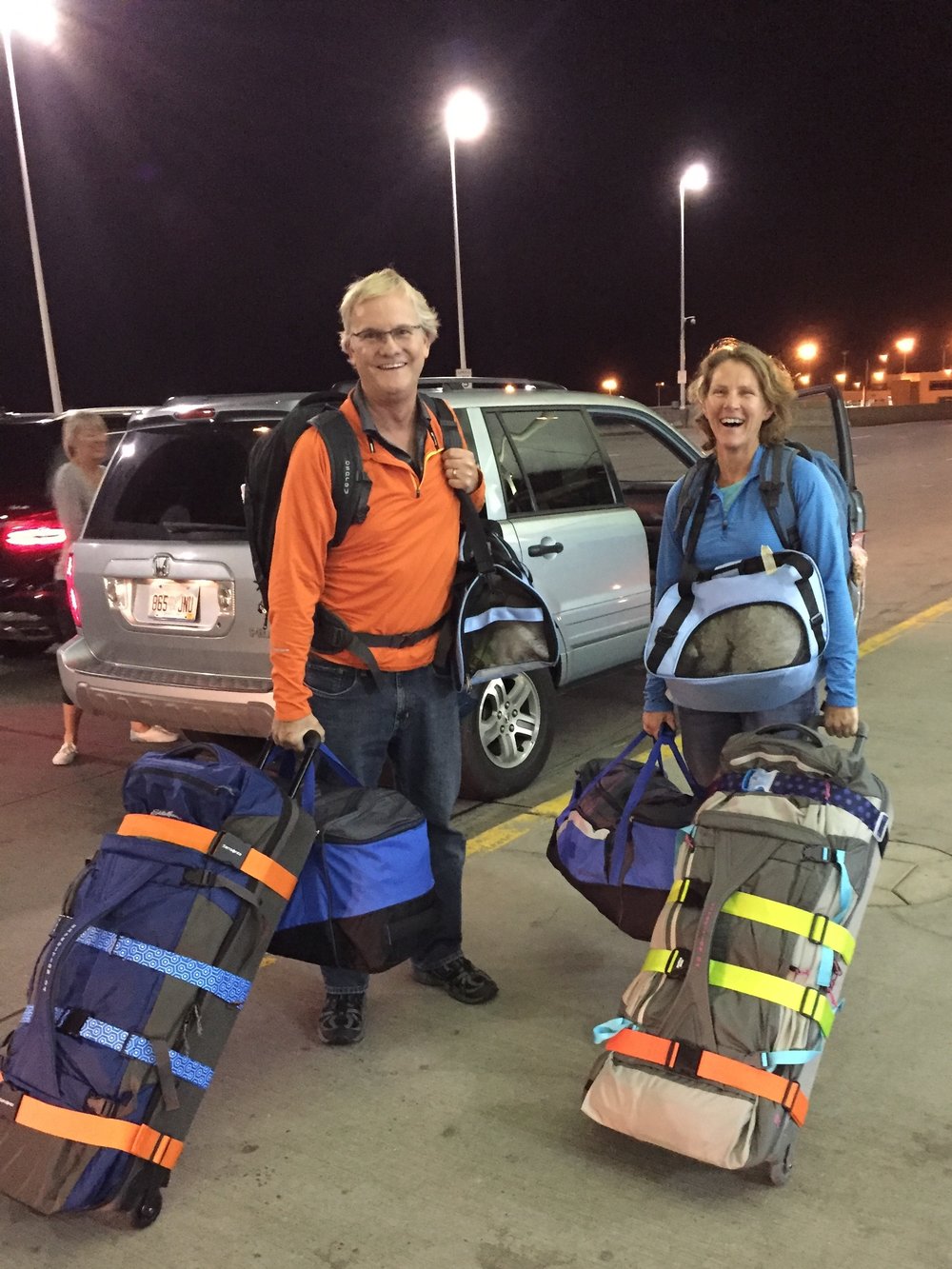 I was stressed until American Airlines accepted our bags (they didn't even check the size, but they did check the weight). We had already said our goodbyes to close friends and Deb's Dad, and got dropped off by our good friends Mark and Maureen at Denver International Airport. The flight was at 11:59 p.m., with arrival in Miami at 5:50 a.m. I told Deb “we'll be lucky to get 5 hours sleep”, which of course neglected the time zone change. So we were lucky to get 3 hours of sleep, but it went really well. The dogs traveled like champs, with only a little whining here and there during transitions (Maxwell!).

We had 5 hours layover in Miami so we just took everything at a slow pace. Found our gate, bathroom breaks for all including 2 stops in the dog relief area, got the dogs some water, let them walk around a lot, got some breakfast, got some Cuban coffee (Café Cubano - yum!), found our new gate in another terminal, and managed to kill 5 hours without it being bad at all. Then, it was off to Honduras, yay!

This was where Deb confessed her stress, she was worried about having all the papers in order for immigration, the dog health certifications, etc. I knew she had done a great job with all that so I wasn't concerned. A couple hours later, we touched down in Roatan, which is a much larger island than our tiny little Utila. First it was immigration, and while standing in that line we met a friendly young lady named Laura who was also going to Utila. Her itinerary was different though. Since the Roatan-Utila ferry didn't run that day, she was going by ferry over to La Ceiba on the mainland, and then another ferry back out to Utila. She had at least 4 hours of boredom ahead. We told her about our charter plane, made it sound grand (what did we know?), so we all decided to see if she could join us and share the cost.

We all got our passports stamped, etc. and then went to get our bags - this was all in the same big room. Our instructions were to meet our pilot, Captain Selim at the coffee shop, but next thing you know, there he was. Deb was working with some official dude to get our pet import permit while I was talking with the Captain about adding Laura. The pets took about 20 minutes and everything went fine - Deb was relieved, but the Capt. was very hesitant about our plan, not about the added weight, but because of the size and number of all of our bags. Laura was reasonably packed, with one large bag and a smaller backpack. We on the other hands had 6 bags, and none of them small! First he said no, and I told her the bad news. I checked on Deb & the pups, and turned around to see Laura and Selim talking. He said that if she could put her bag on her lap for the flight he could make it work (but the look on his face said he wasn't sure). You've never seen a more comical sight – him stuffing our bags in the back of that 80's era Cessna 4-seater, some in the side, some in the passenger compartment behind the rear seats, and then the last ones reserved for our laps! 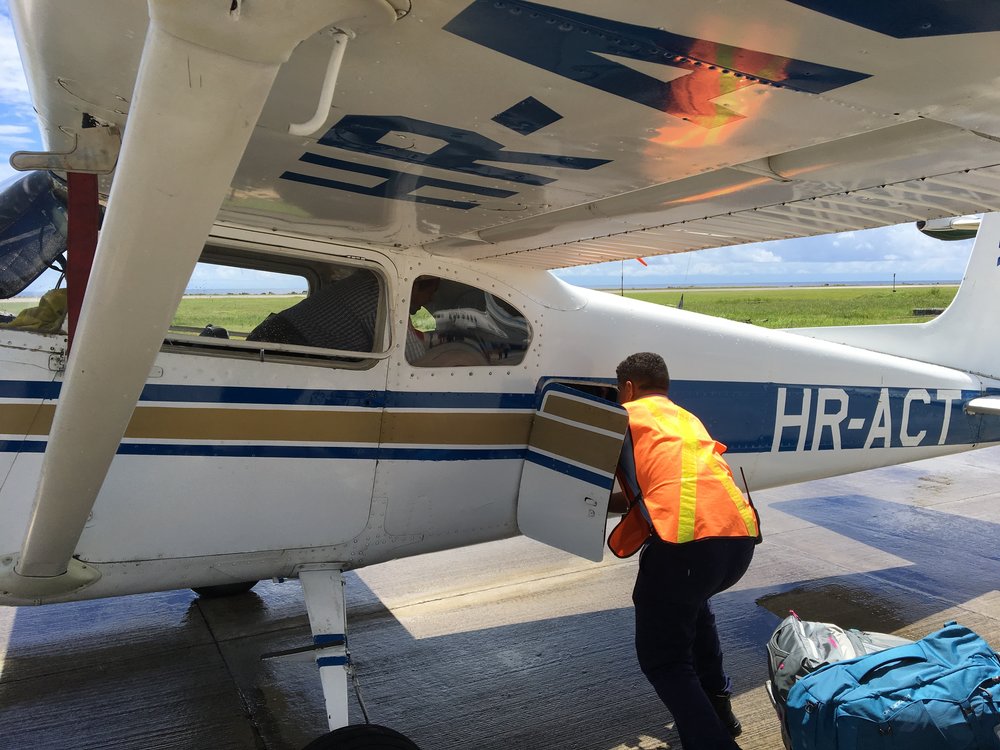 Push! Captain is inside pushing with the baggage handler helping on the outside. No way this works with our XL bags maxed out.

I got to ride in the right seat up front with Kirby in my lap (in his pet carrier bag). Deb behind me with a backpack on her lap and Maxwell (in his bag) on top of that. Laura was behind the pilot with some bag (there were so many I don't remember what went where) on her lap, and finally Capt. Selim squeezed in to the important seat. He got clearance for take-off on his cell phone, and off we went down the runway. With all that weight, I admit to being a little stressed, especially when he pulled up to about 10 feet off the runway and just stayed there for a couple hundred feet. I could see the brush at the end of the runway and it was much taller than 10 feet! But he pulled it on up and out over the Caribbean Sea (these islands are in a semi-protected area between the land mass of Honduras and the Yucatan peninsula to the north). In a minute or so, we were seeing sights we'd only been dreaming of, a birds-eye view of the Meso-American reef, blue-green water, isolated thunderstorms around, and then I could see where we were going – Utila ho!

Keep a good grip on that Jesus strap - that should help in a crash!

But to get there, we needed to survive the journey and that meant keeping Kirby out of the way of the Captain as he trimmed his fuel mixture, adjusted the flaps, and did all the manual things that you do in old planes – the things that more modern planes do for you. I was also making sure to keep from extending my legs and accidentally pushing some pedals which I didn't know how to work! I handed Deb my phone and she got many of the pictures you see. At one point, I turned and gave Laura a high-five – this was happening and we were all loving it! Great adventure starts when you let go of your fears and try something new, and she was doing just that. I was very impressed with her – she was coming to dive school in a new country alone, meeting cool people 🙂 and now taking off in a flying sardine can! I was less impressed with the guy in my seat; I had to keep reminding myself during the 20 minute flight to loosen my grip on the “Jesus strap”!

But good old Captain Selim took us right down that semi-paved landing strip and to the Utila airport, which consisted of a shack that nobody went in or out of. Morgan's Travel had arranged for transportation for us, which was yet another experience. We got to ride in a 3-wheel tuk-tuk with bags under, over, and all around us once again. In fact, they didn't all fit but Mr. Morgan had a small pickup truck there so a few went in the back and Laura rode in the front. Down the road we went, while we figured out where we were going. I was fortunate to recognize the place from pictures as we sped down the road or we'd still be wandering around the island! Laura's place was down the street so we went our separate ways at that point.

We can make it fit! 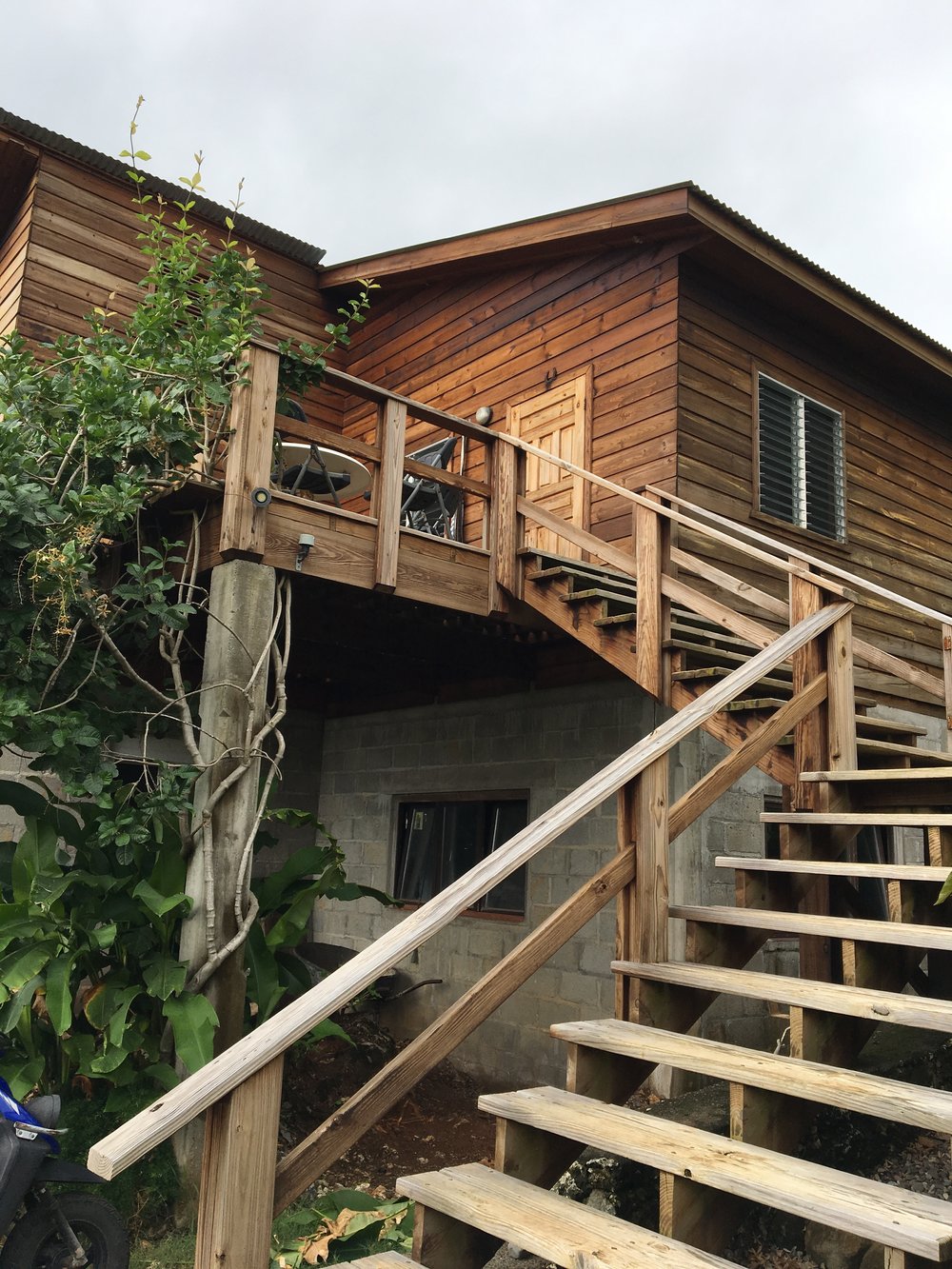 What a ride! What a great trip! We arrived at our 2BR apartment (right) after 13 hours of travel. The place is perfect - simple, has all the basics, good location, and great hosts Mr. Pride and Ms. Luzzia.

Stay tuned for our early impressions of Utila, Honduras (which I now know I've been mis-pronouncing). I always figured it was a very Spanish pronunciation “Oo-tee-lah”. It is actually much closer to an English pronunciation (who knew? Not me). Mr. Pride, a native Utilian, says “You-till-ah”. Something like that – anyway store this away for your trip here. You are going to want to come!

TODAY'S SPECIAL:  Kokomo by the Beach Boys, cuz we got away from it all!

And please, all you experienced travelers, fill us in on the ways of traveling with lots of bags!  We are rookies at this.