(WARNING: MANY PHOTOS AHEAD!)

The State of Florida has miles and miles of beaches. In fact, it has over 600 miles of beaches. As much as we'd like to explore them all, and as much as we like walking beaches, well, that's a lot of walking! Miles and miles of walking, but maybe we'll get there with enough persistence. You all know how to eat an elephant, right? That's right, one bite at a time - yum! So let's eat! 🙂

In this post we want to focus on the beaches of central and south Brevard County, where we are now on the east coast of Florida. Brevard County contains a 65-mile stretch of coastal land that spans from north of Cape Canaveral down to Sebastian Inlet, a century old man-made cut through the barrier island (which was an interesting struggle to complete). It also covers the expanse of water known as the Indian River Lagoon, so there's almost as much water here as there is land.

As we've discussed before, much of the coastline of Florida consists of barrier islands. I think of them as million-year-old sandbars.

Around the whole state, they are almost all accessed by car via causeways, although the rare small island may have an equally small ferry. 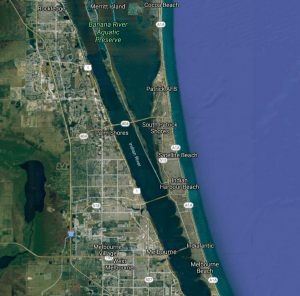 The section we've been exploring for the last several weeks is about 35 miles long, from Cocoa Beach on the north side all the way down to the inlet. It's part of the area collectively known as the Space Coast, due to the regular rocket launches. There was a launch a couple of weeks ago that we saw from the sand right near our rental house. There was the ignition/blast-off, the deployment of the satellite, and the return of the first stage back to the cape for a vertical landing! It was quite an upgrade from the I Dream of Jeannie days when I grew up in this area. Back then, the booster stages were simply dropped into the ocean to be left on the ocean floor (although some recovery of the old rocket engines has been done in recent years). I always imagined some surprised guys on a fishing boat out there in the ocean when this raging inferno of rocket engine "splashes down!".

Speaking of I Dream of Jeannie, let's talk about Cocoa Beach where that show was filmed back in the 1960's. There's an I Dream of Jeannie Lane, part of a large city beach park there. They still have fun in CB with that old TV show, sometimes hosting Jeannie lookalike contests and such. But as always we're here for the beaches, and for us that starts at the Cocoa Beach Pier. The pier has a few bars and restaurants, a gift shop, a fishing area, and a great little tiki bar out at the tip. 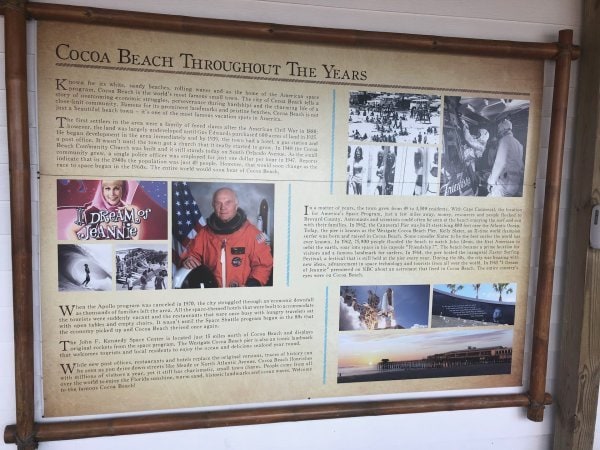 Cocoa Beach actually reminds us of the many beaches of southern California, with the lifeguards in their stands, their all-terrain vehicles, people with their umbrellas all lined up, and lots of action everywhere. We had lunch at that tiki bar on the end of the pier (of course!) and really enjoyed watching surfers left and right - some good, some bad, all better than me. The beach itself is very deep, which means there is a lot of sand between the dunes and the water, so you can really do a lot of things and put a lot of people there. In the pre-Corona-virus days, festivals and events were big, and that includes surf contests. I expect they'll be big again soon. 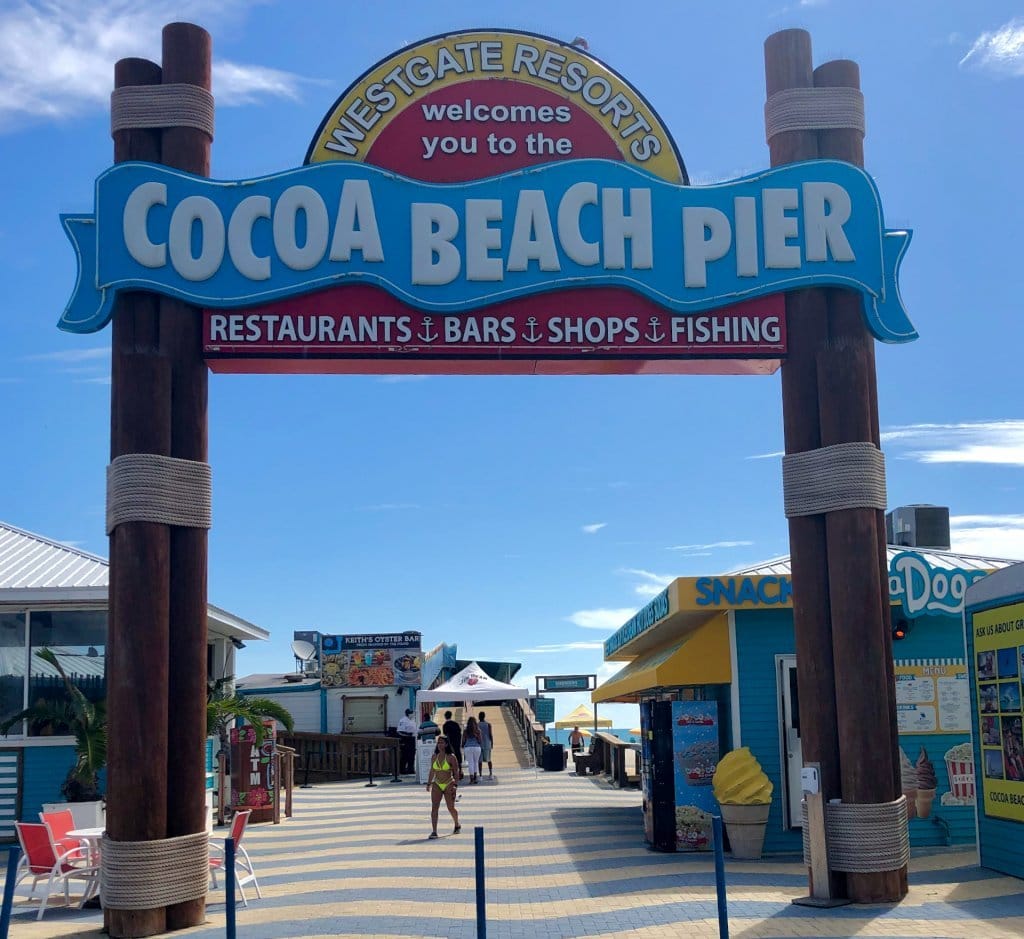 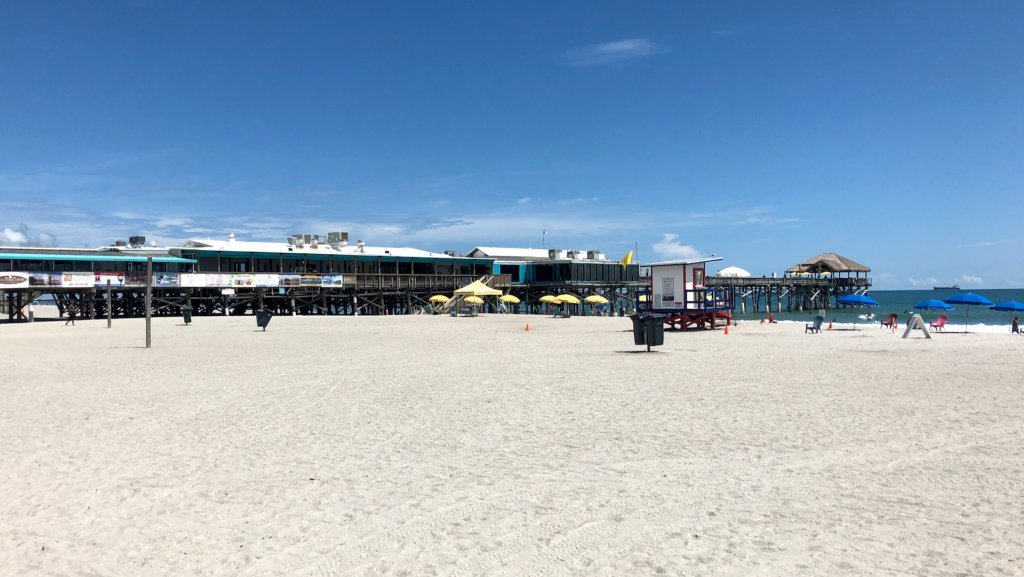 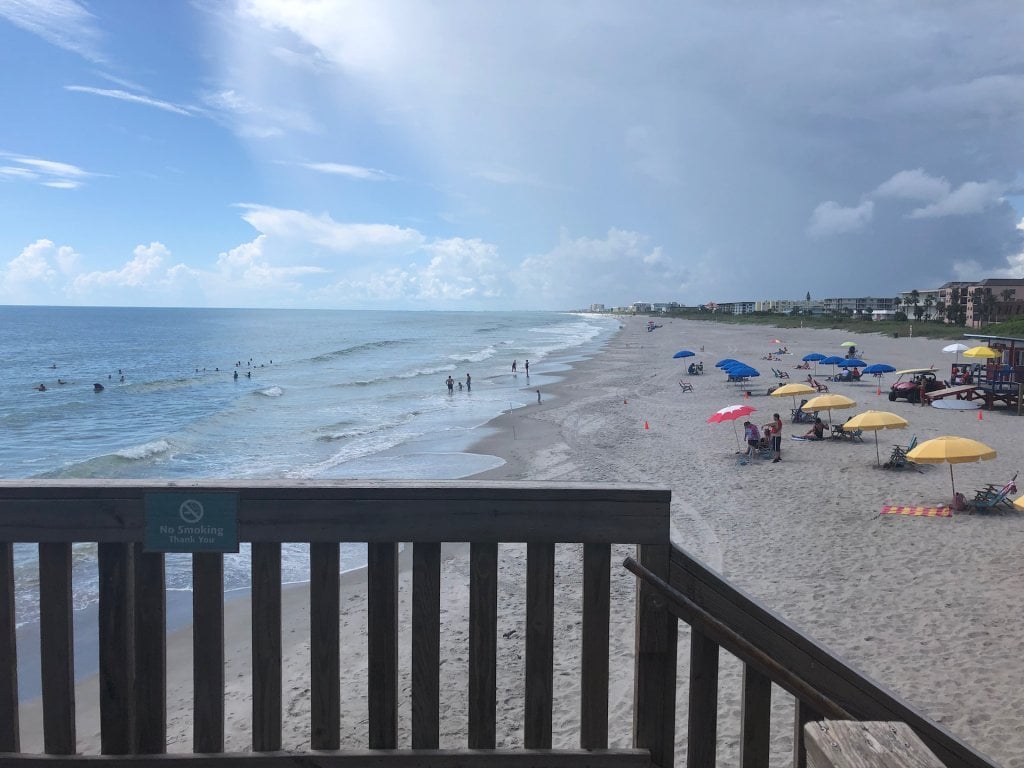 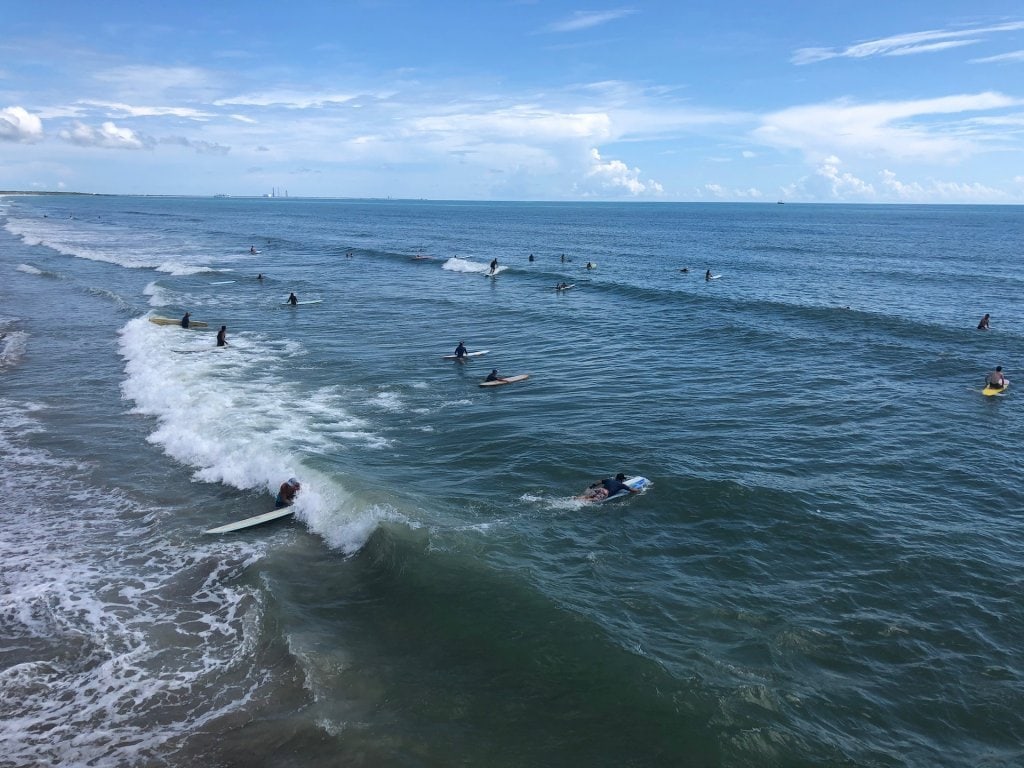 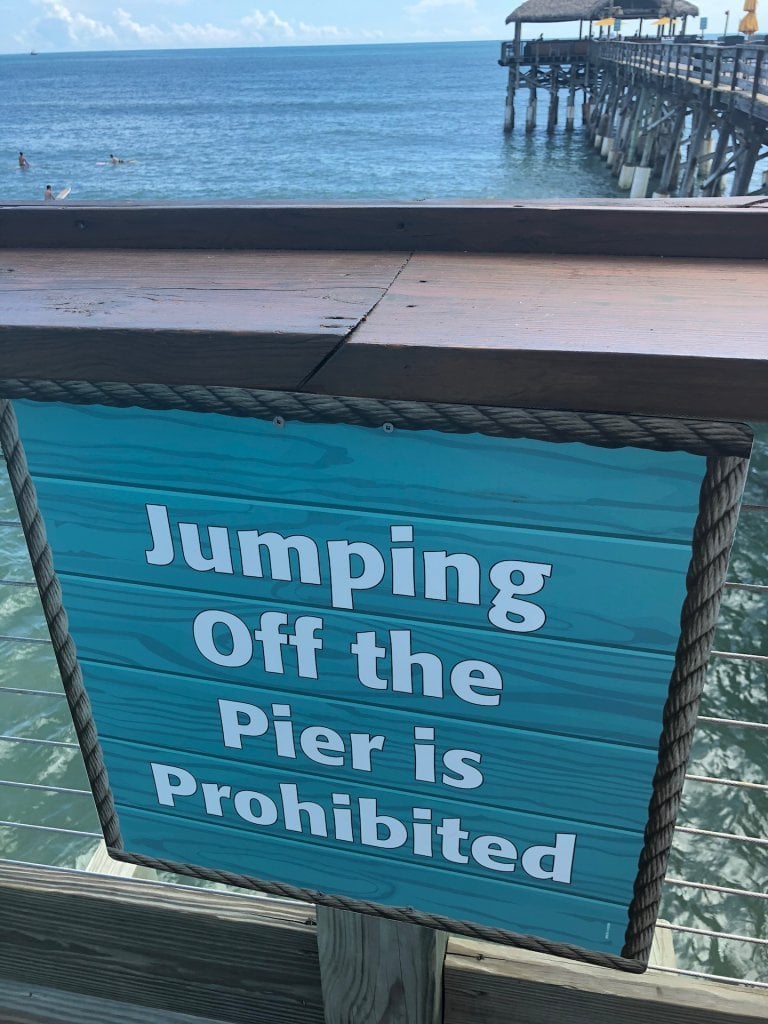 Wasn't planning on it! 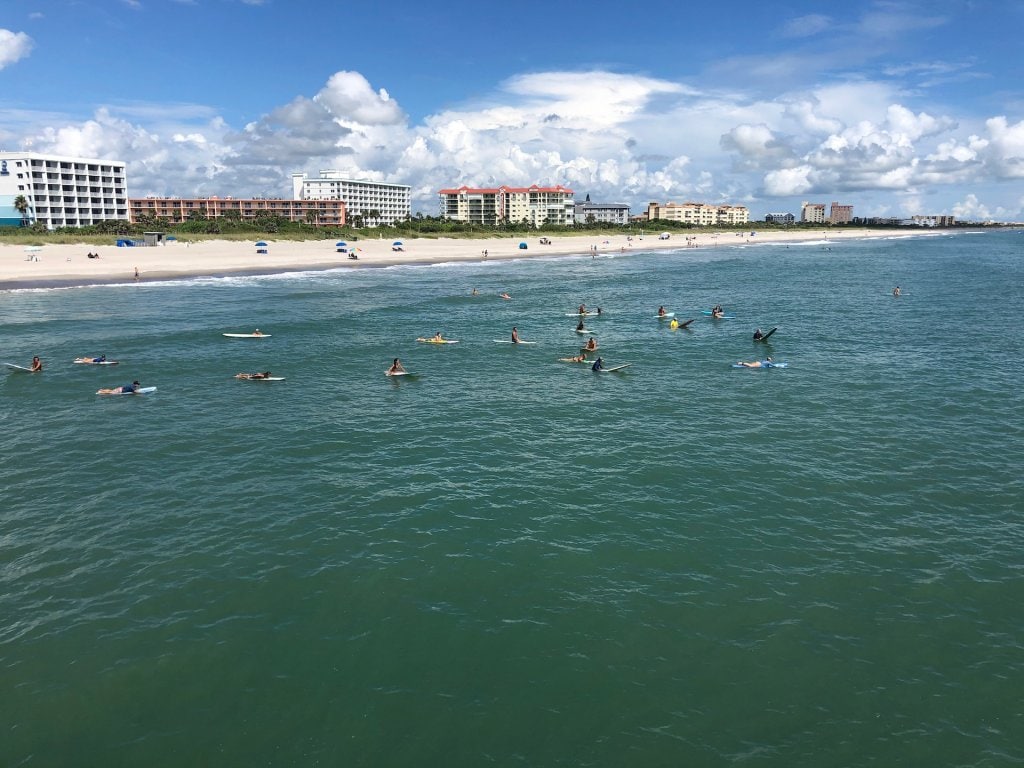 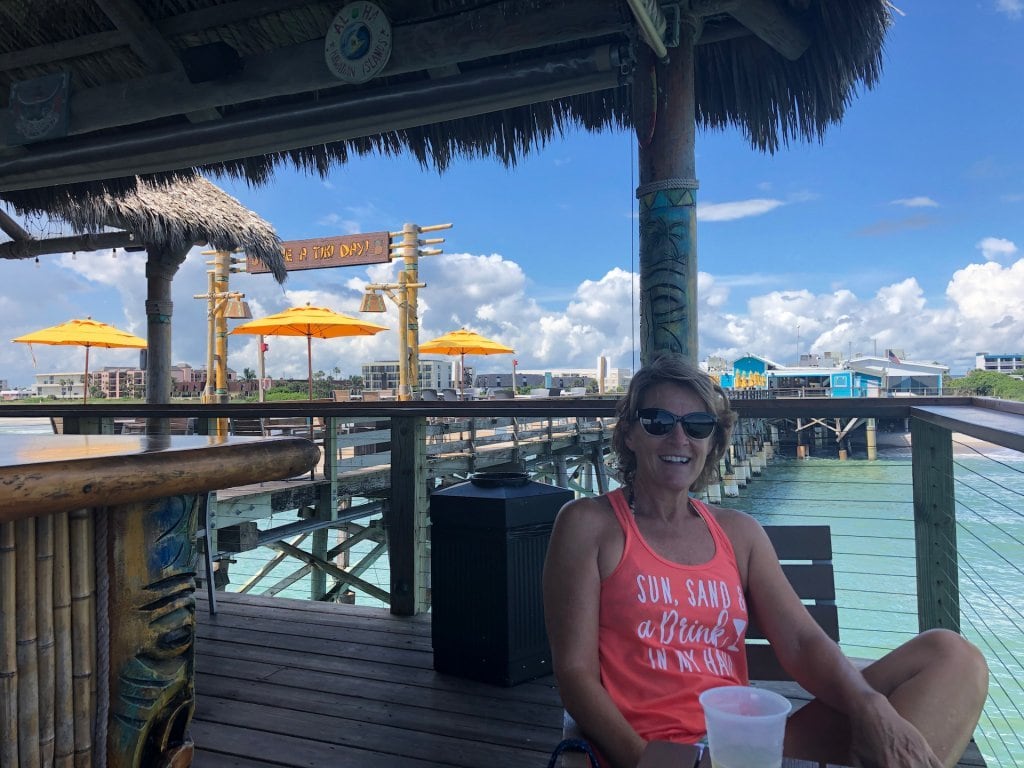 Cocoa Beach also has several east-west roads that dead-end at a beach crossover, and though they usually have metered parking spaces, it's not an issue for locals because they would just walk down or ride bikes. There are also some nice beach parks with free parking and nice beach access with lifeguards, showers, and restrooms.

Heading south from Cocoa Beach the first thing you run into is Patrick Air Force Base. They do Air Force training there, which is similar but completely different from "Army training, sir"! But mostly they manage the space operations out of Cape Canaveral (all those rocket launches). In fact, the base is slated to be renamed Patrick Space Force Base at some point in the future. There are surf spots along the beach there and it's all open to the public through the beach parks.

Heading south again down the island, you'll reach Satellite Beach, Indian Harbor Beach, Indialantic, and Melbourne Beach, in that order (see the satellite image above). They are all semi-sleepy little beach towns, none more than about 10,000 people, and some as few as 3000. They are generally only about 1-3 miles long north to south, and span across the island from the lagoon to the ocean. Satellite Beach was named after, well, you can guess the theme around here, especially when you realize that the area code is 3-2-1... The names of the other three towns are pretty self-explanatory.

Beach access is excellent all through this area, with many beach parks (free parking, restrooms, showers) and many other less noticeable beach access paths for locals to just walk down to the sand. Our rental house is only 100 yards from the beach so we do that several times a week at dawn, to watch the sun rise over the ocean and get in a nice 2 mile walk - it's a great way to start the day. Morning or afternoon, we love to walk and walk these beaches. 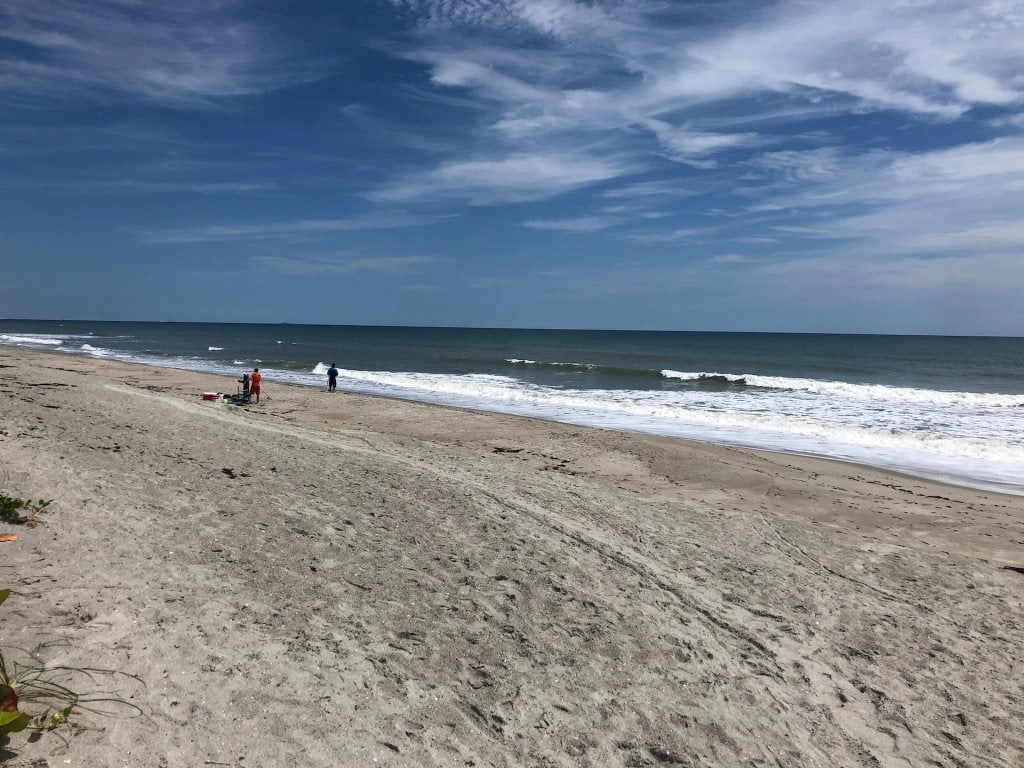 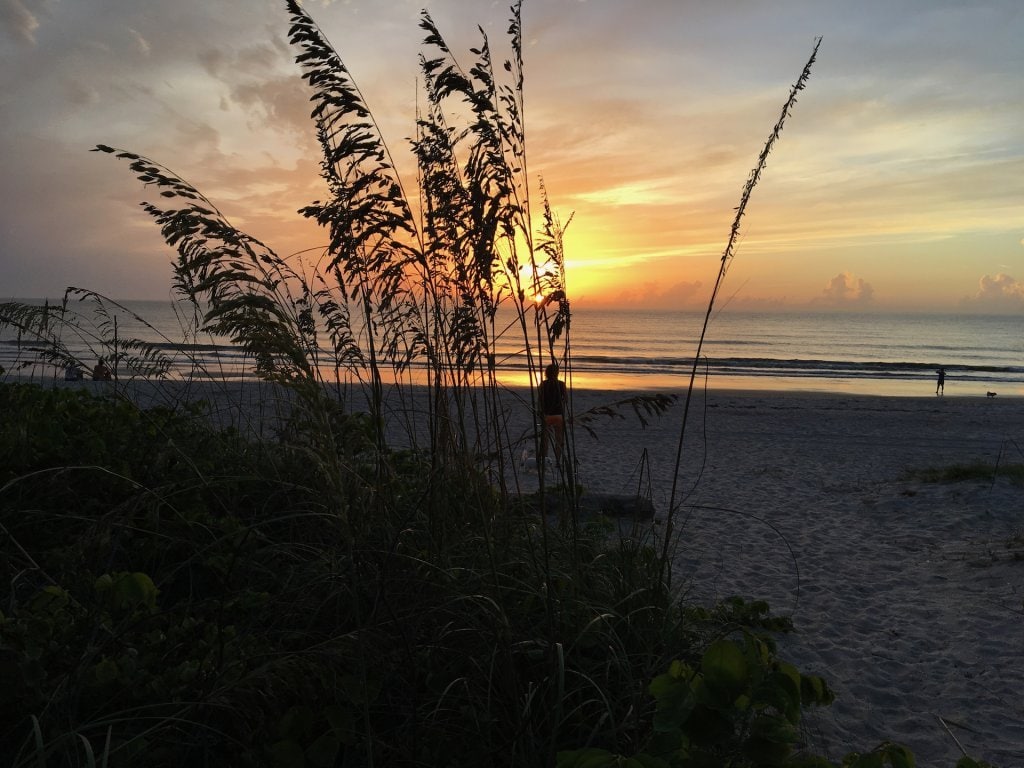 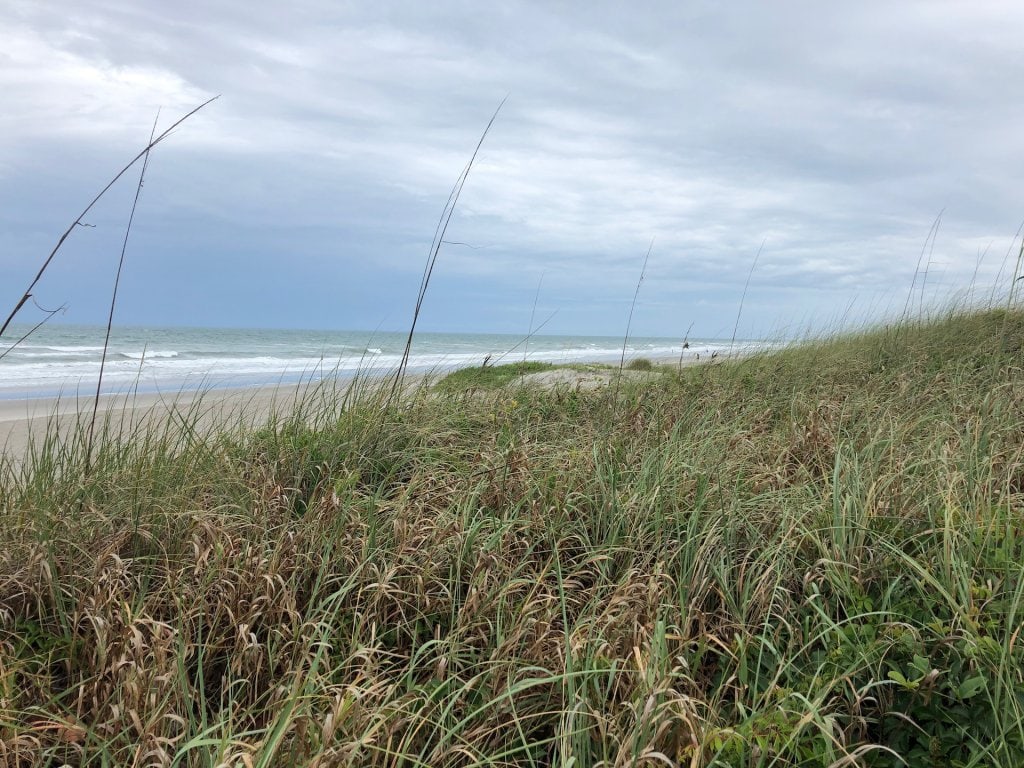 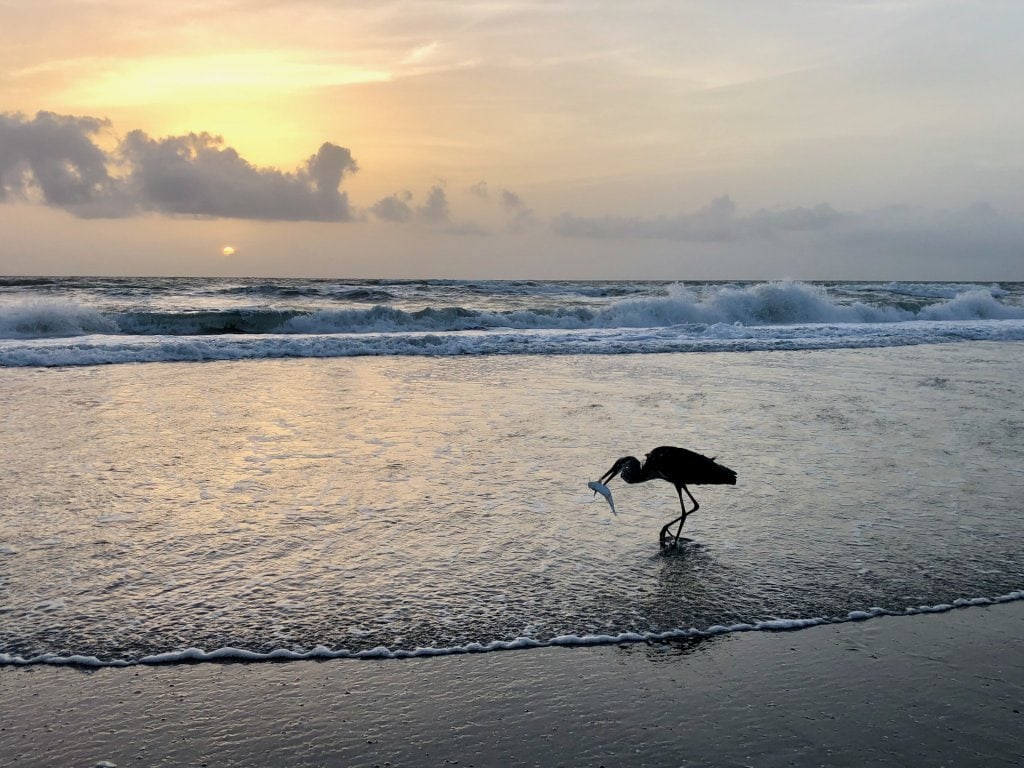 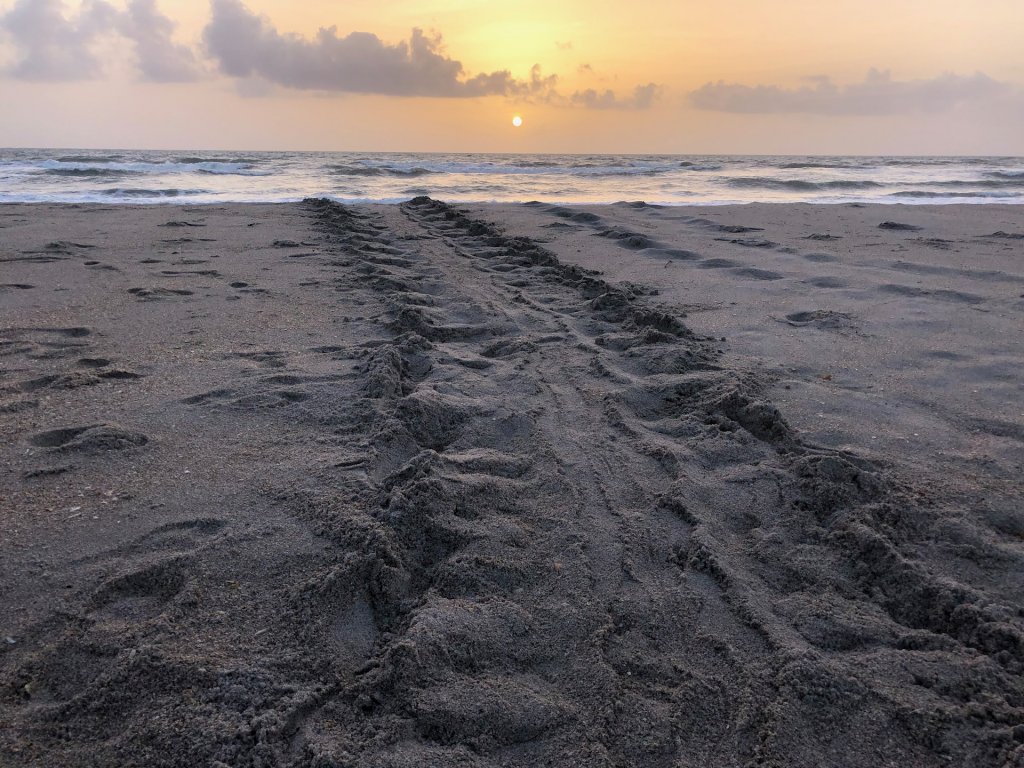 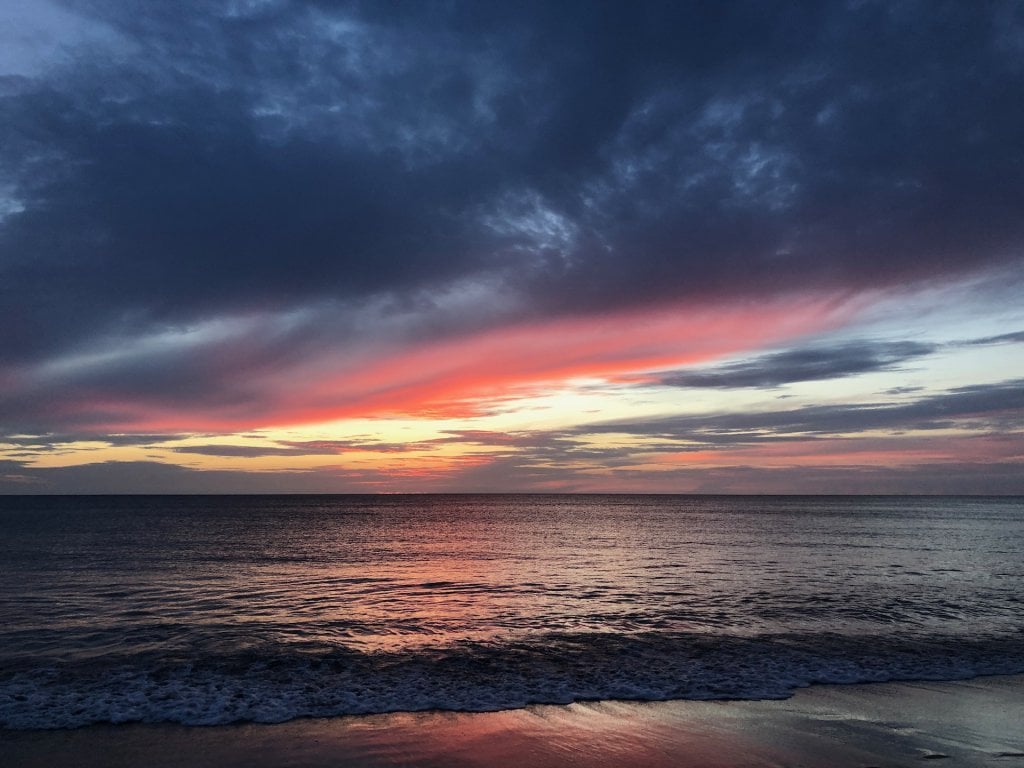 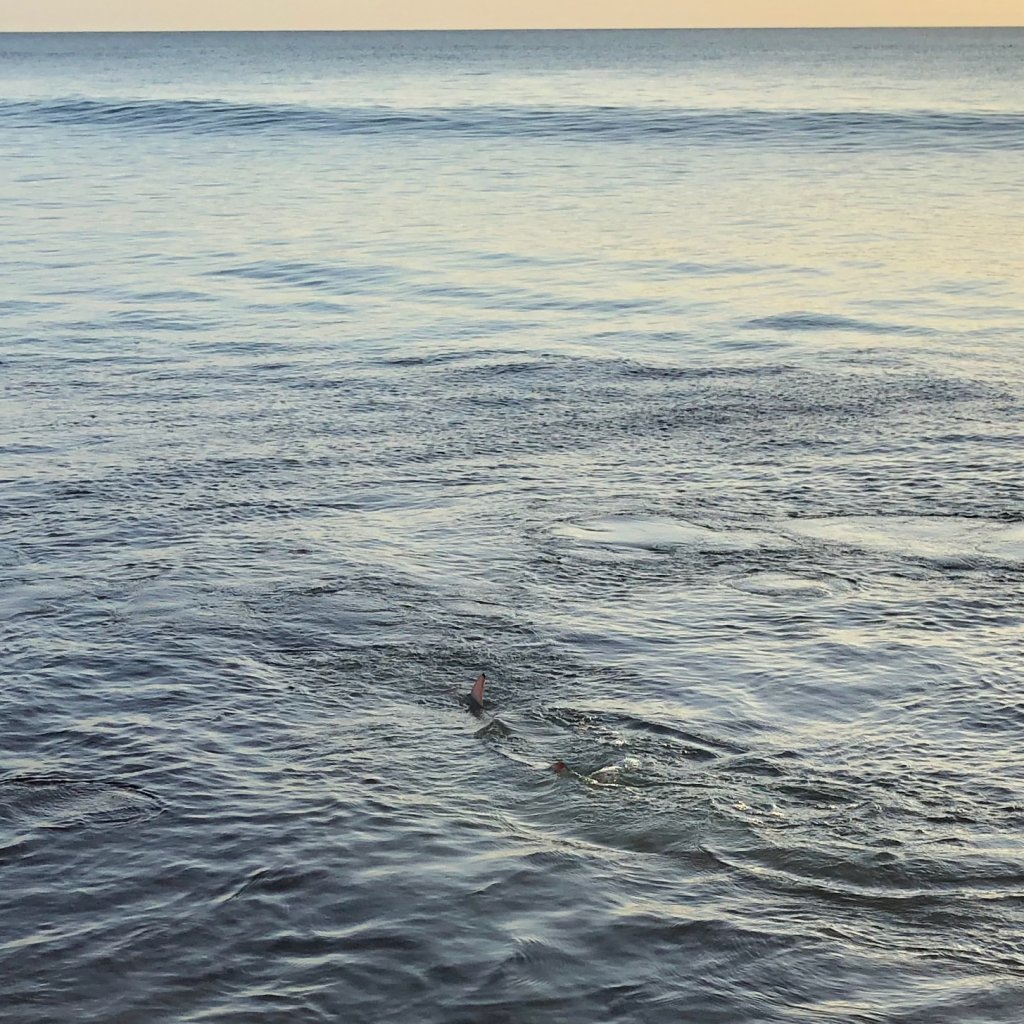 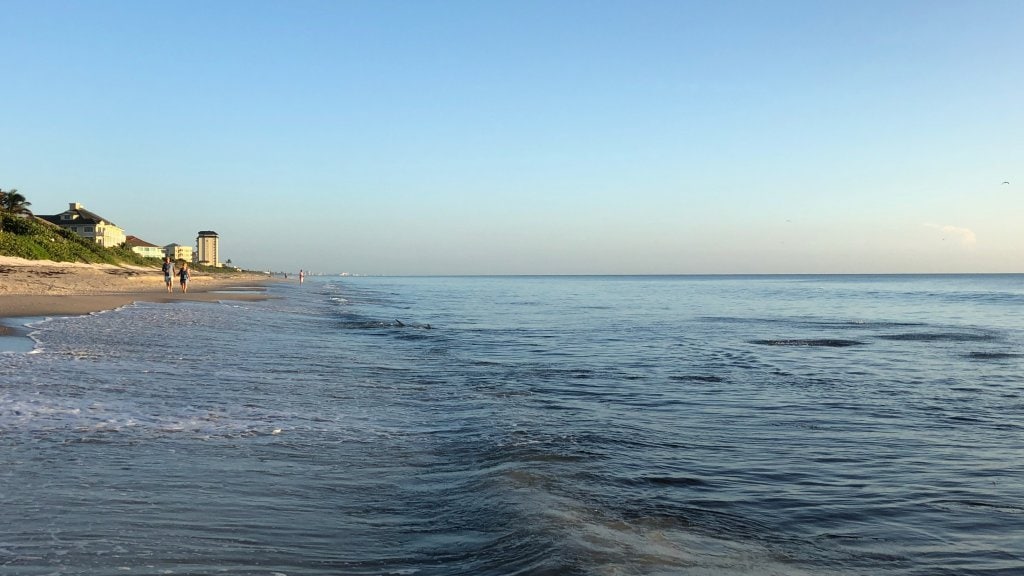 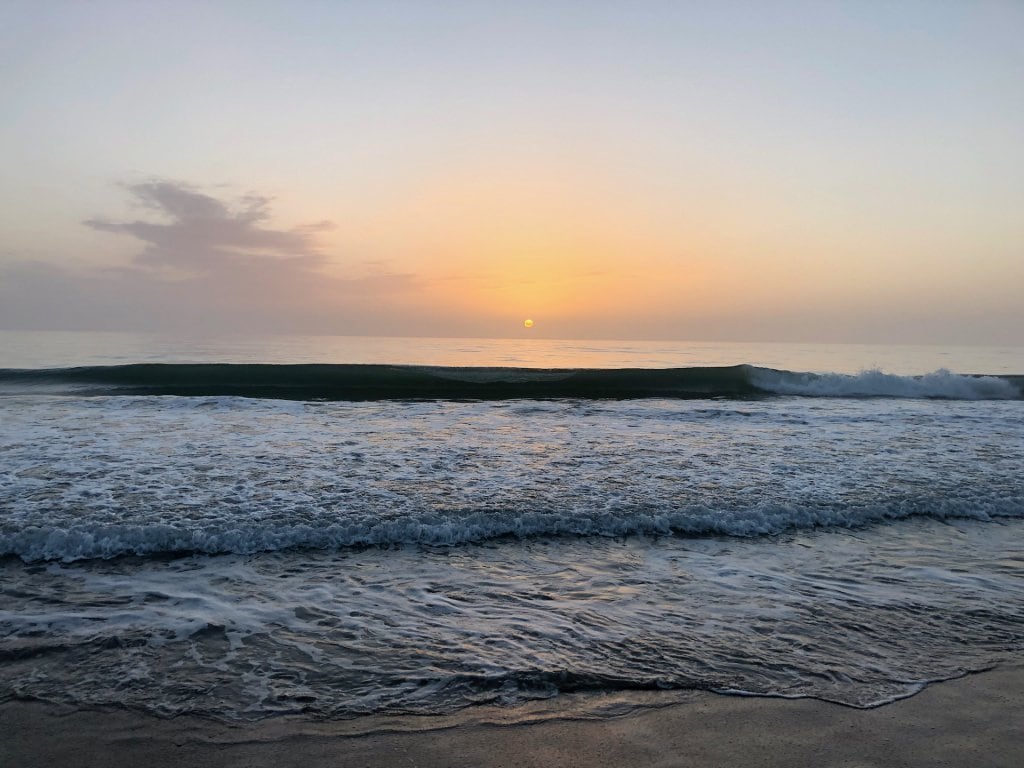 The beaches in these towns are fairly similar, but having grown up in the area, I can tell you that the locals know the differences that matter to them. All of them have good surf spots on the right days and surfers will sometimes travel up and down the coast if a particular beach cam shows a better break somewhere else. Those same places can also have good calm water for paddleboarding or kayaking on other days. There is a lot of surf fishing on this part of the coastline as well as swimming, body surfing, skim-boarding, snorkeling, and of course, beachcombing and sunbathing. These are great beaches if for no other reason than the variety of what you can do on them, and I didn't even mention the people we've seen surfing on stand-up paddleboards (I need to do this!), windsurfers, and kite-surfers (I don't need to do this!).

Beyond Melbourne Beach toward the south is an unincorporated area commonly known as South Melbourne Beach, and beyond that, Melbourne Shores, Floridana Beach, and Sunnyland Beach, which are "unincorporated communities". They take "sleepy" to new levels down there, with few people and very few restaurants and shops, most of which sell bait and tackle. 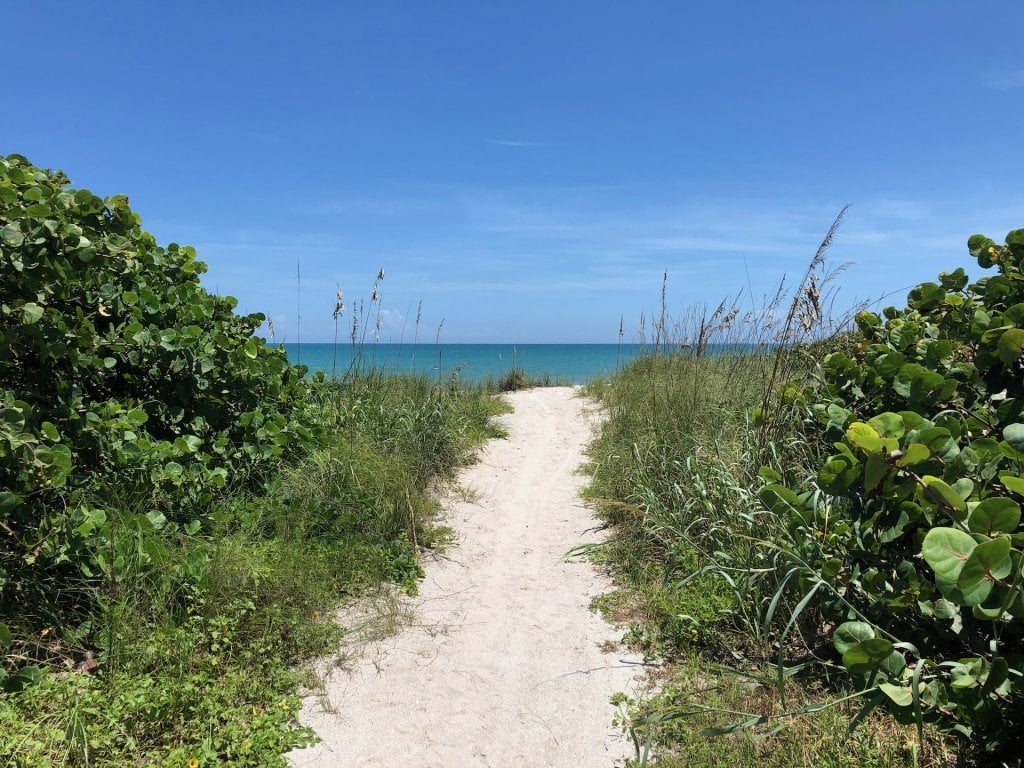 Out in the middle of nowhere... 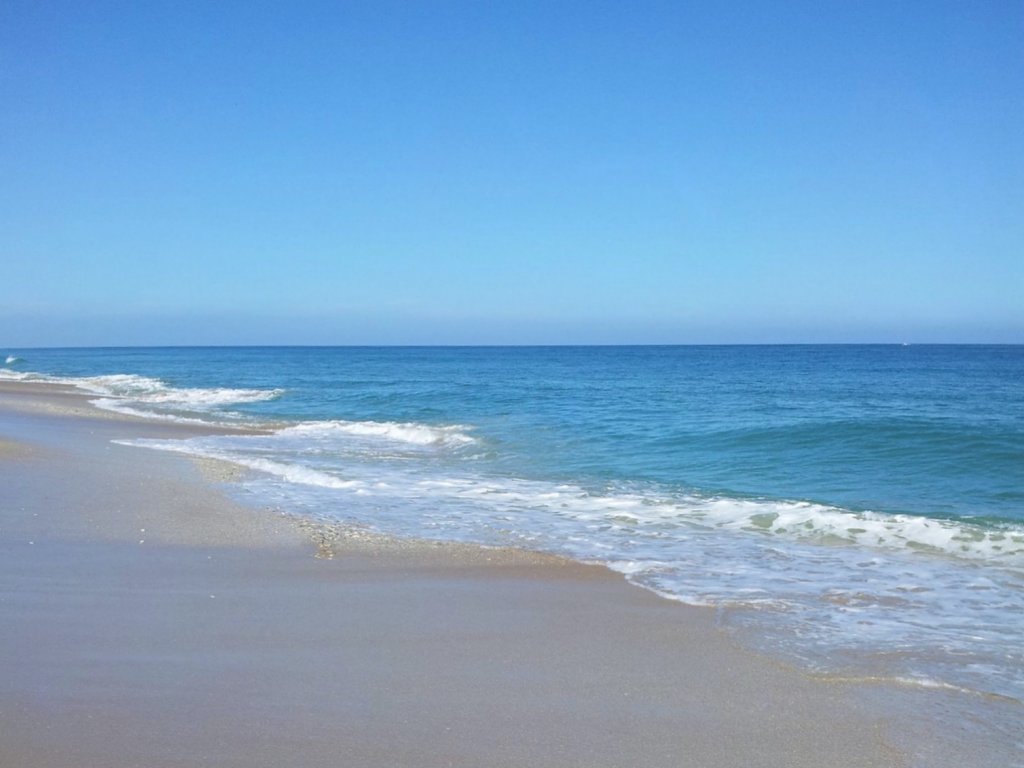 In the summer, the entire coastline has sea turtle nests, as the females come ashore at night to lay their eggs. Because artificial lights can confuse the turtles, the simple rule in the summer is "lights out for turtles", although some beachfront residents don't always follow it. The turtles number in the thousands up and down the coast, coming in nightly for an extended period. Then, the hatchlings number in the hundreds of thousands I expect, once they get to hatching. It's one of the cutest sights you can see, as the little turtles struggle over the warm sand dunes to get to the cool refreshing ocean. Then they get beat up in the waves a little bit because they are only 2" long, but eventually make it out to sea. We always wish them well, knowing the odds are stacked against them with all the hungry sea creatures and birds out there. But some will make it, and the females will eventually return to the same beach from whence they came, yay! Swim little turtles, swim! 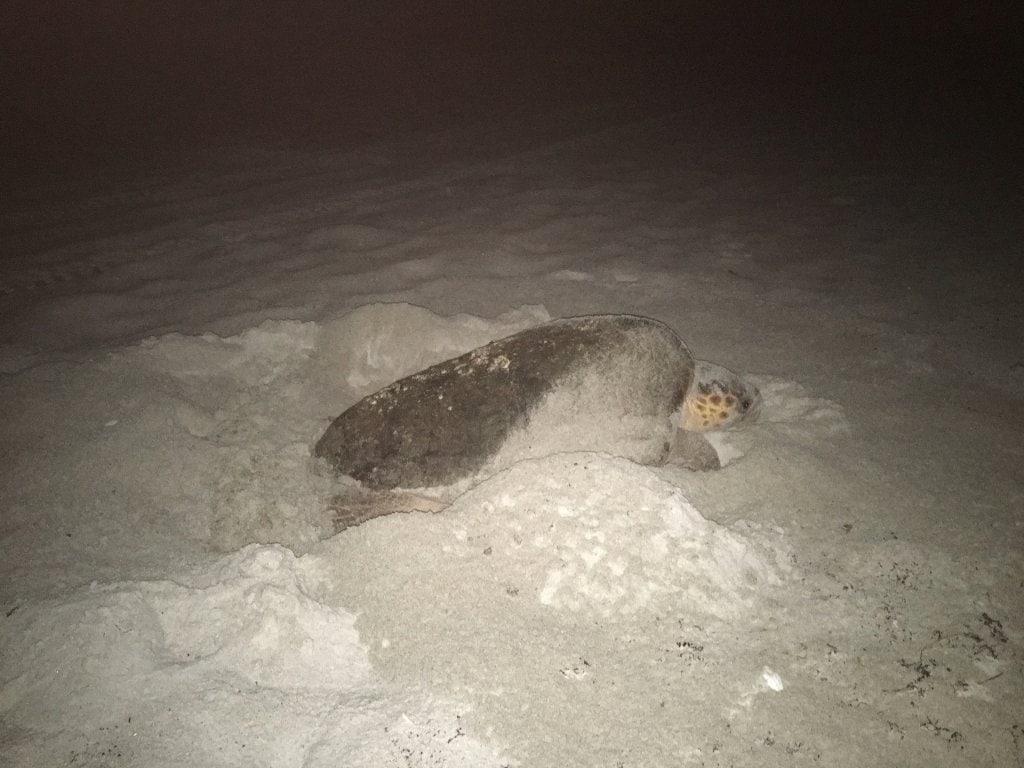 We've also seen sharks and snook in the shallows feeding on bait fish (in one of the pix above you can see a blacktip shark's fin), and dolphins out in a little deeper water. The shore birds feast on fish in the mornings too, it's a nice sight to see. Even the Littles, our little dogs Kirby and Maxwell, have a new favorite beach where shallow tidal pools form at low-ish tide. On a flat day it doesn't matter, but here they can dip in the water even on a big wave day.

Finally, when you get down near Sebastian Inlet, the water just seems to change to such a beautiful blue color! I suppose it's because the sand is whiter in that area for some odd reason, but we don't care, we just enjoy the views. We love driving down there, 15 minutes or so, walking down a sandy trail, and finding some beautiful beach virtually all to ourselves!

Right by the inlet itself is some great surfing, on each side of the cut. By the jetty on the north side, is the classic Sebastian wedge, as the waves reflect off the jetty. On the south side, about 1/3 mile out, there is a sandbar and surfbreak called Monster Hole. On the right day, it is a monster and should only be attempted by highly skilled surfers! 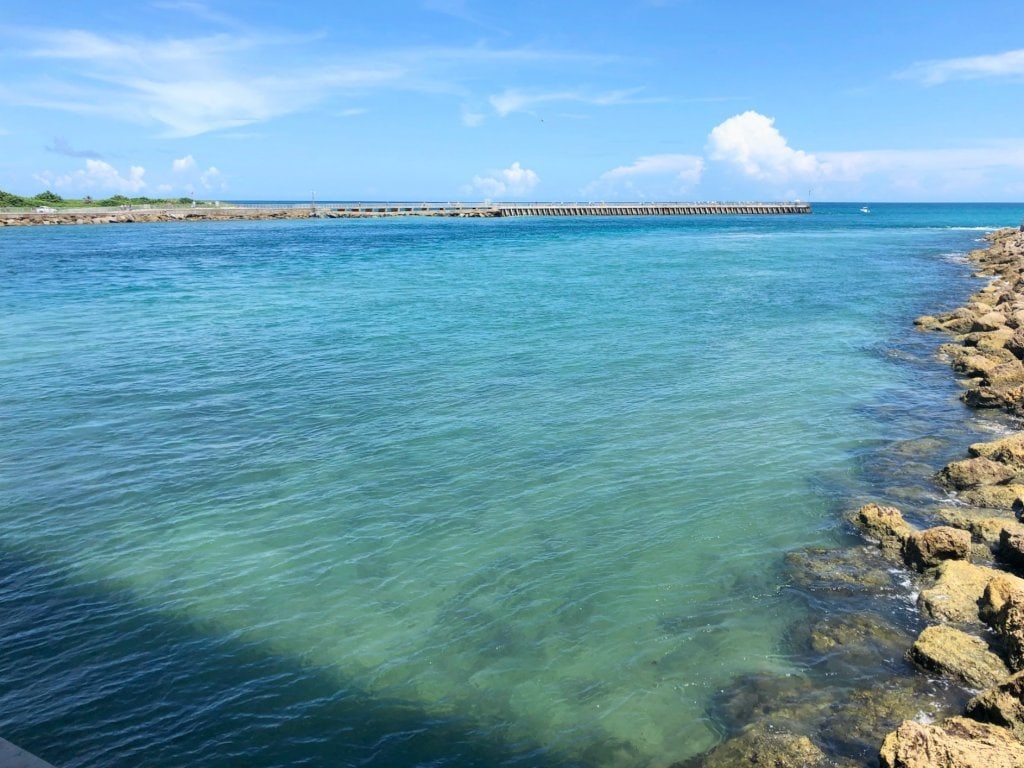 The Inlet, looking toward the Atlantic

For us, this part of Florida and these beaches have become the standard for others to beat. There is such a great beach vibe in this area, and it's really unique in its own right compared to those other 565 miles of Florida beaches. 😉 You constantly see people, young and old, walk down the street with no shirt / no shoes, surfboard in hand onto the sand. We love that!

BTW, Deb has drawn a line just north of Orlando, and above that she's proclaimed the world to be "too cold!". She looked at tables of average temperatures in the winter, finding some low temps that begin with a 4, for only a couple of months, but that was the limit! So even though we will be staying south of that line, I suppose we could still venture to the far north of Florida in the summertime when it's warm. 🙂

TODAY'S SPECIAL: "The Boys of Summer", by Don Henley. "Nobody on the road, nobody on the beach... I can see you, your brown skin shining in the sun. You got the top pulled down and the radio on, baby." Oh, to drive a convertible again!

Posted in Beaches
← Hurry Up and WaitThe Love Shack →