Hurricanes can't read a calendar. But we can, and it tells us that on June 1 the 2018 Hurricane Season starts (and it goes to November 30). The National Hurricane Center (NHC) sets these official dates as the most likely times for hurricanes to form, and it's all based on historical statistics. I'm sure they tend to be overly cautious because they want people prepared, and I'm OK with that. The season peaks in late-August through September as the difference between water and air temperature is the greatest then. But the statistics don't take into account the oddball years, like in 1908 when a hurricane formed on March 6! And there was a late December hurricane in 1954 that lasted all the way to January 6, 1955!

So here we are in late May prepping for the 2018 Hurricane Season, or the Zombie Apocalypse, it works for both. I started with a spreadsheet I found online that I imagine was put together by a Type A Mom with a whole lot of worries swirling around up in her head. She had things in this list like toilet paper and feminine hygiene products (as if you're going to run out of these!), aluminum foil, mop and buckets, paper towels, soap, mirror, toothpaste, every last item in the first aid kit, and other normal things that you simply have, you don't have to prepare ahead! She had 2 can openers in case one doesn't work! I can tell you, if I'm hungry I have about 7 ways to open a can, not including my teeth. Anyway, we took a machete to her list and came up with our own that is much easier to implement and still covers us very nicely.

I have to keep checking my language because I have a tendency to say “we're prepping for the hurricane”. I think I say it that way because to do this right, the mindset needs to be “when it happens, we will do this”, rather than making it some abstract idea that one day a storm may come.

That said, with the stress around this island after last year, the wording still needs to be “prepping for hurricane season”! Some people were even nervous earlier this week over the sub-tropical storm Alberto, which was at the time 1300 miles away in the Gulf of Mexico and moving farther away from us. Obviously, any storms are going to be a touchy subject for the next 6 months, but I've also heard others here with a fairly cavalier attitude about it all. We're somewhere in between, planning for the worst, hoping for the best, and not getting stressed about it. Of course if we're in the middle of a hurricane later this year the blood pressure will probably rise a bit, but we have a stout house and a good plan so we don't worry much - it just isn't worth it.

I've been through several of them in my lifetime, growing up on the east coast of Florida. Some of those were major storms (Category 3 or greater), starting with Donna a week before I was born in 1960. I even heard a rumor once that if I was born a girl, my name would have been Donna. But those storms were almost all when I was a kid (I moved to Colorado after college). That meant of course that it wasn't my responsibility to prepare for it, that was for Mom and Dad!

Since we're the adults now, and we chose to move into the hurricane belt, it's on us to prepare. To help with that, there is a non-profit group here called Vieques Ready whose goal it is to have people better prepared than they were last year. Their checklist is a great place to start, but we're going to attack it in reverse order because you know, we're crazy like that.

Starting at the bottom, we have:

For food and water, FEMA and the Red Cross both recommend a 3-day supply. They obviously weren't in Puerto Rico during last year's hurricane season. More conservative, Vieques Ready recommends a one-week supply, and they were here during Hurricane Maria. But to be honest, after the stories I heard of the aftermath of that storm, that's just not enough for us.

The Mayor here was effectively AWOL for an extended period while people tried to recover, and he refused help from the feds when it was really needed. There were multiple graffiti sites in town saying “El Pueblo sin un Alcalde” (The town without a Mayor) and “Donde esta el Alcalde?” (Where is the Mayor?). It's not a good look, the lack of leadership, and more importantly it's not a good thing for the people. Remember, this island gets supplied by a government run ferry system, and when the boats don't come, neither does food, fuel, etc. Nothing about the PR government, the ferry system, or the Vieques municipality gives me great confidence that the island will be supplied with food and water within a week after a major storm.

Along these lines, we know folks who are planning on a 90-day supply of food and water; admittedly much of that is leftover MREs (Meals, Ready to Eat) from FEMA last year. We don't have the storage for that and even if we did, it is just going too far for us. So we started off our thinking at one month, changed it quickly to 28 days, a clean 4 weeks. Then we started doing the math and still didn't want to store that much food and water. We thought about 2 weeks, but eventually settled on 3 weeks, 21 days of food and water. If that's not enough we'd have to get off the island but we don't think that's likely. Also, the food we already have, and the average to high portion sizes we planned for, would help us go beyond 3 weeks. For better or for worse, this is our plan.

We have gallons and gallons of drinking water stored, plenty enough to get us through 3 weeks (more than a gallon a day per person, which is the recommendation). And we were storing extra water for washing, flushing etc. until we checked the cistern on the roof and found it has 600 gallons in it. So I think we'll be OK with hand washing, showers, and toilet flushing!

Regarding the food, that's 21 days times 2 people times 3 meals per day = 126 meals! You see why we didn't want to store more food than that? You can also see why just grabbing a couple extra cans at a time wasn't going to cut it. That's when we did 3 large shopping trips to really make progress on the list. Of course these meals have to be non-perishable, which means lots and lots of cans. To break it down, it's 42 individual breakfasts, lunches, and dinners, but of course we prepare everything together so we think of it more as 21 breakfasts, 21 lunches, & 21 dinners. 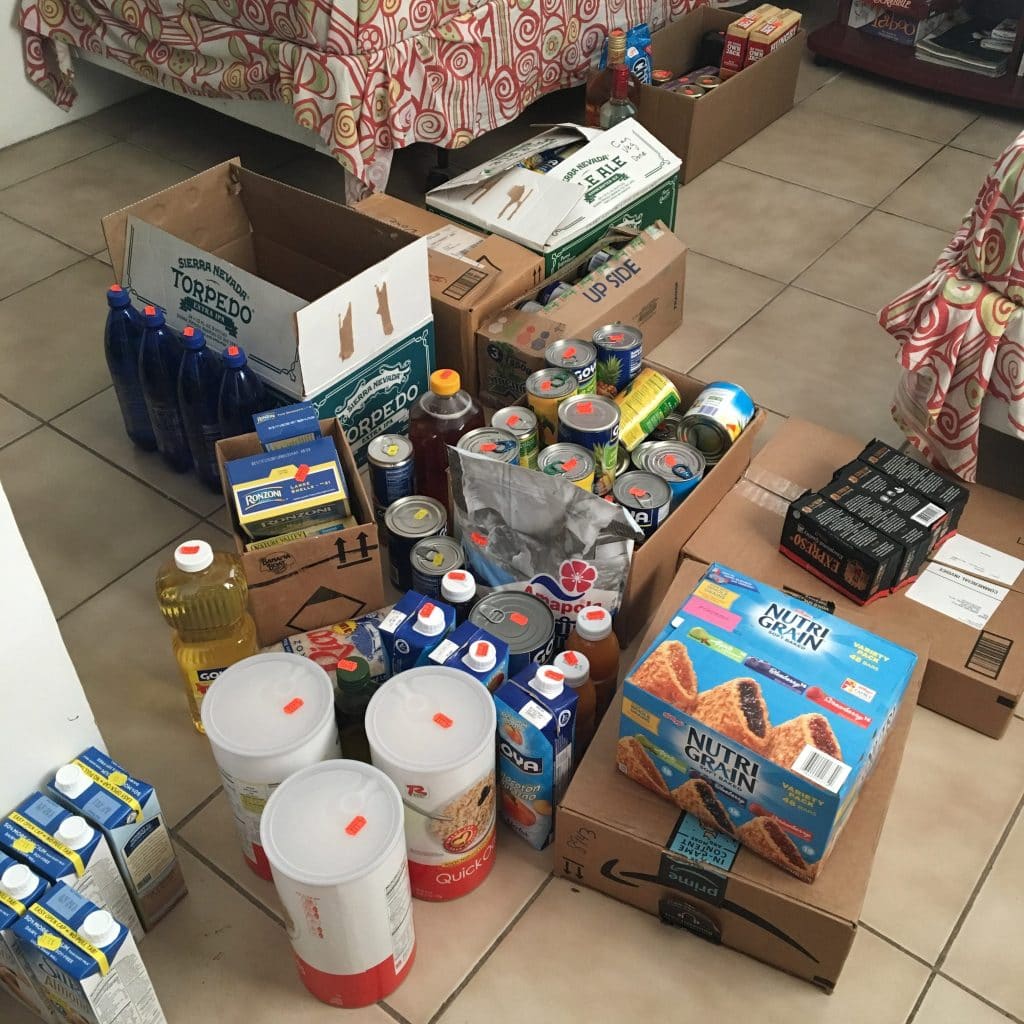 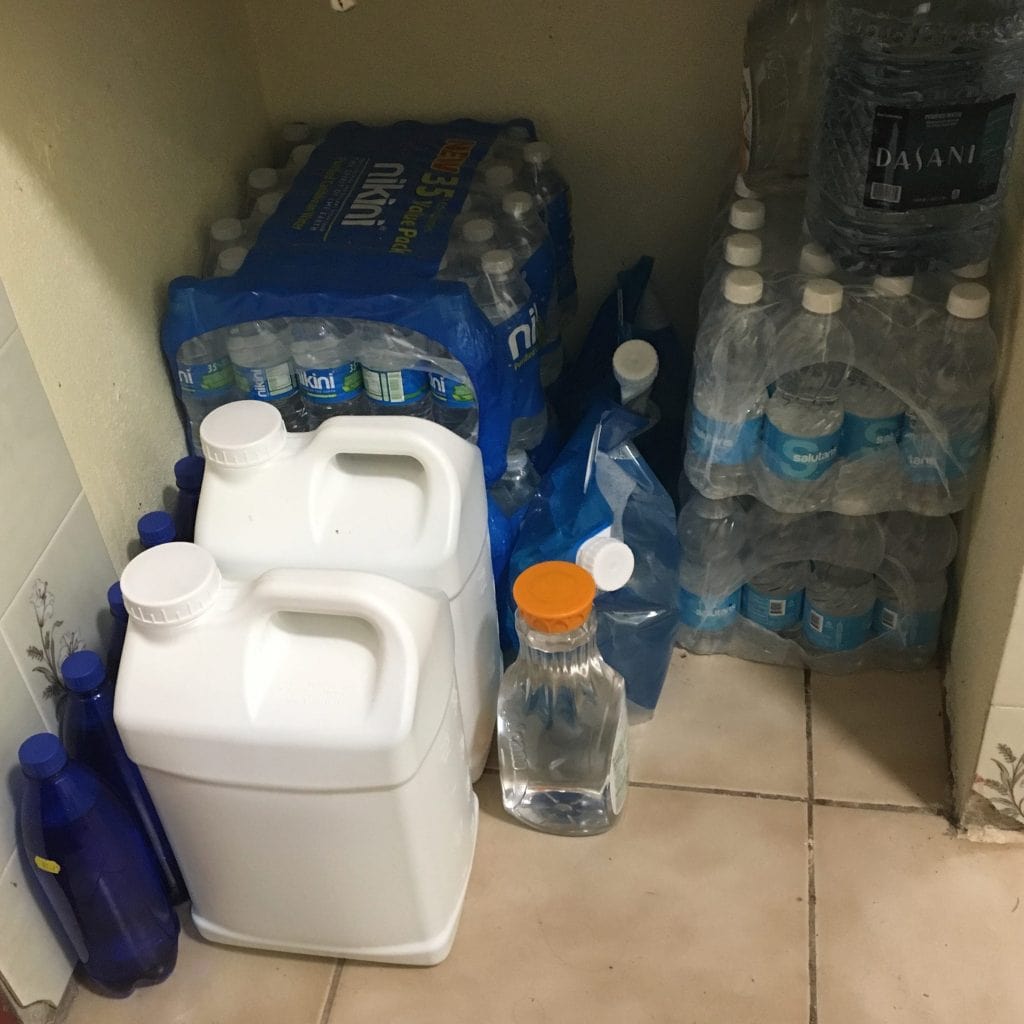 Water, in all its forms

We also wanted to make sure we're not buying things we would normally never eat. And we pay attention to the expiration dates, which has really become a habit living here. It seems those dates are more like guidelines than rules, so they often get ignored in the stores. But for things that we're going to store away for months or years, we wanted to make sure it was reasonably good food when the time came. And the cost adds up, when you consider you're buying it but not eating it. Well, we will eat certain things as we go along, but we'll replenish the stock as we use it. And we'll use it in an intelligent order. For example:

But before all that, we will use up refrigerator and freezer foods, in the first few days without power. We're pretty good at not letting food go to waste, and our fridge and freezer are packed with water and ice, to help ride out periods of time without power (as if that ever happens!).

But ultimately, we have the following stored away now: 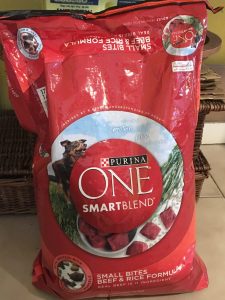 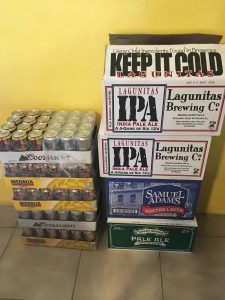 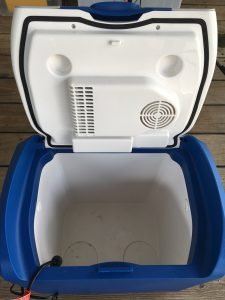 We have all of this, so we are almost done, but those beers aren't going to chill themselves. So we bought a thermo-electric (iceless) cooler that runs off 12V and will chill a few beverages at a time. It uses about the same power as our fan, so we'll have to trade-off cooler hours during the day with fan hours at night, running off the solar backup system batteries. When the batteries are fully charged, we can run the cooler off the excess sun energy during the day without depleting them. We still need to get some more bug spray, a couple of cans with 25% DEET in it (my personal favorite for pure effectiveness), but that's getting close to the end of the prep.

Finally, we need a short to-do list for when a storm approaches.

Once again, we're appreciating the simplicity of a small house – not too much to do in preparation! After the big winds pass, we'll bring the solar panels back out, set them up and we'll have (some) power again.

After Maria, there were no ferries for a while, which meant no gasoline, no power, no food being restocked in the stores. There was no water, and all the communications systems were blown away. But nobody died as a direct impact from the storm (health problems did cause many deaths later), so it's mostly a matter of getting through the worst of it. The prayers here are for no hurricanes for a long, long time, but we're going to be ready if it happens again. And the good news is that once we've done this once, it's much easier the next time. We use up food before it gets too old, and simply replenish it instead of having to buy 126 meals of spare food at once!

So, do we have it covered? What are we forgetting, you hurricane veterans out there? Or, are we nuts and just going overboard on all this? Either way, we're knee deep in it, and it's good.

Posted in RockLife and tagged Spending, Vieques
← Are We Crazy?New World Explorers →