We’ve been in Vieques, Puerto Rico now for three full months so we figured it’s time to see how well it does with our island shopping list. We’ve always said that we wouldn’t choose a place to live long-term without having been there for at least a couple of months, so at three months that’s long enough to get a really good feel for the place.

We’ll talk about the factors we care about when it comes to choosing a place to stay long-term, and there are quite a few of them. This post will be similar to the ones we did in the past on Utila, Honduras, and Roatán, Honduras, so you can look those up for comparison. 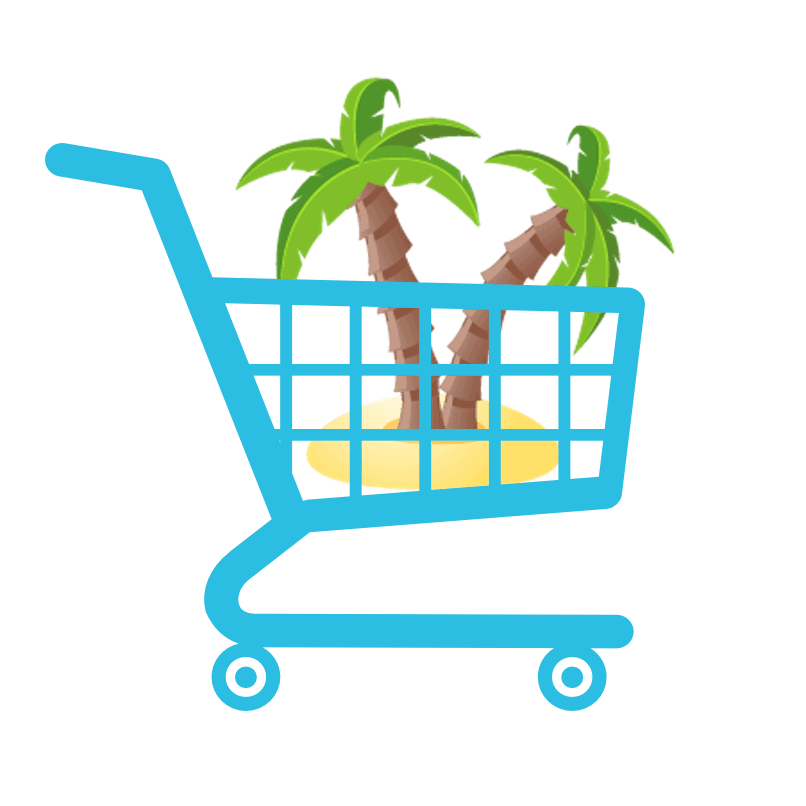 The big draw in Vieques is the beach, I should say the beaches, plural. There are dozens of them, with variety in the sand color and texture, the surrounding terrain, wave action, etc. Compared to the beaches of the Bay Islands of Honduras (where we were last fall & winter) this is a significant step up. No, it’s more than that, it’s really “one giant leap for mankind”, with apologies to Mr. Neil Armstrong. But Vieques is more than just beaches also, there are many strong attributes to this place, as we shall see when we go through the “shopping list” below. On the flip side are things like electrical power delivery, which is very unreliable. But as we’ve said before, you get the good with the bad, any place you go.

The turn of phrase that we are “island shopping” came from our friend Mamita in Utila, and we like it so we continue to use it. She found her island there, and although Utila wasn’t perfect for us we learned so much there we are truly thankful for the experience. But finding a place to settle and live long-term is a bit of a large “purchase” even when you’re only renting your house, so I put together the following list of important discussion points for Deb and I. As we’ve said, we didn’t want to boil it down to a raw number for each place but we did want to have points of comparison and discussion. The list is only very generally in priority order BTW. It flows from the needs to the wants, but some of them are pretty equal even though they are listed in order. So, without further adieu, let’s see how this rock measures up! 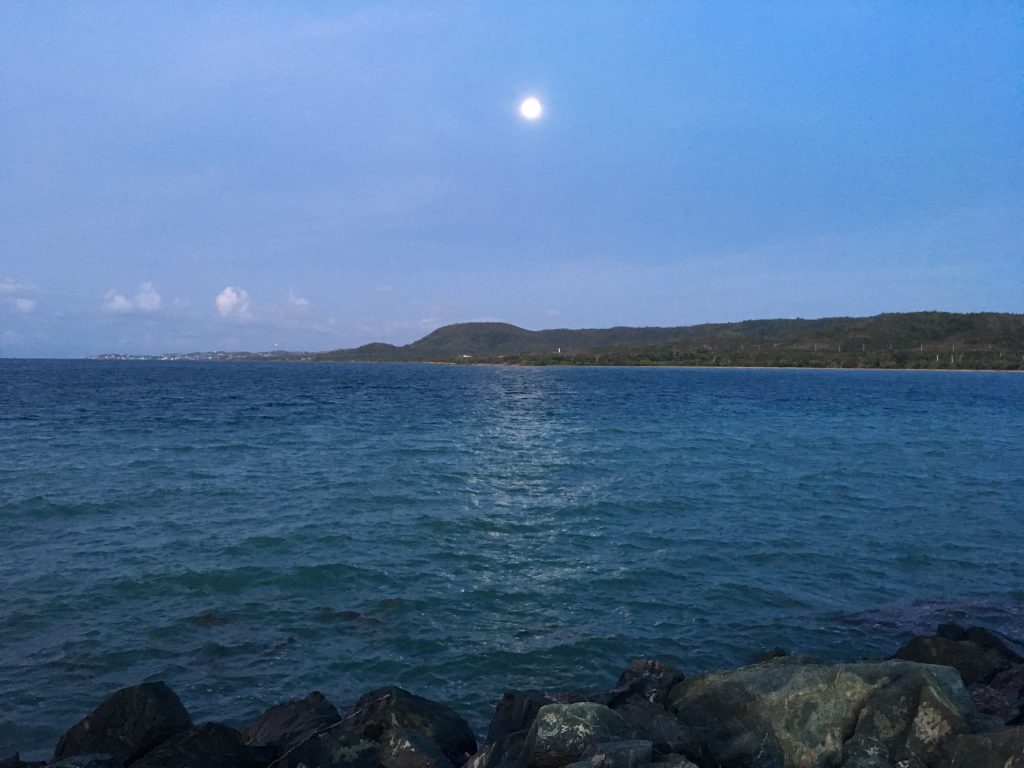 For Vieques, here’s our thoughts on each point:

The power company here is called PREPA (Puerto Rico Electric Power Authority) and this is where the trifecta does a big fat face plant. Not to belabor this point, but we lose power really often, sometimes multiple times in a day. One time, it was because a cat climbed up into the high voltage area and fried himself while taking down the power to the island. If we go 3 days without losing power, we talk about expecting it to go down any time, and we’re usually right. But sometimes it stays up for two or three weeks. Since the power cable from the mainland was severed, the island is running off large FEMA generators (diesel fueled). There was effort this week to switch over to PREPA generators while maintenance was being done on the FEMA machines (2-4 hours expected downtime). The wording was effectively this: “if the PREPA generators don’t work, we’ll have to wait for the FEMA maintenance to be completed before power is restored”. In the end, we never heard the full story, but the power was out for 5 hours so something wasn’t going right with the PREPA generators. We haven’t received an electric bill since we’ve been here but we’re told that is coming. And there’s a lot of confusion around it; we’re likely to get an “estimated” bill which could be fine or really bad, based on others’ experience. We just don’t know. I will say that the power company employees we know are great people and hard workers, it’s the management that everyone has the big beef with. Because of all this power chaos, we’ve invested in a small solar power system to let us ride through the gaps, and to keep our bills reasonable once they start showing up. (this is a future blog post for those of you who are interested in solar)

The coffee is good and cheap. The one we settled on (after trying many brands) is $3.30 for a 10 oz. bag of ground espresso beans. As for beer, there is only one place with draft beer on the entire island, similar to Roatán, but in general the beer scene is better here. It’s not Colorado, not even close, but I can regularly get Lagunitas, Sam Adams, and Sierra Nevada (a few beer styles from each of these breweries). There are some craft breweries on the mainland of PR, and I even found a Fat Tire in a bar here on Vieques one day. And now that I drank all the expired craft beer on Vieques, it’s all fresh now! 🙂 The Sam Adams I get for just under $10 a six pack, while the others are all in the $12-$13 range, and case pricing only helps a little. Of course, you’re not allowed to live here without drinking Medalla Light, the beer of PR. I actually like it, and it’s $21 a case, but there is a limit to it for me. Wine is good as well, and cheap because much of it comes from South America. We also have the Puerto Rican equivalent of Two Buck Chuck, but of course everything costs more so it’s four bucks. Our nickname for this surprisingly tasty Cab is El Cuatro. 🙂 But there are “better” wines too, that cost more for you wine snobs, ha! Bottom line, we’re happy and that’s what counts.

I talked above about the neighborhood, it’s really great with kids playing out in the street, nice neighbors, everything you could ask for. If the next door neighbor would haul away the shell of a car in the street (it was destroyed by the hurricane and subsequently parted out), it would be even better. The yard is perfect for the dogs, they can go out and explore, ignoring the cats and chickens, but Kirby sure gets mad when the horses are in the neighbors’ back yards. He growls at them and actually chases them off! That’s one for the ages, a six pound dog scaring off a thousand pound animal! The proximity from here to town is excellent, it’s a good bike ride, and when you go to town for an errand you get a workout. Trash here is not the issue that it was in the Honduran Bay Islands. Horses get into trash cans at night sometimes (it was dogs in Honduras, every day) but most people fashion a lid for their cans to keep them out. There is trash thrown down some deserted roads, there’s always somebody who doesn’t get it, but most of the people here care about their island home and don’t trash it. Every week it seems to get a little bit better as people and the municipality continue to clean up after the hurricane. The rent for our house fits in our budget, but we’ve said before that a little closer to the great beaches would be even better. We did finally buy a car, so that is mostly a non-issue now. We can bike to many beaches and now drive to the rest. 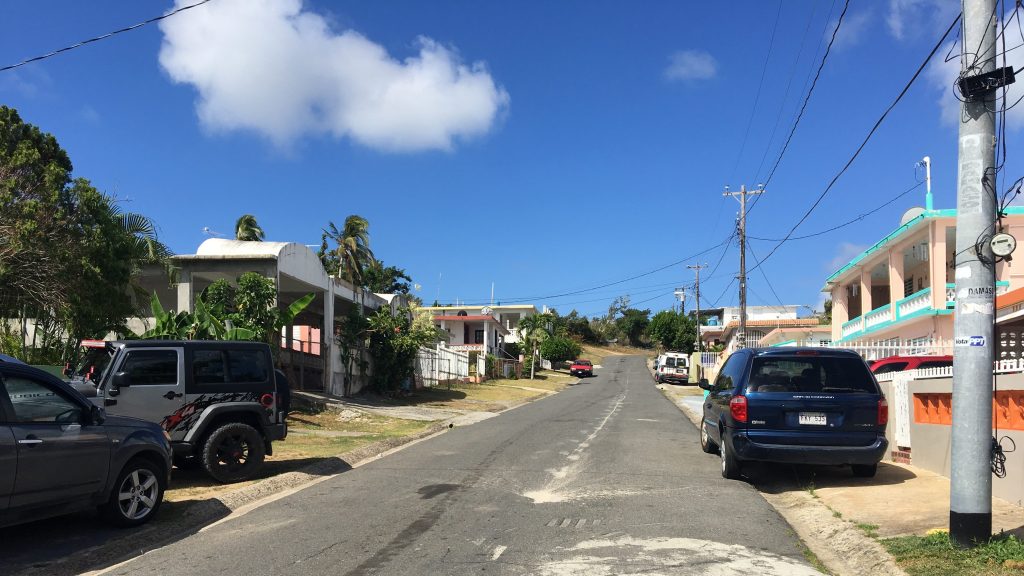 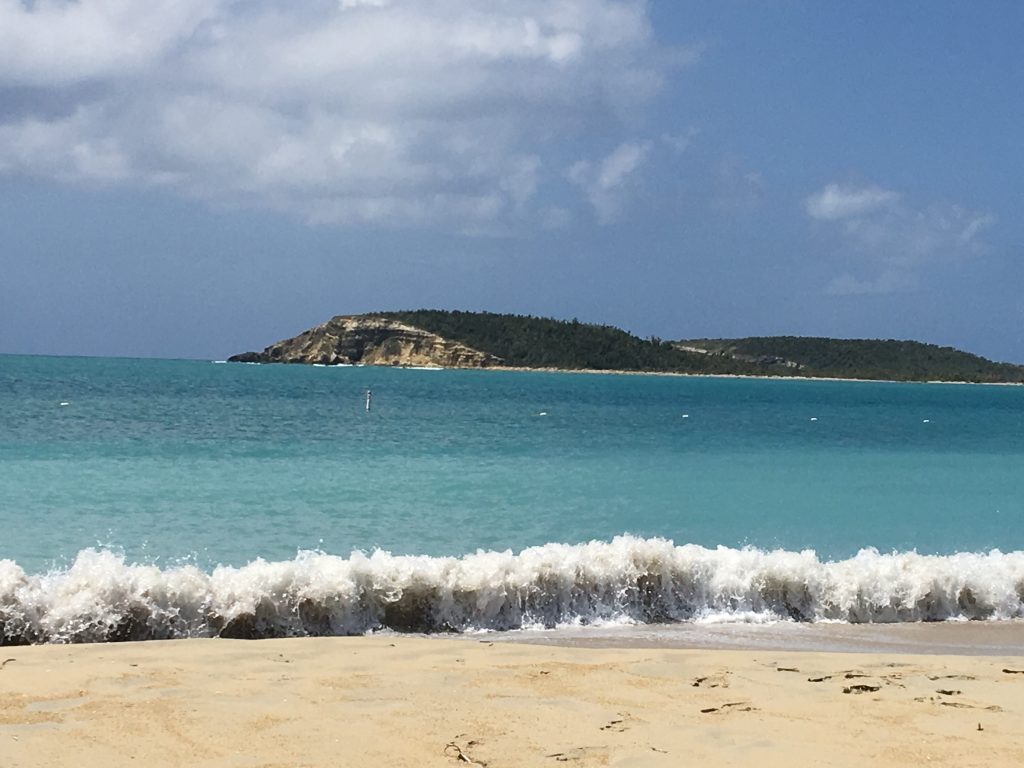 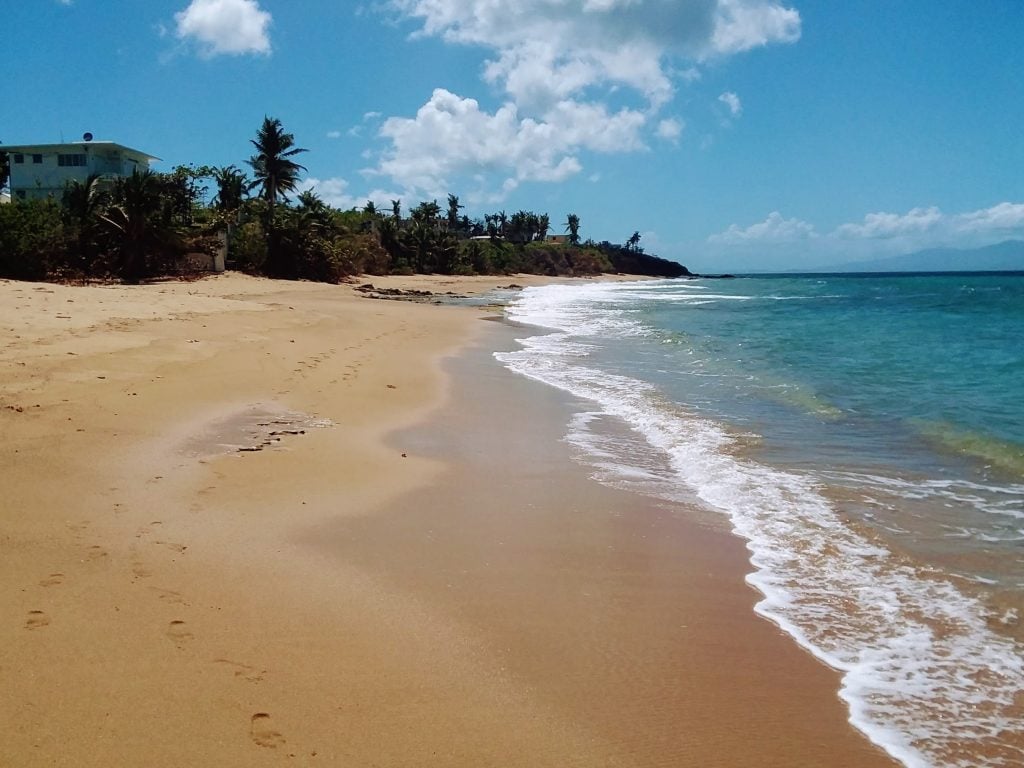 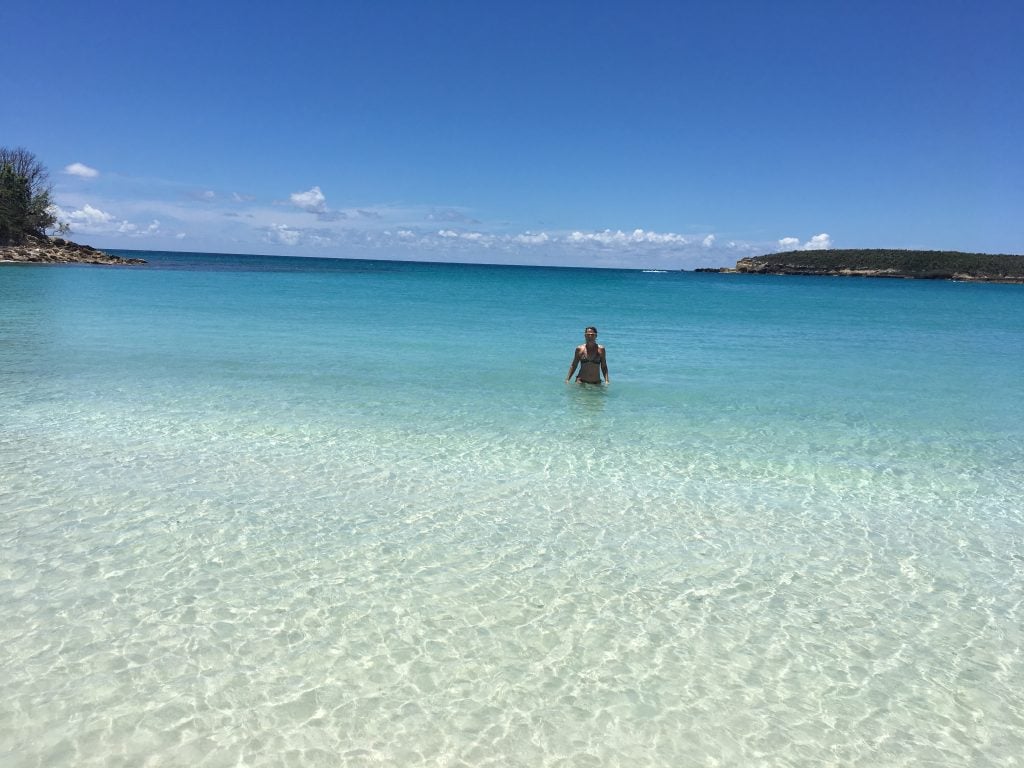 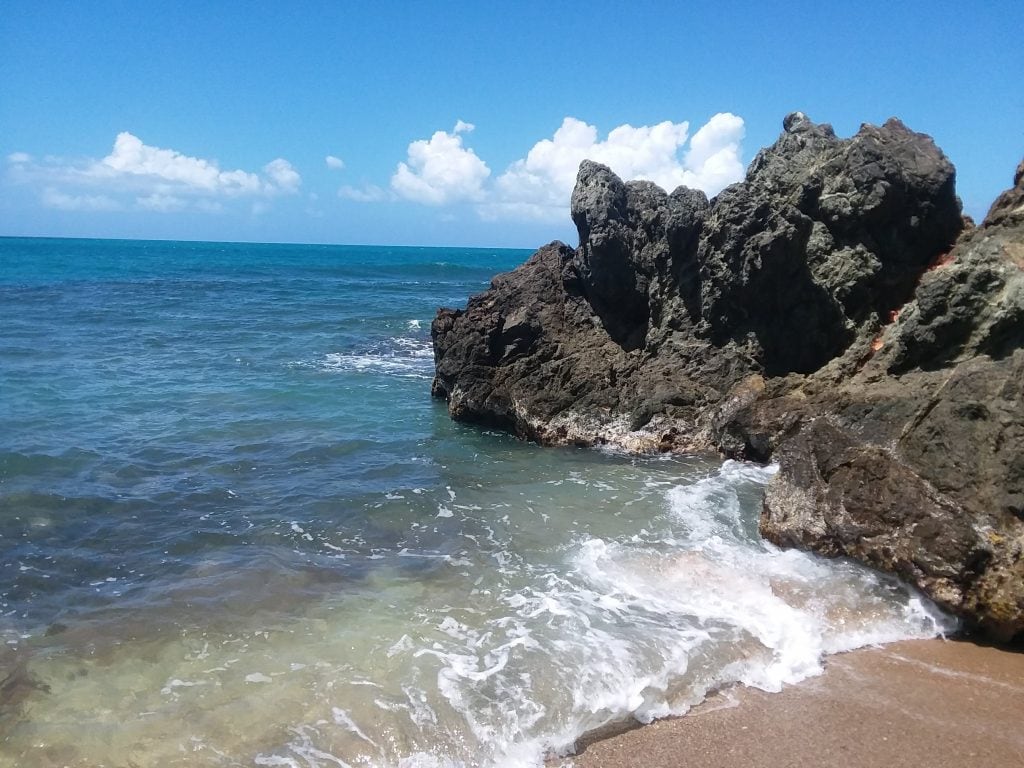 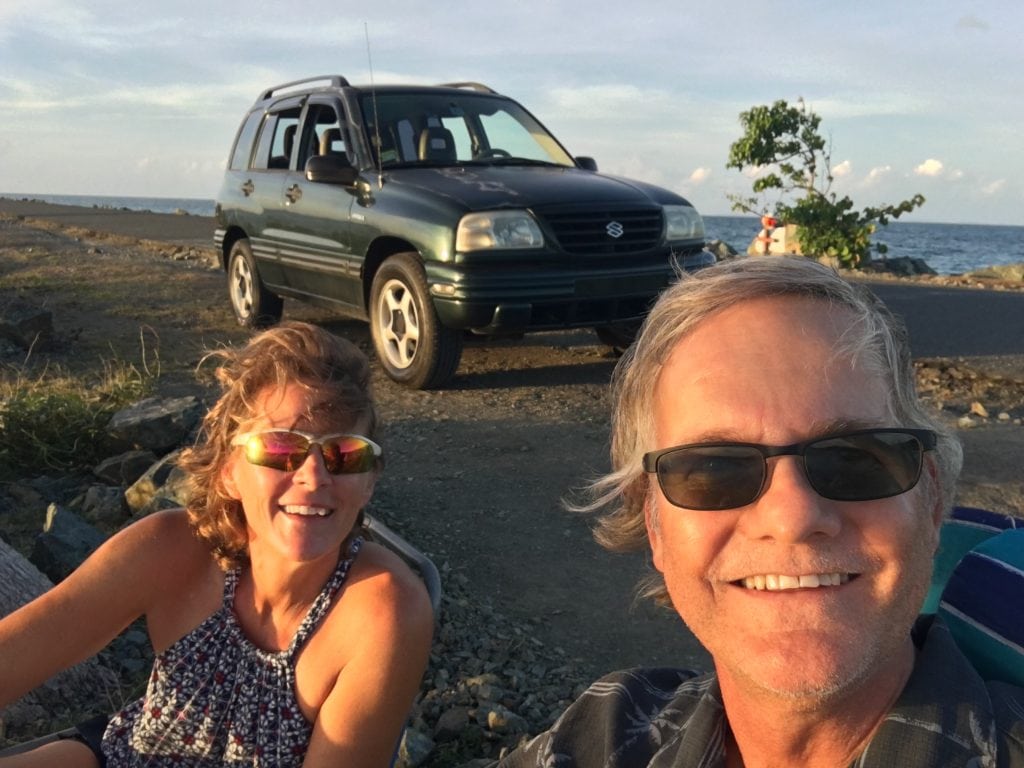 We’ve been saying for a while now that we are looking for a place we can’t leave. The summary on Vieques is this: with all the online research, the planning, the trials and tribulations, we feel like we nailed it! This is the place, at least for a while. The hurricane was a huge curse on Puerto Rico, but the subsequent re-routing was a blessing for us in a strange way. We learned about problems that are common to many or all islands, so when we see them again, even if in a different form, we already have come to expect them. Between this and our expectations of hurricane damage (which were certainly met), we came in with a better attitude than we might have. We get really positive vibes from the people, and are surprised at how much the local Viequenses have embraced us. The beaches are so good we sometimes have to stop and pinch ourselves. We live here, we can go to these beaches any time we want!

After all of our stateside roadtrips, Vieques was our third island landing point in these adventures (Ambergris Caye, Belize was really just a 3 day border run / vacation). We continue to grow comfortable living in new places with new people and new cultures. And Vieques has enough of the creature comforts of the states that we don’t really miss anything. Again, we were seasoned a bit by Roatán and especially Utila, so this place is easy to love. 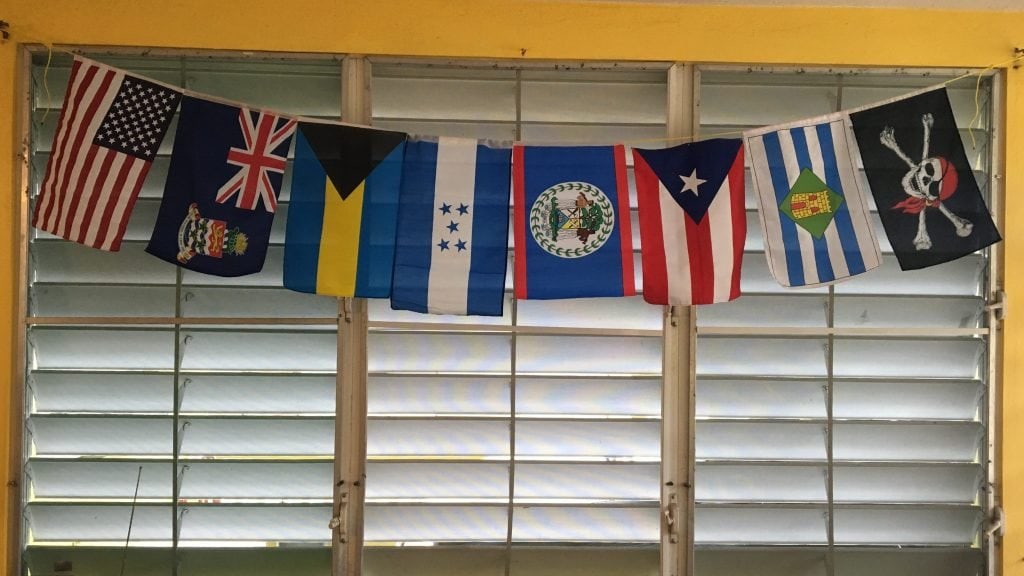 So here we are for a while; at this point we don’t even want to take the ferry to PR, we’re so done with traveling! Later on, we’ll start figuring out which other places we want to visit, but for now, we’re staying put. We still have lots to learn about Vieques and as we do we’ll bring it to our fellow kneedeepers, so hang in there with us!

TODAY’S SPECIAL: “Magic“, by Kenny Chesney – I believe there is magic here!