We may have overdone this rambling thing. We may have rambled too far north, even if it is only temporary. Seriously, how far north can someone live? In our case, NOT VERY far north! Or maybe it's just that we travelers and the universe are having a little failure to communicate. Let me explain.

We hauled on out of Wichita Falls, Texas heading northwest on U.S. Highway 287 which goes all the way up through Colorado, Wyoming, and Montana, almost to the U.S. / Canada border. It's a good road and scenic out there in northwest Texas. There were rolling hills and riverbeds, many of which were dry. And we saw some solar farms and loads of windmills out there on the flats, turning out electricity for all. Between wind, solar, gas & oil, Texas must produce an incredible amount of energy for the United States.

Many hours and many miles later, we found ourselves in southern Colorado going through places like Lamar, whose high school our boys used to compete against in baseball, at least once they got to the state tournament. They are called the Lamar Savages, a very non-PC name, but also very memorable. We started to recognize more sights as we drove north into Limon, CO where I bought a large coffee to get me through the last few miles.

I bought it at a McDonald's, one of the first places we'd found in seven states with available restrooms. Most of them have drive-throughs but the doors are locked. So rest areas became our friends. Inside, it was a little surreal, with nobody in there but maybe 2 other guys, seating areas roped off with crime tape, lights down low, and virtually all business being done through the drive-through. But they took my order, took my money, and I was on my way. It wasn't until we were almost back on the road that I discovered the coffee was room temperature; I guess they weren't hitting on all cylinders that day. I chugged down as much as I could, because really I just needed the caffeine.

A couple more hours and we were driving straight west toward the Rocky Mountains as the sun set behind them, so majestic! We were headed to Deb's Dad's house in Greeley, CO, arriving just before dusk. It was a wonderful reunion and we hauled our bags to "our" bedroom. It was the same room we'd been in before we left Colorado on the way toward Florida three years ago. We'd literally come full circle, planning to house-sit, pet-sit, and do jobs to pay our keep. We didn't really have to pay our keep per se, but we like to keep busy and help out where we can.

It was very chilly the first few days, to the point we were were using a space heater to keep our thin tropical blood pumping. Fortunately, we had stashed cold weather clothes in Colorado because a week or so later we got another cold spell. We found some great clothes we'd almost forgotten and donated the rest, staying somewhat true to our minimalist lifestyle. But seriously, it was the end of May / beginning of June and it was in the 40's! Why was the universe being so cruel? We'd lived in Colorado for decades so we knew this, but our bodies were not prepared. It seemed to us to be some sort of cruel cosmic joke - haha, suckers, you forgot what CO is like!

We also forgot what it was like to wear real shoes, preferring some form of flip flops for the past three years. I also got the classic dry-air electric shock when I was separating a fleece pullover from a t-shirt - zap! right on my nipple. I'm thinking of starting a Go Fund Me to help with the expenses of therapy, so please consider donating!

A friend called me soft (thanks a lot Randy!). I replied that my soft, soft feelings were hurt and that I preferred to be called "acclimated". So I guess we need to get re-acclimated now, at least for a little while, but in the meantime I found some clothes. In Colorado, they say there is no bad weather, only bad clothes. I don't think they are mutually exclusive - both can exist at the same time and that picture is proof. 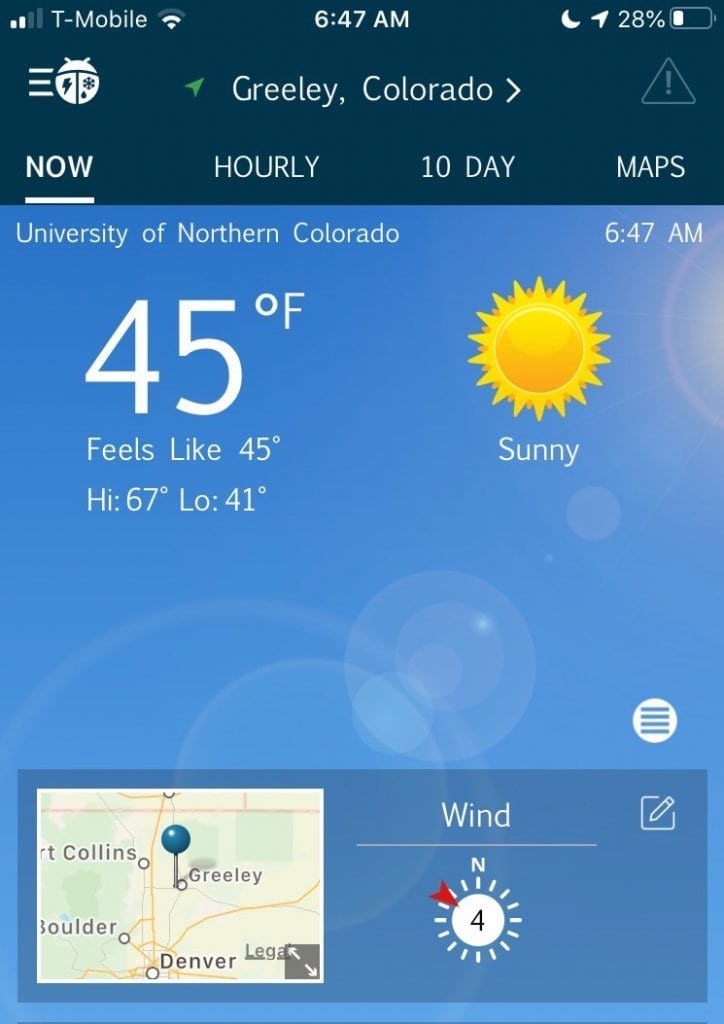 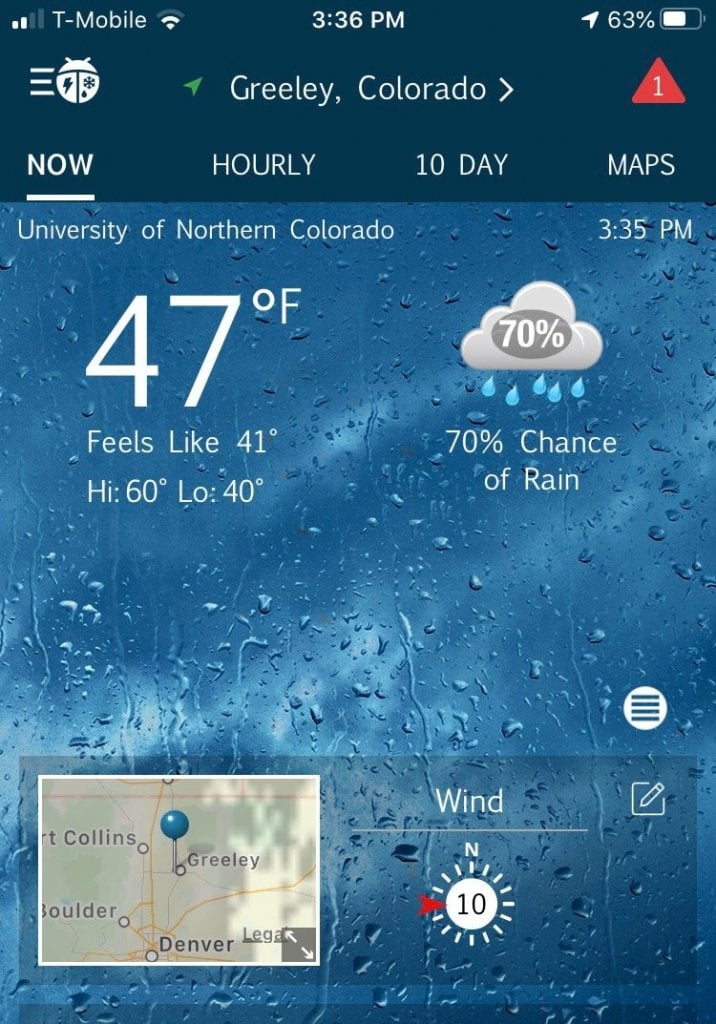 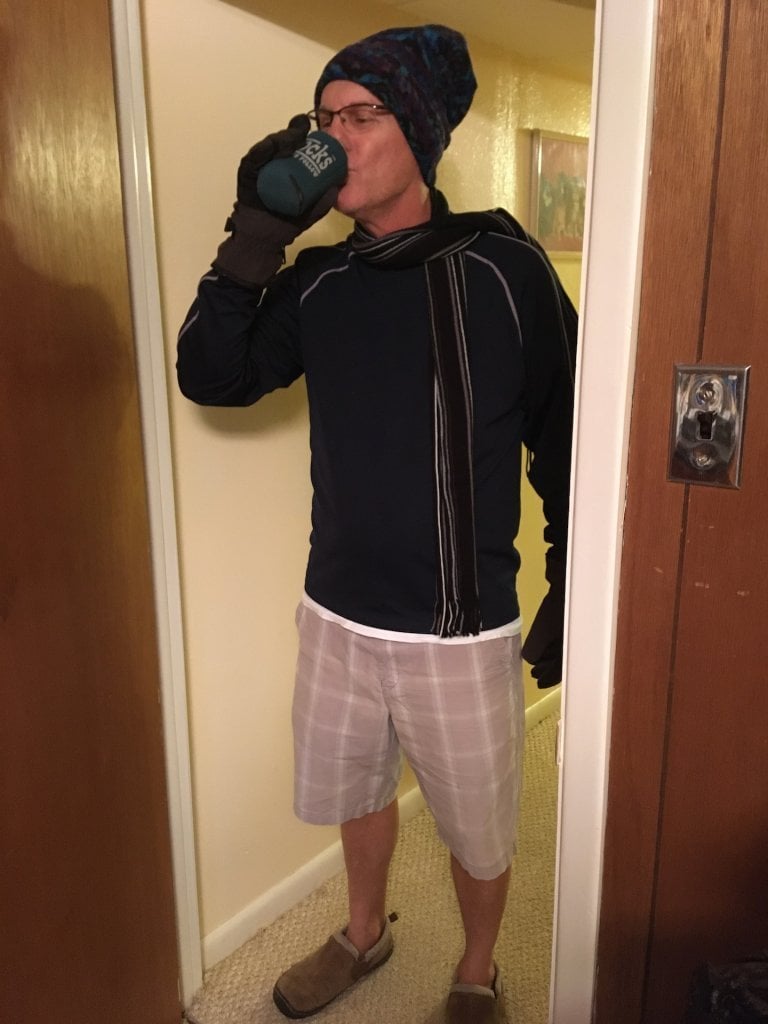 Lest you all think Colorado is frozen tundra all summer, in between those 45 degree mornings we had days in the high 80's and low 90's, so we were using a fan to stay cool and those clothes have to be changed a lot. Deb says this creates a Colorado sized mountain of laundry with all the partially dirty clothes we have to keep putting on and taking off. OK, so the weather threw us a curve, but we kept moving forward.

Deb's Dad and I were able to install a trailer hitch on the Honda. There was no doing this job without him and all his tools! It was a surprise to both of us how much body work we had to do. It amounted to a whole lot of un-snapping plastic body covers around the rear bumper and tail lights, etc. There were screws and bolts also, but if I ever meet an engineer who designs body panels I've got a few choice words saved up. Who out there likes those plastic clips that hold on body panels, yet break into pieces when you try to remove them? Well, if you have the dexterity of a brain surgeon you can probably get them out without damage, but most brain surgeons don't work on their own cars. Good thing too, because when one of those clips snapped, I caught my finger between the jaws of a pair of pliers. A week later the bleeding finally stopped but there is no feeling in that finger tip. My brain surgery career is over before it started! 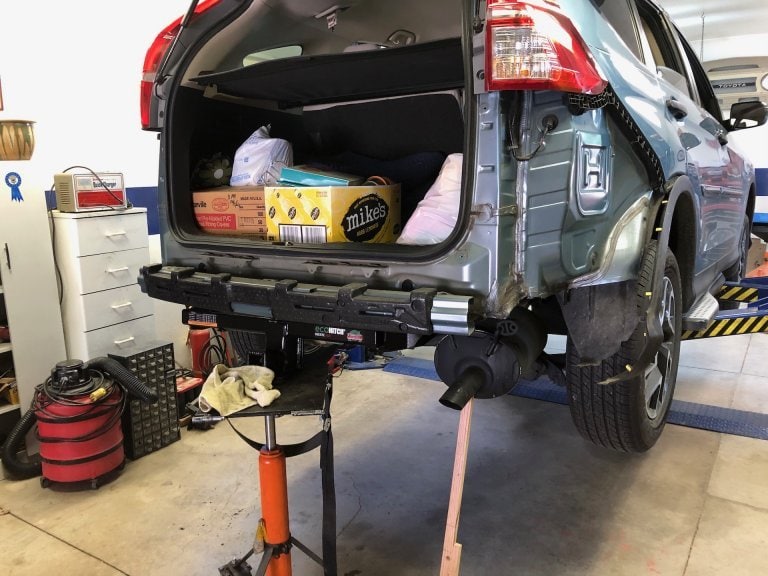 All this for a trailer hitch?

In the end, we got the thing installed with a hydraulic car lift, a small hydraulic lift for the hitch itself, and a stick to hold up the exhaust system while it was disconnected. Then, Deb and I went shopping for a bike rack to put in it. We found the type we wanted and went to a local bike shop. The first thing he asked us is what kind of bikes we had. We looked at each other exactly the way we did in Witness Protection when we were asked "Where are you from?". Just as the cashier had said then, "It's a simple question", yet once again we had no answer. Why not? We had no bikes! If this isn't a case of getting the cart before the horse, I don't know what is. So then we had a discussion on beach cruisers vs. mountain bikes (guess which type we settled on!) while the bike shop employee waited patiently.

Eventually, we told him we'd get some bikes eventually (!), but for now we wanted this thing to haul our golf carts. That term is clearly unclear as he immediately asked how much they weigh. I'm sure the first thought in his head was one of those miniature cars people drive around golf courses and retirement communities. Then, realizing this rack wasn't going to haul a 900 lb. driving cart, much less two of them. he probably pivoted to some oddball variant of a powered golf cart. But I told him that they weigh less than a mountain bike (they are less than 20 lb.) and I'd go get one of them from the car. I brought it in, and he measured it as we discussed how to attach two of them to the rack. Finally, we settled on it, installed the shiny new rack in the shiny new hitch and went on our way! 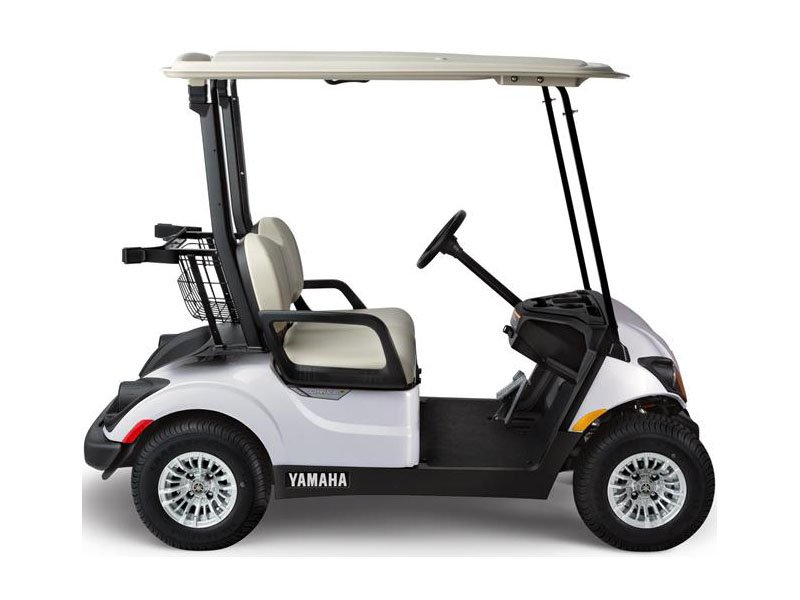 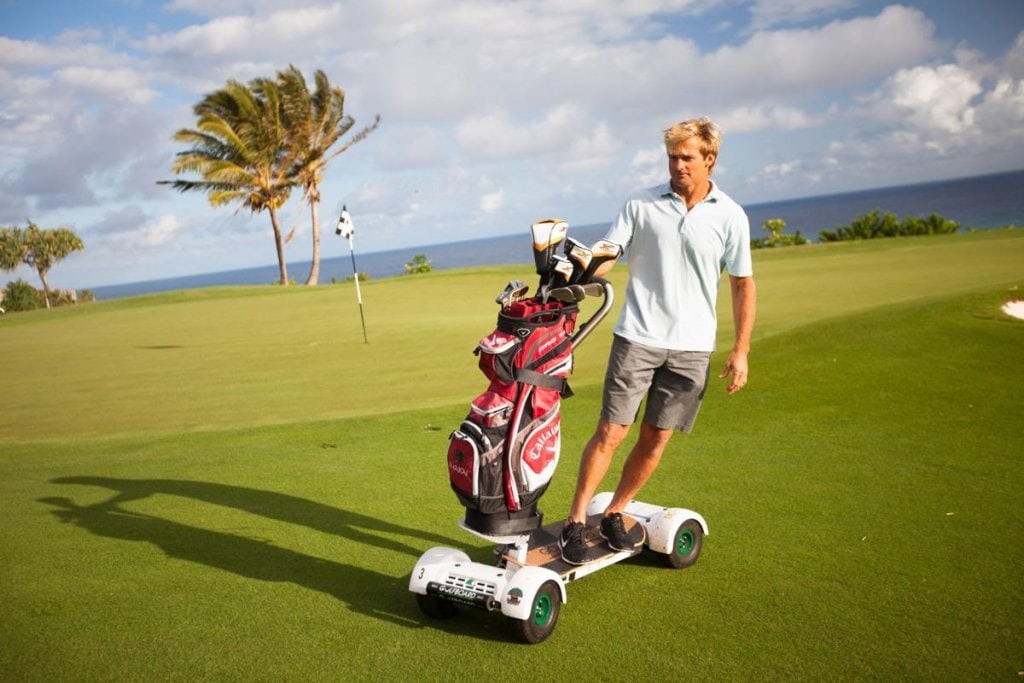 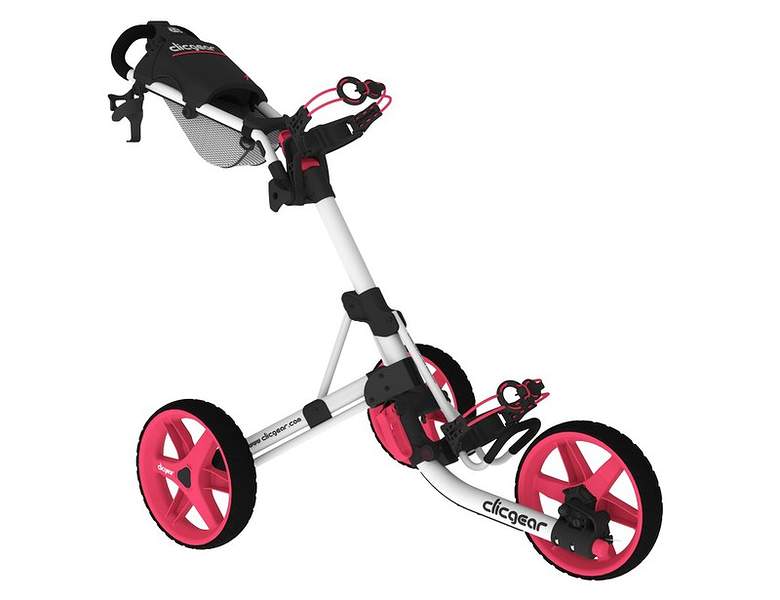 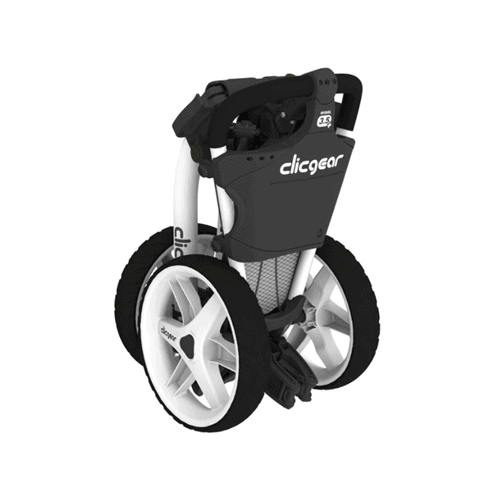 And this is how we haul it

Where were we headed? Presumably to go play some golf, but for now we are safe, happy, having lots of adventures, and are sometimes warm. Long ago when we said we'd like to be 23 degrees and south, we were talking about the latitude, but apparently the universe thought we meant the temperature. It was just a failure to communicate.

TODAY'S SPECIAL: "23 Degrees and South", by Billy Currington. "Catch a wave and ride the crest. Hang ten and hook it to the west. Sell it all 'till there's nothing left, long as you're here with me."